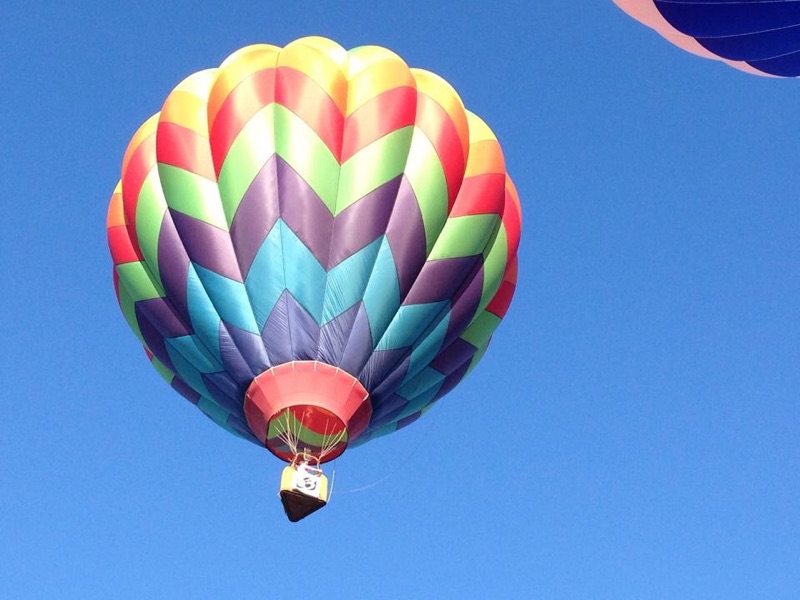 This is the third place winner in the 2017 Narrative Map College Student Writing Contest.

But that’s not all I left.

I left the smell of cereal on hot mid-summer days…

My friends and I compete with each other, trying to see who can name what type of cereal Kellogg’s is making. The air is sticky and thick with grainy starch and sickly sweet sugar. The first person to recognize this wonderful scent shouts, “Frosted Flakes!” And then, of course, we all pine for a heaping bowl of the stuff; but mouths watering, the taste of the air will have to do.

I left celebrations of the World’s Longest Breakfast Table…

One wonderful day every summer, I wake up much earlier than a kid on break normally does, and I crawl, half asleep, into my dad’s car. We travel downtown for an event called the World’s Longest Breakfast Table, where the streets are flanked with, well, long breakfast tables. My dad and I are energized by the cool morning and the increasing warmth of the sun. We sip coffee, the caffeine sinking into our veins and into our psyches, filling us with euphoria. We navigate swiftly through dense throngs of people, eyeing all the food. We show the world we are multitasking champions because we can walk through a stuffy crowd while balancing our coffee cups in the crooks of our arms, our hands occupied with flimsy paper bowls of cereal. We stuff ourselves silly with a hearty breakfast, mainly the expensive types of cereals my parents can’t justify buying. For me, that cereal is Krave—you know, those crunchy little nuggets with a gooey inside, the ones that come in only two flavors: chocolate and double chocolate. While I polish off my last few bites and begin delightfully slurping the remaining chocolate milk—the best part of the cereal—Dad chows down on some Reese’s Puffs, shoveling mounds into his mouth faster than I can say, “Let’s get some Pop-Tarts.”

Every year, Battle Creek becomes a launching pad for hot air balloons and their pilots. There are always balloons like Tony the Tiger, Sugar Bear, Post, and others made up of checkered and striped patterns. It’s a tradition for my dad, brother, and I to get into the car and drive to the balloon launch. We always get there early, eager with anticipation. Sometimes, we even wait an entire hour to see the balloons slowly ascend into the sky. Once they finally launch, we pick a balloon we really like, and we “chase it.” With my dad behind the wheel, we follow Tony the Tiger in the car until it lands. This task is more difficult than it sounds. We often get stuck in traffic or take a wrong turn until our balloon is out of sight. Then, we race down back roads until we find it again. Once our balloon lands—in a park, in a parking lot, in someone’s backyard—we “land” there too. This is my favorite part because I get to meet the pilot, who is basically a celebrity to me. He gives me a card that has a picture of the balloon on it, and he signs it. Before we leave, we help the pilot pack up the balloon. When we get home, I place the card with the rest of the thick stash I keep hidden under my bed.

I left the Festival of Lights…

On frosty winter nights, I trek downtown through the snow with my dad and brother, peering at the lights the city puts up every year. We “ooh” and “aw” at snowmen, reindeer, and geese decked out in reds, blues, and greens. Though my heart is joyful, my little fingers are frozen and my nose is snotty, so we walk to a restaurant called Clara’s on the River and sit inside, gratefully gulping down hot chocolate. The warmth sets in, and my bones are joyful, too. Done for the night, we drive back home for bedtime. My dad tucks me into bed, and I whisper, “See you at the lights.” We always say this to each other. We play this game in which we pretend we visit the Festival of Lights in our dreams; we agree to meet each other at a specific light. The next morning I wake up, and over breakfast he grins and tells me, “I saw you at the snowman light.” Thrilled, I lean closer like I’m sharing top secret information and say, “I saw you there, too!”

These memories continually draw me back to a place I once refused to call home. There’s a reason people use clichés; they’re often true. You never know what you’ve got until it’s gone.

I left my home.

April Kragt is originally from Battle Creek. She is currently an English major at Spring Arbor University, where she tutors in the Writing Center and has been published in the campus literary journal, the Oak Tree Review.