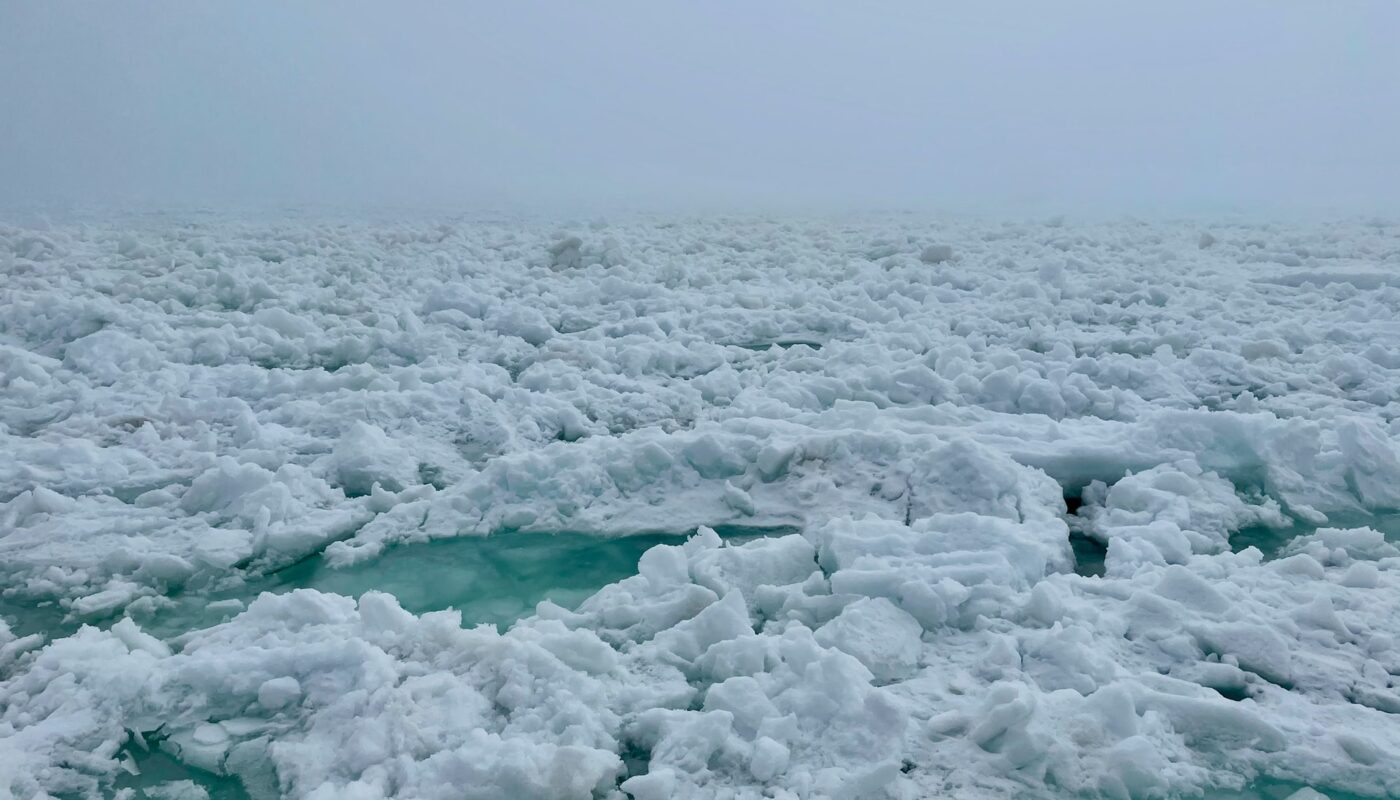 When I first arrived in Chicago in the fall of ’60, it reminded me of the Bronx. Low, dirty buildings, a disappointing sky, gray like living inside a light bulb. I’d come to Loyola on a track scholarship, to get out of the Bronx. I’d expected towers, canyons of steel, and gangsters on every corner. What I got was a cold wind off the lake. By mid-October the first snow had fallen. We ran anyway, dressed in layers. Most of the leaves’d already fallen from the elms in Lincoln Park and snow made running along the paths treacherous as we slipped and swore our way North toward the Edgewater Beach Hotel.

But the lake itself was a relief. I spent gobs of time walking the beaches of Rogers Park, alone, wishing I were somewhere else. By December you could see ice packs along the shore and when I returned from Christmas vacation, the ice floes extended to the horizon. You could’ve walked across the ice to Michigan. This wasn’t black ice like on the ponds and lakes I’d skated, but huge mounds of ice formed when the waves tumbled against the shore and suddenly froze, repeated endlessly in unpredictable patterns. The lake looked like something prehistoric, a moonscape sculpted by some wigged-out Rodin. When the wind swirled the loose snow into maelstroms, the lake looked truly out there, ghostly, something other.

One night in February, when my roommate Stan Finley’d gone home to Oak Park, Freddie and I cracked open a bottle of Chianti I’d smuggled back from the Bronx in my suitcase after Christmas. We were both half milers, the only two guys from out of town, and we were in American History class together.

We pushed the cork into the bottle slowly with a knife and drank out of wax Dixie cups. Stan Finley was a tall, studious fellow, bent over from the shoulders. Weidemeyer’d nicknamed him Petronius. He owned a small record player about the size of a picnic basket. Freddie and I played Miles Davis’s Porgy and Bess, a record I’d borrowed from Weidemeyer. We’d never heard anything like that before, Miles’s soaring runs up the ladder and then his haunting, brooding moods. We played the record over and over, flipping it from one side to another as we drank and talked about how much we hated running track, how much we hated the wind and the cold of Chicago.

After we killed the Chianti, we headed out for a walk. It’d been around ten degrees the last three days, but that afternoon the weather’d broken and it was almost a tropical thirty-five. We kept our loden coats open and walked up Sheridan to Morse and then turned toward the beach.

“Whada you gonna do when you get back to L.A. this summer?”

Freddie took a long gulp of air and let it get up into his head.

“Well, I’m gonna lay out on the beach for at least a week, let the sun recharge my batteries, let my brain drip out of my ear and forget about all this shit. After that, I dunno. What about you?”

“I’m gonna get laid this summer.”

“Oh yeah. Got anybody in mind?”

I was thinking of Lisa Cherone, making out on the front seat of my dad’s ’54 Merc, parked on one of those gothic roads out by Orchard Beach in the Bronx, her hand on my pants where the big fella throbbed. Lisa’d let me touch her peach-sized breasts that August. I’d written her every day in the fall but she’d only answered once, innocuously, and I’d hardly seen her over the vacation. Lisa had straight hair, black as a raven’s back and high cheekbones—her parents were from Chile. But I didn’t say any of that to Freddie, afraid of jinxing whatever chance I might have.

“Let me get this straight. You have nobody in mind but you’re gonna get laid this summer?”

“That’s only half the equation, buddy. My money’s on the girls.”

Once we hit the beach we noticed the full moon casting long mysterious shadows over the sand and the ice floes. It was an absolutely still night, unusual for Chicago, and we started walking out over the ice, our boots crunching into the crumbles of ice. Then, all of a sudden, Freddie said, “Let’s go” and he ran up the nearest mound and I followed and then we cruised down the other side, letting go the way Coach Amadeo’d taught us to run the hills. We kept running, the mounds getting higher the further out we ran, only this wasn’t running anymore, we were gliding over the ice, our coats billowing, our scarves and long hair flying out behind like vapor trails, and then I spread my arms wide, dipping and turning like an F-16, strafing the Commies and the Christians trapped in the valleys.

We ran far enough out on the lake to see the lights from the Loop, south of us, reflecting up into the night, orange and purple around the edges like a minor eclipse, and when I looked back to the dark shoreline, I imagined the city stretching out into the great prairies beyond. Chicago had never seemed so beautiful.

We were out of breath and panting, and just then the ice moved beneath our feet. Suddenly, we were cold sober. I could feel a tightness along my spine and we held our breaths to make sure it had really happened, and then it happened again, like a tidal wave was heaving beneath us and we could hear the ice crumble, echo, and groan like the esoteric cello music Stan Finley’d played for me.

“Let’s get the fuck outta here,” Freddie shouted and we took off toward the shoreline, only this time weaving our way between the mounds of ice, our chests heaving and burning, our hearts in our throats, stumbling and slipping, like running in a dream when no matter how fast your legs are pumping you don’t gain any ground. When we finally hit the beach, we threw ourselves onto the sand, gasping and panting, eyes tearing, and just lay there till the world came back to us. I finally pulled myself into a sitting position and began brushing the sand out of my hair.

“We almost ended up on the front page of the Sun-Times.”

“What happened out there?”

We regained our pins and staggered away from the lake, and even though we were sweating like we never had in track practice, we had icy chills deep inside us that sent us shivering toward the lights of Sheridan Road. Both of us buttoned up our coats, wound the scarves around our necks, and buried our hands deep into our pockets.

“I could use some coffee.”

For sure, neither of us was going to Mass in the morning.

Photo by Dennis Groom on Unsplash

Peter Fiore is the author of three books: text messages, a book of tanka poetry published by Mushroom Press; flowers to the torch, a book of tanka prose published by Keibooks; and when angels speak of love, a novella published by Loose Moose Press. His prose has appeared in numerous journals, including The Massachusetts Review, The Westchester Review, great weather for MEDIA, and Still Point Arts Quarterly. His poetry has been published in Rattle, Atlas Poetica, American Poetry Review, Skylark, and others. Peter lives in Mahopac, New York where he writes, paints, and plays tennis, in order to meet interesting and exotic fellow travelers.