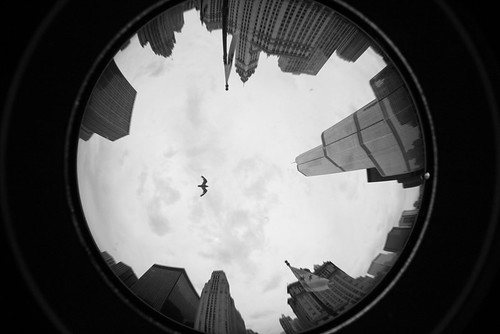 I remember the morning that we climbed out of a brook bed,
after following it up the mountain for hours, and, feeling
strong, pushed headlong into high waves of stunt, dense fir
further up toward the ridgetop. Leading, my father seemed sure,
as he shouldered through the thick tree mat, of the way ahead
although there was no path, and head-high balsam, concealing
tangles of crisscrossed logs that we groped for with our feet,
made moving slow. Trail obliteration was my dad’s conceit
that summer, his way to push back against the overuse
of wilderness, and so, when we crossed the ridgeline’s herd
path, we stopped to pile up trunks of dead, down spruce,
filling the trail’s gap. At work, we heard the spiral of a bird,
and, hand up to hush us, my father declared gray-cheeked,
relict naming relict, with a relict’s sense of the fragile and unique.

If a mad scientist scaled one up to human size,
its habit of flying hundreds of miles
nonstop would be harder to ignore.
A four-minute mile for eighty hours straight
is how one scientist tried to extrapolate
the blackpoll’s pace to ours. I think Roger Bannister,
running Bangor to Baltimore and back in three days.
And often it’s after crossing a continent of spruce and fir
that the bird heads out over open ocean to lay
over in Puerto Rico or Hispaniola, wherever it hits shore,
only to start again, this time aiming for South
America. Sometimes the bird’s mouth
opens, and nothing can be heard, its song’s highs
too high for our ears. Another surprise—
the lack of bluster, after so many rigorous trials
survived, in the thin trill I hear a little after sunrise.

To reckon by echo in falling snow, a trapper has to raise
his voice, aim it, and time its return as it ricochets
off the mountains around him. And to not drift sideways
in a valley and begin to circle, he has to appraise
his position by calling, listening, and adjusting to keep right
and left response times equal or steady. In winter it pays
to zero in often by voice because the woods, almost always,
begin to look more and more the same in dimming light,
making it easy to get turned around which can mean a night
out—blanketless, awake—keeping a fire at full blaze
in front of makeshift shelter, trying to avoid frostbite.
Dead reckoning’s a set of skills gained, during long days
in the woods, and, after these, from evenings of hindsight
about close calls in which the tolerances were too tight.

“A bird in Gotham City.” by sushibarista

Charles Weld's poems have appeared in many literary magazines (Snakeskin, Southern Poetry Review, The Evansville Review, Worcester Review, Tampa Review, CT Review, Friends Journal, Vita Brevis, Better Than Starbucks, etc.). Pudding House published a chapbook of his poems, Country I Would Settle In, in 2004. Kattywompus Press published another chapbook, Who Cooks For You?, in 2012. His poems were included in FootHills Publishing’s anthology Birdsong in 2017. A retired mental health counselor/administrator now working part-time in an agency treating youth, he was born in Buffalo, raised in Rochester, and lives in the Finger Lakes region of upstate New York.