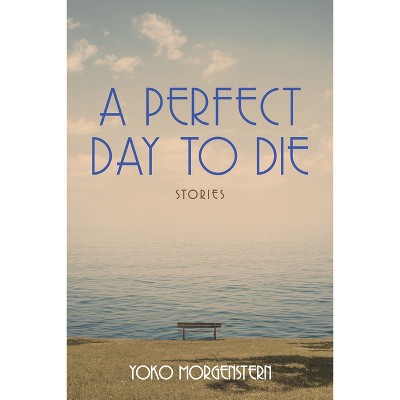 In Yoko Morgenstern’s new book, A Perfect Day to Die, fifteen short stories capture the small but consequential turns that make up a life. Writing with great economy and care, she creates important moments that are camouflaged as ordinary. Reading these stories, I felt as one observing nature when a rare animal passes by and I stop to ask, what just happened? And then turn back to retrace my steps.

Yoko writes in her second language, her first being Japanese, and when I interviewed her about the book, I asked how she first conceives of a story, whether she is thinking about it in English or in Japanese. She answered, “When I write in English I think in English from the beginning, otherwise it is translation. It is a stylistic choice.” While living in Canada, she fell in love with the English language writing style and literature. “It’s different from Japanese. Japanese language sentences tend to be very long…but in English the verbs are so strong. One verb can express many things. That makes sentences short and crisp. I wanted to do that myself.” The carefully chosen language of each story made me slow down as a reader so as not to miss the strength of each word.

In the title story, a middle-aged woman plans to end her life by freezing to death on the shores of Lake Ontario. She has considered other methods but rejected them based on pain or inconvenience to others. In fact, she “doesn’t really want to commit suicide. More precisely she wants to quit living.” Her reasons are her own, not meant to be evident to the people she leaves behind. As a reader, I was right there with her–I have felt those feelings many times. But then, something turns. In the story, an acquaintance shows up. The woman is reminded of coupons she wants to use, of how sweet water can taste. Yoko wrote the story in 2011, shortly after moving to Germany from Canada. It was a depressing time, she says, and one day, while grocery shopping, she realized, “I have a point card. I’ve got to get the points for this shopping, and then I said, you wanted to die. Why do you care about these points? I found it funny, and I thought of this story. It’s those small things that remind you that you’re still alive.” In the end, the reader does not know if the woman in the story returns to the lake to finish what she started, but we see her, at that moment, make a different choice. The story put me in mind of Robert Frost’s lonely traveler “between the woods and frozen lake” on the “darkest evening of the year.” Will he stay there, taken in by a seductive coldness? No. There is, again, a turn. In the poem, it’s the shake of his horse’s harness bells, reminding him, “I have promises to keep / and miles to go before I sleep.”

In other stories, characters take similar turns. In “Nobu’s Writing Therapy,” a Japanese man, Nobu, has made the unusual choice to take his wife’s surname. In Japan, it’s a legal requirement for married couples to have the same surname, and Nobu is very rare for having taken his wife’s name. They live in Indonesia for his work, and when circumstances require their return to Japan, he remains where he is, even though it will end his marriage. In “St. Clair West,” Yukari, a Japanese student learning English in Toronto, receives a visit from an older, married man from home. She is not interested in resuming their affair, and in rejecting him, she is also rejecting the Japanese patriarchal culture she came from. In “Gustafson and the Chinese,” a woman who calls herself Cyndi is alienated by people who constantly remind her that she is not one of them, and finally breaks away when she notices the reason her husband goes through so many clean dress shirts. In these stories, the characters “are coming closer to their limit” Yoko explained. “Then they meet someone who has totally different values from theirs, and that opens their eyes.” At some level, they want to change, and Yoko skillfully deploys the short-story form in order to explore that moment of realization.

Speaking of form, several of the stories in the collection are very short – some are just a few pages. I asked Yoko if she considers them flash fiction, and whether that is a meaningful designation. She answered, “For me, everything is a short story. ” The story “Comedian” was published as flash fiction (with a maximum word count of 1,000), but ultimately for Yoko, “Everything is the same.” She said, “The reason I love short stories – reading and writing them – because they are moments not significant enough to write a novel, but I think life is a chain of short stories. I love moments. If I can reproduce the moment, then I am satisfied. The word count doesn’t really matter.”

Three stories in the book were originally published in Great Lakes Review. I was curious about Yoko’s location when she wrote these stories, and whether where she lived at the time of writing was an important influence. Originally from Japan, she learned English in her twenties while living in Toronto and lived there again in her thirties with her ex-husband and has since moved to Germany. In fact, she wrote most of the stories in this collection, including those set in Canada, in Germany. The move to Germany felt like a great displacement. She “had to start all over again,” which was very difficult. She missed her life and friends in Canada. “I needed to miss it to create those stories. [My location] influenced me in that way.”

That feeling of displacement shows up for her characters frequently. In “Soda Pop Candy,” a girl named Yuki relies on an imaginary friend to help her navigate the recent memory of being abused and humiliated on a school field trip in Japan. In “Kai’s Shoes” a boy resists going to his new school. His mother helps him navigate his feelings by acknowledging, “I’m afraid of going to work tomorrow too. They may not understand my English.” Yoko shared that after this story was published in Canada, a reader, a Brazilian diplomat in Toronto, emailed to say that his daughter felt the same. “I really enjoy this kind of connection with my readers. It happens, and it motivates me to keep writing.”

One measure of a good story or novel is that you are sad when it ends; you miss it, and you wish there were more. I found myself wanting more at the conclusion of Yoko’s stories. Her characters are like trees within dark, deep woods, and we see them briefly, as from the edges. I had a sense that there was much more to know about each of them. I asked Yoko what she is working on next, and she said the pandemic has been a hard time for writing, but she may have a new novel incubating. This reminded me of a recent interview with the author Jeff Chu who said, “Sometimes you are writing even when there are no new words.” I hope this is the case for Yoko Morgenstern, as her characters are well worth returning to.