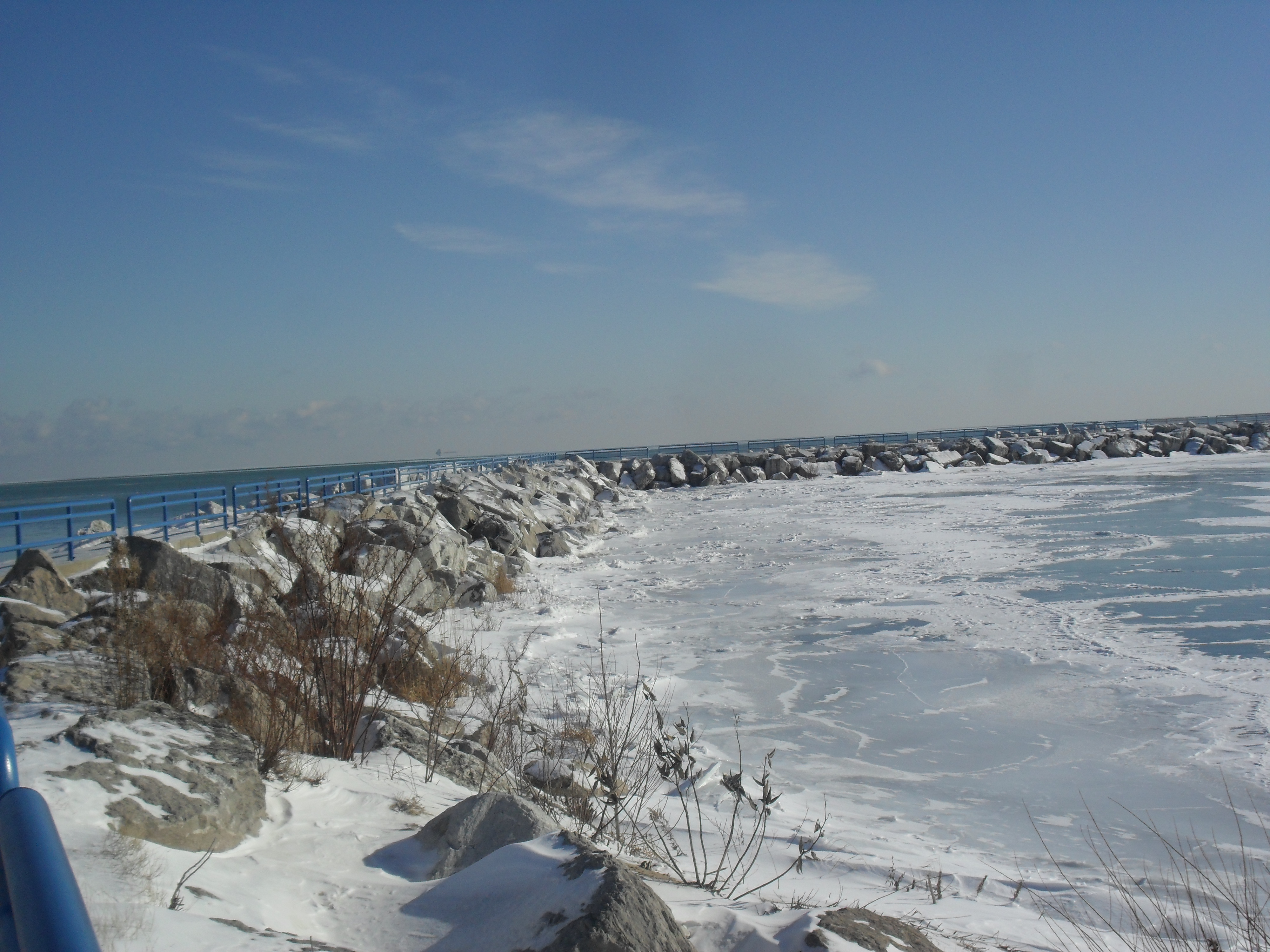 A brisk wind stings my face as I get out of the car. Blowing snow shears across the dunes and swirls around the parking lot. I tuck my chin inside my scarf and start walking. When I reach the top of the ridge, I stop to look, expecting to see the lake. But there is no lake, only a frozen landscape of jagged ridges and snow-covered valleys do I see. Waves caught in the freeze-frame of February resemble the arctic tundra, not my lake.

At first glance the entire expanse appeared frozen solid, but with a closer look the undulating movement of the surface in sync with the swells of the inland sea becomes apparent. It is not solid but shiftless, like the sands of Dune. The whole thing is heaving with the power of what lies beneath.

I walk out on the wooden planks and watch the wave action, for that is what it is, though there is no water, no crashing surf. The lake breathes like a ventilator but silently. So silent. There are no shore birds, no tourists, no power boats or lake freighters. I hunch my shoulders against the wind and look to the horizon, a distance of twenty-six miles. There is open water out there and jagged ice floes peak the sky like sailboats. This monster of a lake with the reach of an ocean has a changeable face. And I see I am not alone.

An ice fisherman walks the shore with his backpack and his pail and walking stick. He tramps carefully in cleated boots. He is prepared, bundled up like a Sherpa guide.  I am not. I don’t have gloves, I don’t have my long underwear, and I don’t have my boots. What I have is a new haircut with caramel highlights still damp from the salon, hidden by the scarf now wound tight around my head for this impromptu walk on the breakwater.

When I realized I was only three miles from the lake, I knew I would keep going. From earliest memory, my siblings and I strained for that first glimpse of blue through the trees on Sunday outings in our father’s station wagon.

I walk along the railing of the breakwater until the drifted sand turns to ice and the railing ends. With no railing, I stop. I’m afraid to go further, afraid I’ll slip, or my scarf will blow away and I’ll be tempted to chase it, afraid I’ll fall off the edge onto the shifting ice. All my life I’ve been drawn to this water, yet I fear it.

His name is Fred Bear. It said so on the back window of the pickup truck I parked alongside. Ours are the only two vehicles in the parking lot. Just drill that hole his bumper sticker said. Ice fishing is popular. It doesn’t cost anything to bring dinner home. He has this stretch of shore to himself. I’m not in his way. He doesn’t even see me.

I like a man bullish on winter, one who can bring dinner home. There are only the two of us out here. If I get in trouble, will he save me? If I get frostbit, will he unthaw me?

I start back to the car. I can’t keep up with him. He’s going where I’m not prepared to go. I walk past park benches and frozen fountains. I walk past the restaurant that used to be the summer hot spot. The view was destroyed when they built the marina and extended the breakwater and now it’s shuttered, like the dancehall and the roller rink. Only the lake is still here.

I walk past his truck with the bumper sticker and climb in my car and turn on the heat. I take off the scarf and shake out my hair. The damp tendrils at my neck are frozen stiff, proof of my walk on the breakwater. But I feel like a mere spectator, having done nothing to effect change, a fisherman with no bait. I couldn’t bring dinner home.

Yvonne Osborne lives and writes in the Thumb of Michigan. She has an organic vegetable business in the summer and writes in the winter. She has been published in numerous literary reviews, most recently in Steam Ticket, Third Coast Review and Pure Francis and her short stories have appeared in several anthologies. The Great Lakes region plays a prominent role in her writing, whether it be fiction (embedded in the psyche of her characters), creative nonfiction, or poetry. She is currently working on a memoir.