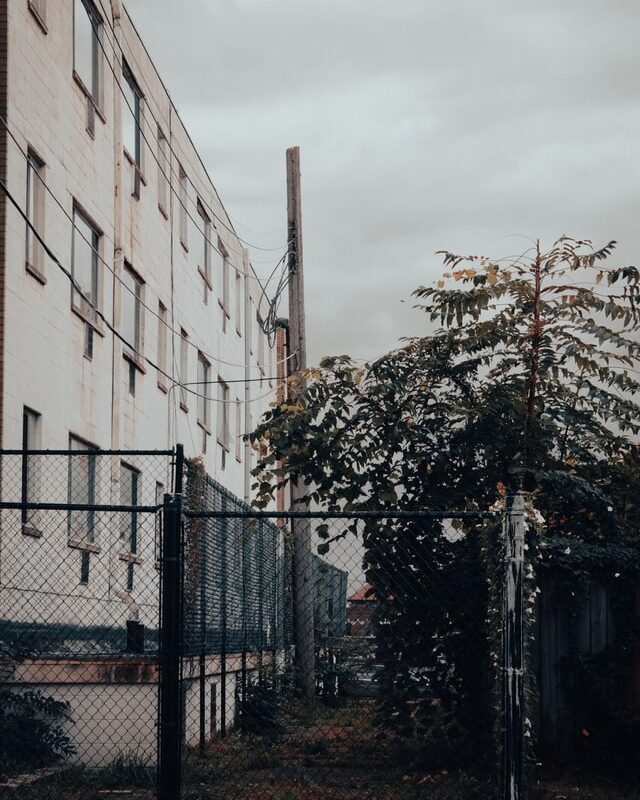 When I tell people where I’m from, I watch faces for inevitable recognition—notorious recognition—for how Flint is portrayed in the media, for good (rarely) or bad (usually) and many ambivalent shades in between. I prepare myself to defend my hometown. Years ago, at a book signing of esteemed Michigan writer Jim Harrison, hoping to make a connection with him through our shared state, I said to him, “I’m from Flint.” His reply crushed me: “I guess someone has to be.”

Many of these buildings no longer exist. Yet my parents’ house is still there, the one I grew up in, and now, standing in its kitchen, I feel like a giant among its undersized features. But this may be because I’ve spent so many years living in outsized cities, first Chicago, then San Francisco.

Driving the wide streets of Flint, I search my memories. I look for familiar businesses; some are abandoned to derelict storefronts or their structures are demolished, the foundations grassed over and abutting weed-cracked parking lots. The Flint Journal’s printing building has been reborn as a food market. The newspaper I’d grown up with and could have cared less about over the years but that was such an integral part of my Sunday afternoons has ceased its once reliable daily schedule and outsourced its printing, a casualty of technology.

In Flint, no design, no matter how carefully wrought, or inspired, goes unpunished. The mediocre ones have a second life for far longer than they have any right to. One of these, the first project I ever designed from paper to brick, a set of parking garages, still stands. Never mind that they are as drab as the apartment complex they are connected to. I can’t help but feel proud of the project three decades later, though while it was happening, I wasn’t even aware of the enormity of the opportunity; it would be another six years until I got to design another stand-alone building. Now, running an errand to scan some documents to send to California, I recognize that the copy place is in the Citizens Bank building that my old architecture firm designed, an oddity with rounded corners in the middle of a strip mall parking lot. I did some detail drawings for this pastel brick edifice when I worked for them while in high school. It wasn’t necessarily good design, but it was adaptable. This is from the same firm whose bread and butter were truck docks and re-roofing hundreds of acres of the aptly named Buick City, a complex of industrial buildings that covered several city blocks and whose roofs I spent hours walking for that job. The complex disappeared when I wasn’t around. I am sure that the wreckage was hauled away by trucks whose very components were manufactured in those plants.

There is a saturated housing market over a decade after the recession. Houses go up for sale, sit quietly for months, years. Anyone I talk to in Flint knows of one or two of these. Houses are worth half what they were two decades ago. (And this was before the water crisis.) The neighborhoods aren’t terrible—it’s that good jobs are hard to come by (and now there’s the water crisis). I used to know the occupants of every fifth house of certain neighborhoods, but I’ve been away too long. From my sister, I still get gossip about the old high school crowd that has embedded here for life.

My grandmother, who passed away four decades ago, is connected for me to a Coney Island on Fenton Road that’s only there in memory. I recall a torrid summer day when she ordered scalding hot water with lemon to drink. Down the road, there is the vast parking lot of the South Flint Plaza, the setting of a nerve-wracking first date that shed its romance by the hour as the evening’s slow train wreck prevailed. Driving Saginaw Street into downtown, I used to walk around the civic-minded Riverbank Park with my camera, capturing the demolition in progress of a row of historical buildings, with the sentinel-like Genesee Tower looming behind. Years later, I would skateboard with some friends illegally slaloming down the ramp of that tower’s spiral parking lot. A few years ago, Genesee Tower was imploded into oblivion and much ceremony, diminishing an already unimpressive skyline.

I prefer to visit Flint in the summer when the shocking greenery feels amplified by the heat. At my parents’ house, on Van Slyke Road, I sit in the backyard and notice that the birds’ songs are the same songs I heard in childhood. Just like then, faint lawn chemicals spice the air, and the hammer of perpetual lawn mowers strikes the hour. Formerly small trees now canopy cracked and crumbling driveways. Studious sky reading (weather, planes) becomes an afternoon pastime, particularly during a tornado watch. I hear flights of cars racing down Van Slyke—as if they are competing with the aircraft that follow an invisible highway above our house—and I wonder where everyone is coming and going to. I notice many more pedestrians walking along this road not designed for foot traffic. Van Slyke was a dirt road when I was a toddler, and one fine day I marched out of our house and down that road to go who knows where. A stranger brought me home—I met this man years later at a friend’s wedding—and I’m still not sure how he knew where I lived, as the houses all looked the same. At a young age, I was already trying to get away from the place.

Photo by Bruno Guerrero on Unsplash

Robert Detman has published fiction, poetry, and essays in over fifty publications, including Antioch Review, Causeway Lit, New Orleans Review, The Smart Set, The Southampton Review, Tusculum Review, and elsewhere. His stories have been finalists for the New Letters Literary Awards and nominated for the Best of the Net, and a story collection was a semifinalist for the Hudson Prize from Black Lawrence Press. He received an architecture degree from the University of Michigan and an MFA in Creative Writing from Goddard College in Plainfield, Vermont.