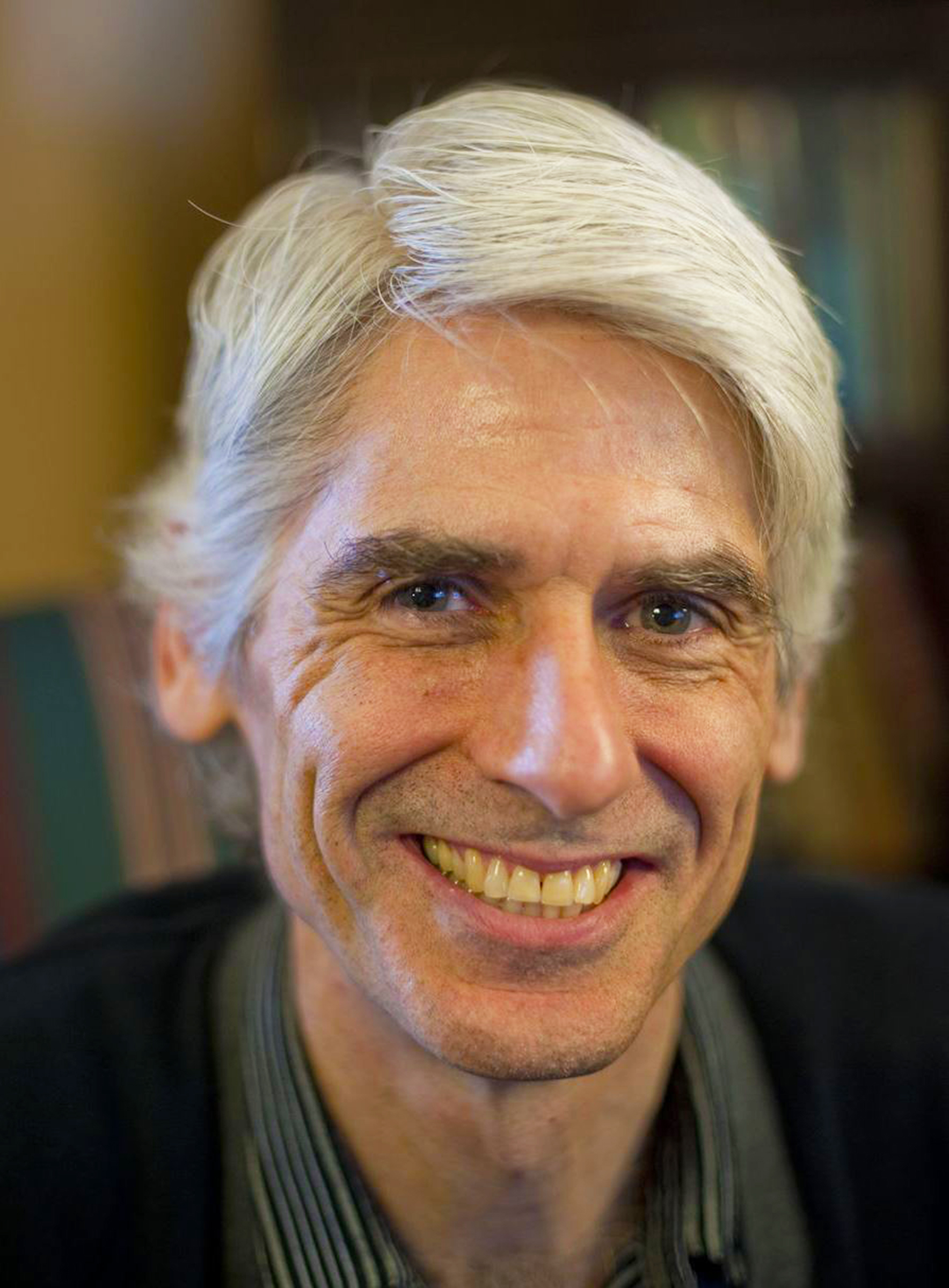 Meredith Counts recently had the opportunity to interview Detroit-reared and Pittsburgh-based fiction writer and poet Jim Daniels, whose newest book of short stories, Eight Mile High, was released in the summer of 2014 by Michigan State University press. What follows is a portion of the interview. For the full interview, check out the print edition of GLR Fall 2014, which will also feature Daniels’ story “Pearl Diving.”

The two stories from your new book Eight Mile High  that have been published in the Great Lakes Review — “Pearl Diving” (Fall 2014) and “Our Lady of No Mercy” (Summer 2014) — take place in a mostly Polish Catholic neighborhood of assembly line workers in Warren, Michigan. It’s such a specific place with its own landmarks and rules and characters. I wouldn’t assume it’s directly from your memory, but it reads as very real. Could you talk about the importance of place in your writing, in this collection in particular?

Place has always been important to me in my writing, and it’s often been wrapped up in social class—both a physical place and an economic place, and how those two things are linked. I’ve always had a little chip on my shoulder about the people I know the best and care about the most not showing up enough in our literature. I want to say, these lives are important and deserve our attention. In a lot of my earlier writing, I tended to blur things, referring to Detroit as a more general term for the metropolitan area rather than go into distinguishing the city from its surrounding communities.

For Eight Mile High I decided to zoom in even more on Warren, and even more particularly on the area next to Eight Mile Road, the border with Detroit, where I grew up. Anyone from Detroit knows Warren is not Detroit, and I wanted to focus on the distinctions, this white working-class community next to Detroit. I want this book to be like a magnifying glass or a camera with a zoom lens—to intensify the experience by limiting it geographically. This area in particular tends to look generic, the streets anonymous, but what makes them distinct is the people—the lives lived on those streets.

While the work is definitely fiction, I did want to capture the spirit and feel of the real place.

You grew up in Michigan and you’ve been living and teaching in Pittsburgh since 1982 but your fictional eye is still in your hometown; you are still sending characters in your stories on trips up north and following their lives in neighborhoods designed around auto assembly plants. Are you a Michigan writer no matter where you go?

Michigan has its hooks in me. It’s always pulling me back. I can’t say for sure why, but while I have written about other places—including Pittsburgh—Michigan is definitely still home for me. I am close enough (5 hour drive, though on the Ohio Turnpike, it seems longer….) to get back frequently to visit family in Michigan. I’ve got the emotional and physical distance to give me some perspective on the place, but still very attached to it too. Many of my initiatory experiences took place there, and I inevitably return there in my work.

My wife kids me about my Michigan pride—Michiganders have a state pride that Pennsylvanians simply do not have, with Pittsburgh and Philadelphia on opposite ends, and, as I believe James Carville said, “Alabama in the middle.” I think exploring that territory in multiple genres—poetry, fiction, film—has hopefully allowed me to keep making it new without repeating myself too much.

Tell us some of your favorite writers from the Great Lakes region?

Jim Harrison might be my favorite because I came across his poetry (he’s a great fiction writer, but I really love his poems) early on when I was in college and first beginning to read contemporary poetry.  Phil Levine, of course, though I came to him later. I should stop there, otherwise I’d be going on and on….

Besides my teachers, the first living poets I met were Conrad Hilberry and Herb Scott, two Michigan writers who I learned a lot from—they made the whole thing real. Hey, these ordinary guys publish poems! And they weren’t crazy or assholes—and most importantly, they weren’t dead.

One of the stories in Eight Mile High that leaves the neighborhood is “Raccoon Heaven.” It’s about a sort-of-reformed drug dealer and his disastrous attempt at a healthy marriage and a normal vacation cottage. His story gets worse and worse and it’s sensory, like he’s remembering this time in full, with his whole body. The rotten fish alone… It would be a terrible story to read while hungover.

Do you feel that way as a writer? I sometimes do. What’s so important about writing the ugly stuff?

Yeah, I guess I do. I tend to have a dark sense of humor, so sometimes I’m surprised when some readers find the work depressing and I think it’s kind of funny in some twisted way.

But I do think we have to go there—where the ugly stuff is—if I find myself hesitant to write about something—scared, even—I take that as a good sign. You want to say, oh, that hole’s deep enough, but you have to keep on digging if you want to be honest with your readers, and with yourself.

I’ve got to go with my man, Celine, here—I used this as an epigraph for my second book, Punching Out:

“The greatest defeat in anything is to forget, and above all to forget what has smashed you, and to let yourself be smashed without ever realizing how thoroughly devilish men can be. When our time is up, we mustn’t bear malice, but neither must we forget: we must tell the whole thing, without altering one word—everything that we have seen of man’s viciousness, and then it will be over and time to go. That is enough of a job for a whole lifetime.”

In trying to give a quick synopsis of the “Raccoon Heaven” I didn’t manage to convey any of that dark humor, but it is there for sure. This plague of algae and the illegal fish that eat it, the former homeowner with her yappy dog, the sinister neighbor children with their George-and-Lennie-vibe – it’s funny-grotesque, weirder and weirder stuff piling up.

Have you read this one out to groups yet? It’s the kind of story that if you read it out loud to the right crowd they’d be roaring…

I have yet to read that story aloud. I’ll have to try it and see if the tone comes through.

You write fiction about big issues – death and grief, sexual abuse, domestic violence, shame and addiction. Yet the stories in the end are about the people, not the abstract issues, because there’s also hand-holding and cigarettes and porn and pancakes and unlikely alliances. It’s like story tax, if you kill a character, you have to give the reader something else to keep them reading, to keep us from getting up from that table? Like if there’s a death, you have to give us some pancakes. Is it all intuition? How do you balance the ugly with the sometimes sweet and often mundane?

Story tax—what a great way to put it. I guess looking at the list of subjects, it is a pretty dark book, though I think there’s more humor in this one too. I do hope it is about the people, in the end. With all of our flaws, we still love each other.

For me, maybe it is all intuition, though maybe I do try and add humor as a survival tool. I don’t think I consciously try to balance things—in life, obviously, we can’t. Things are always tilting one way or another. We’re just trying to keep our balance, which I believe is a form of dancing, in order to stay alive. Even though we know that too is going to ultimately result in failure, death. So, eat the damn pancakes, right?

Coney dogs—not even close. I’ve been taken to the best cheese steak places in Philly, and all I can do is shrug. What’s the big deal? Now, coney dogs, that’s a whole different story. They’re the perfect food to come from Detroit—they have the personality of Detroit. Nothing subtle about them. When I had a Detroit News paper route, every Friday after I collected from my customers, I would go to this coney place on Ryan Road and get two coney dogs and a root beer and sit at the counter with my piles of change and eat like a king. In winter, taking a coney dog in my frozen fingers and taking that first bite—pure heaven.