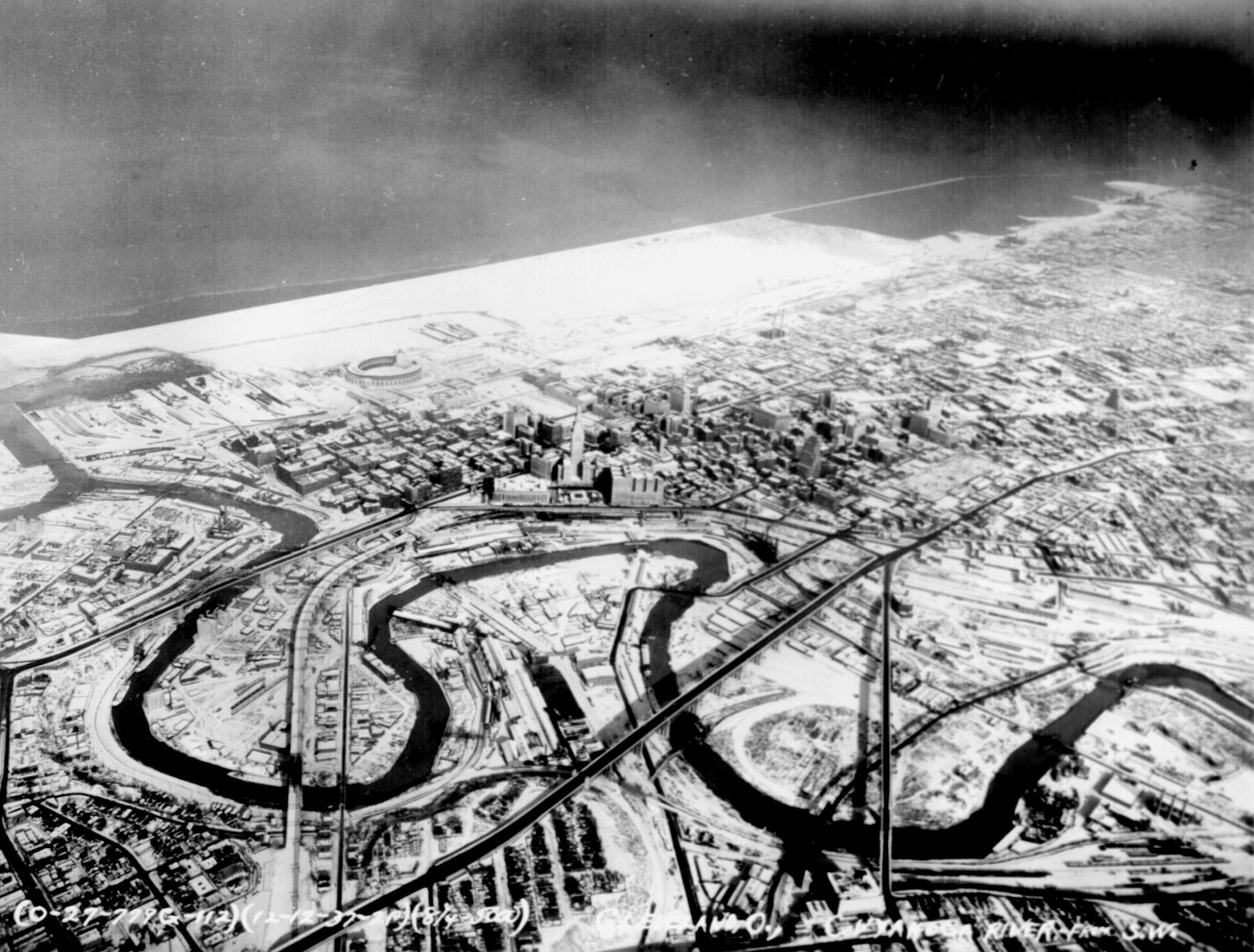 The river here is brown. Brown and murky, and from a distance, barely moving. But if you look closer, you can see it swirling, like smoke, and you know that something is going on down there. Sometimes people jump into it (usually they are drunk), only to find they can’t get out. There are two eight-feet walls flanking the river, attached to the pilings; the walls are made of steel forged right here in Cleveland, Ohio.

Presently, the Cuyahoga River flows from South to North, emptying into Lake Erie, although that wasn’t always the case. About 10,000 years ago, a glacial retreat entirely reversed the river’s direction; the receding ice sheet also left behind debris and scars, which further disrupted the river’s course, resulting in a serpentine, somewhat shallow body of water that traverses 100-plus miles in switchbacks and oxbows to cover a mere 30 miles of longitudinal distance.

Over time this crooked river carved out a flood plain or valley near the mouth of the Great Lake. This flood plain, known as “The Flats,” was the site of an unprecedented economic boom in the late 1800s. Entrepreneurs like Rockefeller, Morgan and Carnegie seized upon a rare convergence of major railroads and shipping lanes to maximize distribution of their products. Industries like iron, steel, asphalt, petroleum, salt and paint began to take root; indeed they began to soar. By 1920 Cleveland earned its place as the fifth largest city in the United States.

To facilitate increased traffic, engineers designed and built 26 movable bridges to span the river, providing safe transport for automobiles and trains above, as well as river barges below. Architects will tell you this area is no small mecca for studying single and double-leafed bascules (draw bridges), swing bridges (center and pier pivot) and vertical lift bridges (trestles counter-weighted like an elevator).

In fact, many photographs of Cleveland feature these bridges prominently in the foreground—while the city’s western-facing, downtown skyline looms in the distance. At night the buildings announce their shapes in radiant yellows and oranges; daytime reveals a different story. Those same buildings appear gray and beige and brown, darkened in the creases by decades of soot and smog, betrayed by the very industries that made them possible.

Cleveland’s economy peaked in the decade following World War II. By 1950 the population reached an all-time high at 914,808. Business was positively booming in the Flats. Unfortunately, business was booming elsewhere too.

The 1960s brought with it vast infrastructure improvements, innovations in distribution (airplanes and semi-trucks), advancements in technology (automation) and perhaps most damaging, competition from overseas. The gradual loss of manufacturing would devastate this city and its people.

In June of 1969 the end arrived—in the form of a bizarre river fire. An errant spark (possibly from an overhead train) ignited a floating mass of oil, debris and sewage. The Cuyahoga River fire was not the first, but ensuing media coverage ensured it would be the last. Time magazine featured the story on its cover, describing the Cuyahoga as “a river that oozes rather than flows.”  The U.S. government responded in turn by establishing The Clean Water Act and the EPA.

The following years saw dramatic improvement in water quality. The riverfront once again became a viable investment opportunity—but this time for a different purpose. Investors purchased and renovated vacant factories and warehouses, transforming an industrial blight into a vibrant entertainment district. Bars and restaurants and boardwalks sprang to life on either side of the river; boats cruised the nightlife scene, docking at legendary hotspots like Shooters, D’Poos, Fagan’s and Rumrunners; blaring music and shrieks of laughter echoed across the boating channel; colorful neon lights and flashing strobes shimmered and danced across the water’s surface.

For nearly two decades, The Flats reigned as the premier tourist destination in Ohio (rivaled only by Cedar Point), boasting the highest concentration of bars in the Midwest and a steady influx of 100,000 visitors on any given weekend. But by the year 2000, everything had changed again. What happened was and still is a subject for debate. Some say it was the buildings themselves, shut down due to fire and health code violations; some say it was an increasing (and unsettling) number of drownings in the river; some say it was violence, rumors of stabbings and/or gang activity and some say the nightlife simply migrated elsewhere, to newer bars and restaurants in the Warehouse district (and later to East 4th Street). The only thing we know for sure: the Flats was dead once more.

And yet there is hope. The Cuyahoga River remains the place where we bring visitors, people who want to know the real story of Cleveland. We tell these people about The Flats, about the industries and the bridges, about the endless stories that began here. We, the remaining 390,000, point to new construction on the East Bank, hotels and restaurants and apartment buildings, new investments, new interest, new hope. We say things like “The Flats will be back.” As proof, we need only mention the unusual history of the Cuyahoga River, a murky river that once flowed south, a river that meanders 100 miles back and forth, to cover a mere 30 miles of distance, a river that, at least on paper, makes no sense at all.

Pat Pujolas is the author of Jimmy Lagowski Saves the World (Independent Talent Group, 2012), as well as many other published works of fiction and non-fiction. He was born in Cleveland, Ohio.