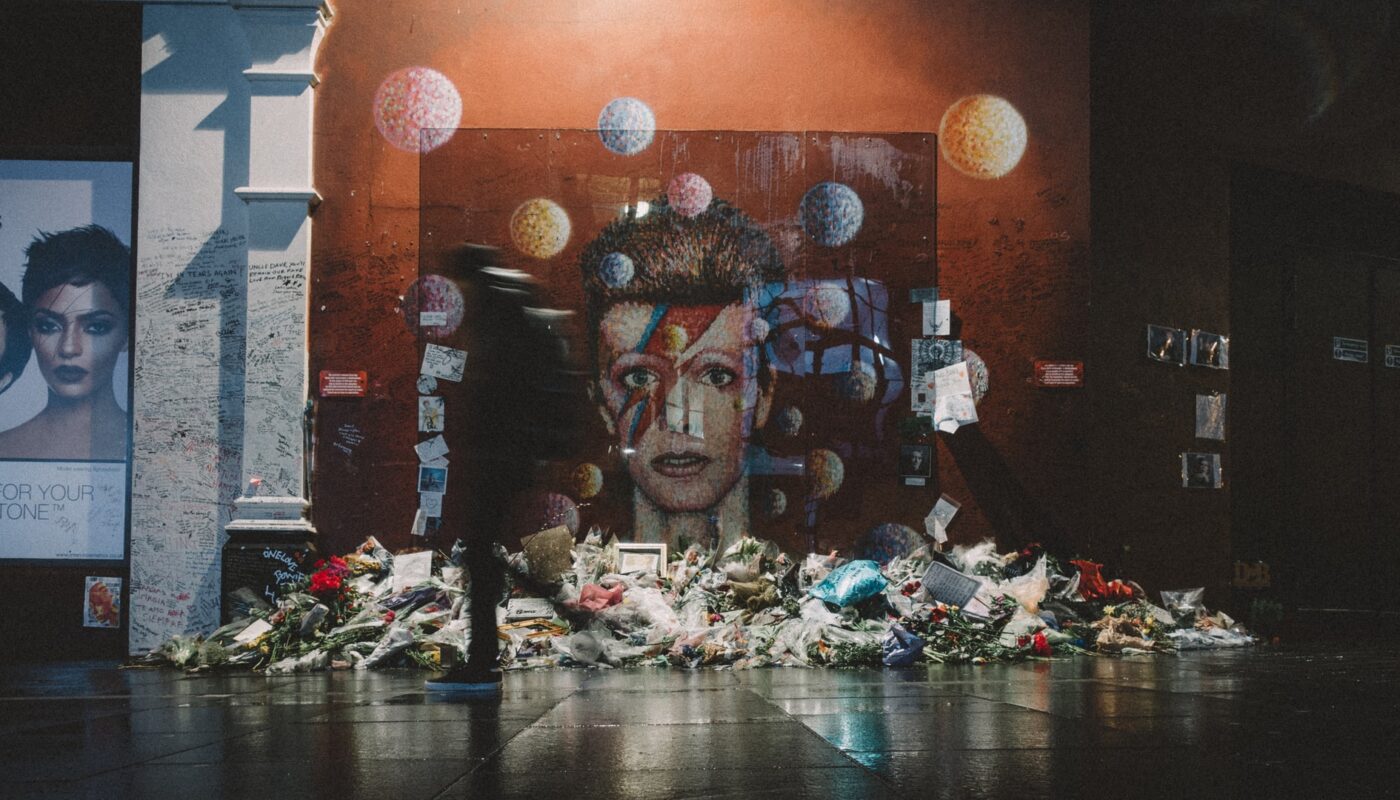 When I checked my phone the morning of January 11, 2016, I had a message from a former student of mine who worked the night shift at the Hard Rock Casino in town. It said: I know how much you love David Bowie and I don’t know if you’ve had a chance to hear yet, but he passed away yesterday. Sorry if you’re hearing it from me first.

She knew about my love for his music, the movie Labyrinth, but she also knew that my daughter, Bean, had inherited my obsession. Her sister, Sophia, used to watch Labyrinth semi-weekly as a toddler, too. When Bean was a toddler, she, her sister, and I would spend summer vacation watching Labyrinth almost daily; we’d flip through videos on YouTube, dancing and singing. In December of 2015, Bean even asked for a giant stuffed Chewbacca and a giant stuffed David Bowie. Bowie had that much status in our house. My wife and I joked that it was because he was the patron saint of weirdos and our house was full of them.

One day, a year or so before this, driving through our neighborhood after picking them up from school, Bean asked if we could go to a David Bowie concert sometime. I knew he had retired from touring, but if the Stones could still tour well into their seventies, why not? I loved the idea of taking my kids to see him live.

That January morning, I had no idea how to tell Bean or her sister. Before I left for work, I told my wife the news and asked her what we should do. She didn’t know either, so I asked her to wait, and I’d break the news over ice cream after school.

That’s how the day unfolded. I told them in the car in the school parking lot, drove to get ice cream, took it home, and we sat at the end of my bed and watched Bowie videos. Bean didn’t cry. Sophia did. I did a little, too.

January is always the strangest month for me. I’m an educator, so it comes with its own gateways and endings, one semester shifting to the other in lotus-eating fog. But existentially, it’s always been a time of contemplation. A year later—January 13, 2017—marked the twentieth year since my father passed away of cancer.

My dad left my mom, my sister, and brother a week before I turned seven—my brother’s fourteenth birthday. My father moved a few towns over. We rarely saw him, even though it was a thirty-minute-drive to his house on Michigan back roads through forests and fields of corn and soybeans. The forest we drove through to get there is known as Purgatory—an apt name for what my brother, sister, and I experienced, awash in our mother’s dogma, burning off the sins of our father. Waiting.

Years later, before I left Michigan for my first teaching job, my brother and I took a drive through Purgatory to our father’s gravesite under a patch of shady, elder pin oak trees in a patch between corn and soybean crops. We threw out the idea of urinating on his grave; we settled on ridiculing his headstone for having an etching of a man in a fishing boat (where he abused my brother for inexperience and frustration on those many days the fish just weren’t biting) and for claiming to have been a Vietnam vet. In reality, our uncle took mortar fire in Vietnam, so when our dad enlisted, he spent the war in Gibraltar and Kodiak Island, Alaska.

My dad died when I was eighteen and, other than stories I was told by others, he was entirely a stranger to me. My relationship with him was academic. In fact, when he died, my reaction to seeing him in his casket was akin to looking at the preserved cadavers of popes in Saint Peter’s Basilica. He was an object, and I observed without emotion, affected only by the fact that he’d lost so much weight to his cancer he looked like my brother. Never mind that people always said I look like my brother.

Twenty years later, I realized losing David Bowie was a more emotional, more traumatic experience than losing my own father. However, it had more to do with my own fatherhood, my own relationship to my children. For the first time, it allowed me to contextualize those old emotions because at eighteen I neither had the guidance nor the emotional vocabulary for the experience.

Finally, after twenty years, I was able to reexamine my own view of my father, perhaps even reconcile my memory of him. My memories start very early—as far back as one year old, my sister walking with me alongside a country road—so, I remember my father from my toddling days until the last time I saw him a couple years before he died. Wafting through the wind-like puffs of smoke from his cigarettes are memories, visions of daffodils lining our driveway at the house we shared. I see him driving his F150 down the driveway to the dirt road we lived on. When he got home from the GM plant where he worked as an electrician, he’d sit on the floor of the living room with his back against the couch, drink a green glass bottle of Mountain Dew, and watch television. I remember asking him about what he was doing, what he was watching. And day after day, that was the extent of our conversation.

My earliest years were filled with a non-relationship that intensified when he left my mom for a bar fly who lived in a trailer on a lake. Our relationship crystalized into years of intense, willful ignoring on both our parts.

I remembered how in the first year of my teaching career, I woke up wide-eyed from a dream. This was in my apartment in Nashville, where I had just moved. It was a dream that had played out over many restless nights in my youth. In this iteration of the dream, I was at an intersection in the town where he worked, and I saw him sitting in his truck on the opposite side of the road—at the intersection of Constantine and Broadway. To my dream-self, it was confirmation he had faked his death. Yet in this new scenario, I chased him down. I found him in the parking lot of my favorite grocery store in town (it had comic books on a wiry rotating rack). My father denied his identity over and over. Time passed in its wispy, dreamlike progression until finally he confessed—as if being him was, in fact, a crime. In that very moment, we were transported to my apartment in Nashville. In the middle of my bedroom floor was a manhole cover between stacks and stacks of books because I had almost no furniture, conscious or dreaming. My dad told me he had to go back to that Underworld below the manhole lid—and he wouldn’t be getting out anymore.

I awoke long enough before dawn that I heard opossums rustling on my patio.

Twenty years on, I realized I knew more stories of ancient dead men than about my own father. I also acknowledge this is typical between parents and children. Now, within the context of my own fatherhood, I have perspective of this phenomenon, this estrangement between generations like an heirloom.

Just months before January 2017, I showed Bean—aged seven—a picture of my dad. She thought it was me. And I thought of my brother in my father’s casket. Now it was me. However, this wasn’t a morbid realization, because my relationship with my kids was and is its own entity. I am there for them. I am no stranger to them. And if they should ever feel that way—listen to some Bowie to bridge our generations.

My mom shares her birth month—January—with Bowie, though I know she never cared much for him or his music or fashion or iconoclastic nature. In fact, other than his codpiece in Labyrinth, she never said anything about him. And that’s fine, because she has always tacitly acknowledged I was an outsider and through David Bowie’s music, I was able to find my way around my own alienation—that it was not merely an obstruction, but my peculiarity was a world I had to orientate to and explore. I want them to know that Bowie remains our patron saint of individuality, and for my kids, I think Bowie will be a key and compass for them too as they find themselves.

Photo by David Preston on Unsplash

Aaron Buchanan currently lives in the Tampa Bay area, though he is a West Michigan native—a land he considers mystical, incongruous, and features prominently in his work. He teaches Latin and philosophy to pay the bills. He also collects photos of restroom graffiti and is a tenth-degree master of mix tapes. His writing was most recently featured in The Running Wild Anthology of Stories, The Phare Literary Magazine, and The Main Street Rag. Aaron has an MFA in Creative Writing from the University of Tampa. To keep up with Aaron, follow him on Facebook.