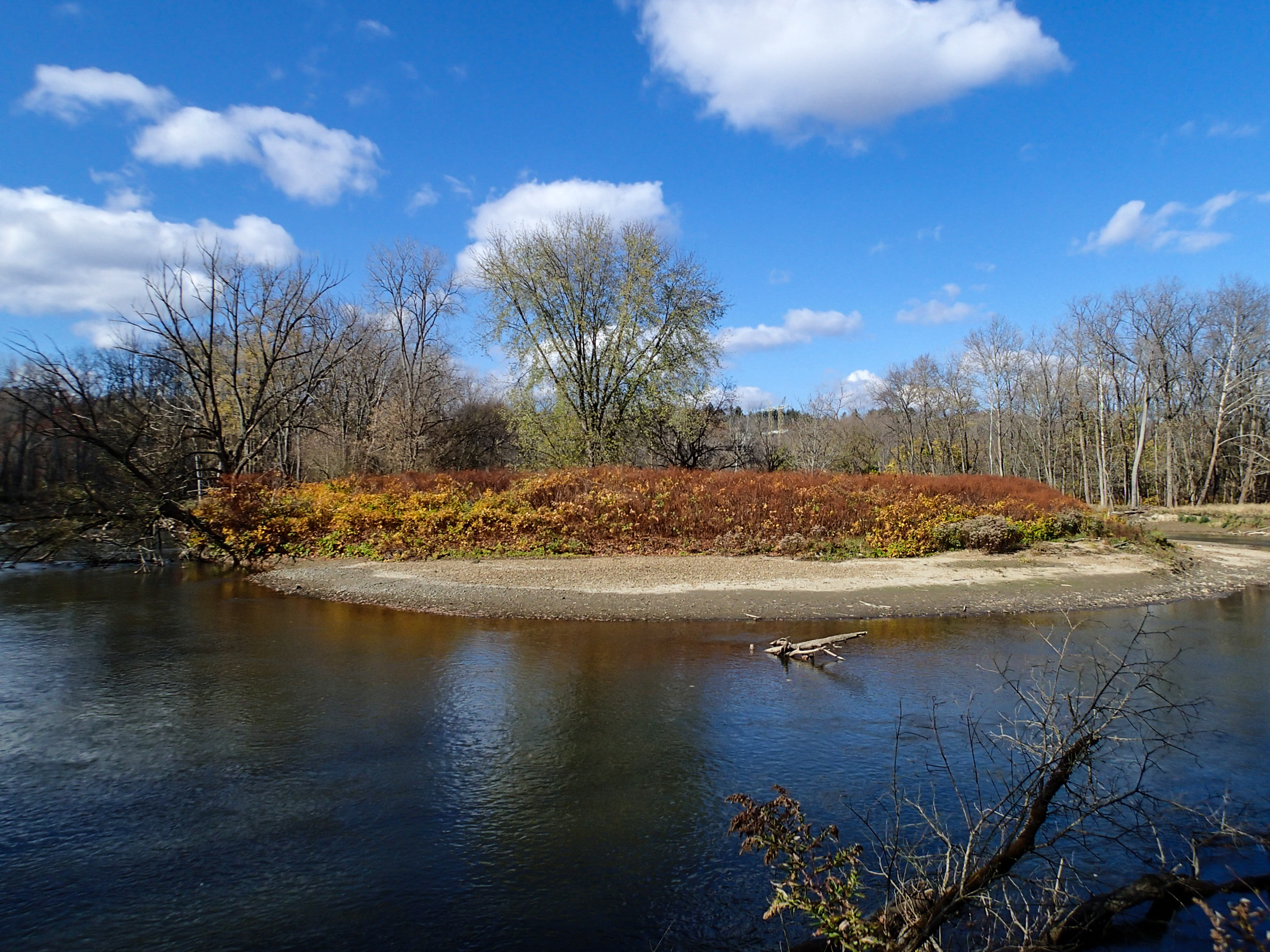 On the last warm day of October, I sit on a muddy cutbank, feet hanging over a horseshoe bend in the Cuyahoga.

There is an island in the river, smothered in a thicket of Japanese Knotweed. The woody stems stick up like wiry red hair. Nothing eats it. It spreads like cancer.  Cut it down, and two bushes grow back. Dig it up, and the slivers will root downstream.

The limbs of dying ash trees reach up out of the floodplain, raking the blue sky. Girdled by Emerald Ash Borer, crown cut off from the roots, the ash trees will all be gone soon.

The plump creamy grubs of these Asian wood-boring beetles have fueled a population explosion of woodpeckers across the Upper Midwest. A brief flourish of birdsong in the woods marks the loss of forest diversity.

I have complex feelings about this place. Part of me wants to try to fix these things, to tear up invasive plants by the roots, to inject each ash tree with insecticides. I think I can stop the world from slipping through my fingers.

Some other influence urges me to accept things as they are.

All around me, tall weeds with dried husks rustle in the breeze.  Gone to seed — the phrase connotes shabbiness, an unkempt quality –but in these plants, withered but still supporting their progeny, it is completion, success.

“Every generation has to die in order that the next generation can come,” said Joseph Campbell in The Power of Myth. “As soon as you beget or give birth to a child, you are the dead one.”

My middle son sleeps in a stroller I’ve pushed to the edge of the river, wind playing on his closely cropped hair. Shadows flicker across his innocent face in the breeze. The price for his life is paid in sleep, cognition, concentration, the ability to do a single thing for more than ten minutes uninterrupted.

I stop here often to look at this moving water. It reminds me of Oregon, the place my wife and I lived before having children.

Every October, I would wade in a river where the tides licked the roots of an ancient rainforest, wait for salmon to swim up from the beach, to climb into the hills to the clear water where they were born. Females swept shallow gravel beds to lay their eggs. The males turned dark, grew fangs and fought like dogs. As soon as the salmon entered their natal rivers, they started dying.

Now I’ve returned as well, born in Akron where the Cuyahoga makes its U-turn and runs toward Lake Erie. I have come home to raise my sons downstream from the old Jaite Paper Mill, where the pickle liquor flowed, and the river ran foul.

Forty years ago, the National Park Service adopted this valley. The water looks clean and the landscape has grown over most of the scars from the river’s industrial past, 33,000 acres carved out of the mass of unbroken suburbs from Cleveland to Akron. There could be more forest, more fish, and more deer thriving in the Cuyahoga Watershed today than in any other time in the last half-century.

And yet, Aldo Leopold writes in The Sand County Almanac, “The autumn landscape in the north woods is the land, plus a red maple, plus a ruffed grouse. In terms of conventional physics, the grouse represents only a millionth of either the mass or the energy of an acre. Yet subtract the grouse and the whole thing is dead.”

The grouse is unmade, wild. The deer feel like cattle, thriving in the environments we have created. We have this godlike ability to shape the landscape, but no way to breathe wildness back into the wilderness we resurrect.

The boy who took apart his father’s watch can’t find all the pieces to put it back together.

When I lived in Oregon, the act of fishing became a ritual, heavy with meaning and spiritual resonance. As if in some cosmic joke, Steelhead that evolved in the Pacific Ocean swim past my backyard in the Cleveland suburbs, up the Cuyahoga River each winter. Throughout the Great Lakes, wildlife agencies stock Pacific Salmonids in tributaries where they do not belong. In some areas of the Upper-Midwest with cleaner, colder water, the fish have naturalized. No feral breeding populations occur in Ohio, and none are planted in the Cuyahoga. But their tendency to wander compels Lake Erie-run rainbow trout to swim to Akron.

I do not find any connection to my version of God chasing lost Steelhead around the Midwest.  Instead, I spend my days looking for glimpses of wilder animals, trying to create a relationship with this place. I’m searching for a story to tell my sons about what lives in these woods.

There will be times in the coming months when the sky will look like wet newspaper, and the deadened landscape like strips of corrugated cardboard, cinders sticking to every frozen thing. I’ll look through the leafless trees and see a line of cars passing on the road and I’ll think that it is too much effort, too much self-delusion to focus on the fragments of living wild beauty here.

Today the warm wind could buoy me up, and I could soar on an updraft and see the whole valley like a Red-tailed Hawk.

But who would watch my son when he woke on the riverbank? Who would keep him from being swept into the current?

My son wakes as I push his stroller back onto the trail.  I point to a Red-bellied Woodpecker scolding us overhead, and start to tell him a story about this red and white bird circling the dead ash trunk.