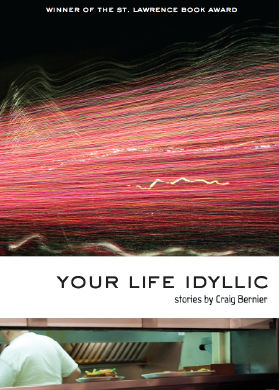 The following is a character sketch from the short story “An Affliction of Starlings” from Bernier’s forthcoming collection “Your Life Idyllic,” which won the St. Lawrence Book Award, available April 2014.

My parents were both Quebecois, but stopped speaking French after moving from Quebec City to Buffalo. My father, a welder, eventually followed the trade to the auto industry in Detroit. That was the extent of his travels. He came from a line of trappers but had failed to master the wilderness. Factories saved him from starvation. My mother’s people were transient folk: stevedores, mercenaries, and rail engineers. Bougainvilles were strewn in every sea, buried on all continents.

My parents were naturalized American citizens by the time I was growing up, but they frowned on the idea of cultural identity. Good guests assimilated, at least that’s what my father thought. Aside from their clunky accents and occasional slips for covert speech, French was dead in my parents. Or at least for the most part.

On rare occasions, my father would drink sherry. He’d nip from the glass while sitting at the kitchen table. He’d watch me watching television while he sorted through pocket change, then he would send me off to bed at some point. I’d head to the second floor and he’d clomp down the wooden stairs into our unfinished basement. Later, my father’s music, records from the basement, would wake me. Louder and louder, songs in his native tongue would travel through the ductwork and returns of our old brick home, carried on the currents of the furnace cycling on and off. He would sing along, his voice shabby and out-of-tune.

That sad singing bear howling from his cavern was a mystery to me. That was not the quiet fellow who sorted through pocket change separating silver coins into coffee cans for the basement and alloys back into circulation. That was not the man always shutting off the television, the radio, the record player, or any burning light.

I would head to the basement in the morning to find that bear, but Dad worked first shift and never missed a day. Only the albums remained, their maudlin covers depicting men of the wild, sullen folk clad in flannel, scarves, wool caps, and always at least one raccoon hat. They drank from flasks and enameled coffee pots teepeed over a fire. They played wooden pipes, makeshift drums, banjos strung with lament it seemed.

It was harder to catch my mother speaking French because it came without the fanfare. When she did it, it was in calls to her family: her brother, an open ocean fisherman in British Columbia or up to Quebec for her mother who kept late hours as a radio operator on the St. Lawrence for the Canadian government. I knew when my mother was speaking because it came with the smell of breads and pastries, as she’d always bake during these evolutions. I’d wake to sweets in the air, cinnamon or jams, then murmurs from the kitchen downstairs. I’d creep from my room to the stairway’s edge careful not to incite wooden groans. Her chain-smoking would overpower the finer aromas, but from my mother, French was enamoring. Beautiful, husks of liaison fell from her alongside her speedy riffs of fluency. To me it was like listening to the dizzying run of notes from my dad’s jazz records.

When I think of her now, it is never as the bag of bones fighting cancer until the end, but instead speaking in French while baking; using two ashtrays for one cigarette—one on the table and one by the oven; jockeying back and forth between checking the oven and sitting to listen; sipping red wine from a Mason jar while twirling the long phone cord like a jump rope with her free hand. The meager luminescence of the oven’s overhead sepia bulb bathes her progress into the wee hours while the exhaust fan drones a blanket covering the entire home.

Outside these instances, little French was spoken in my childhood home. I acquired a deep shame years after they were both dead when I realized I’d never asked either of them to teach me, never expressed interest or concern. Not once.

Craig Bernier has worked a range of occupations from technical writer to bartender, carpenter to dish washer, cryptologist to kennel cleaner. Most recently he was employed by Duquesne University as an Instructor of Writing. His stories have been published in The Roanoke Review, Western Humanities Review, Dogwood, Gigantic Sequins, and in a story anthology from Akashic Books titled Detroit Noir. His nonfiction has appeared in the journal Creative Nonfiction. Originally from southeastern Michigan, home is currently a stone’s throw from Pittsburgh, in Wilkinsburg, Pennsylvania. He is at work on a novel and a collection of essays on motorcycling. Find him online.