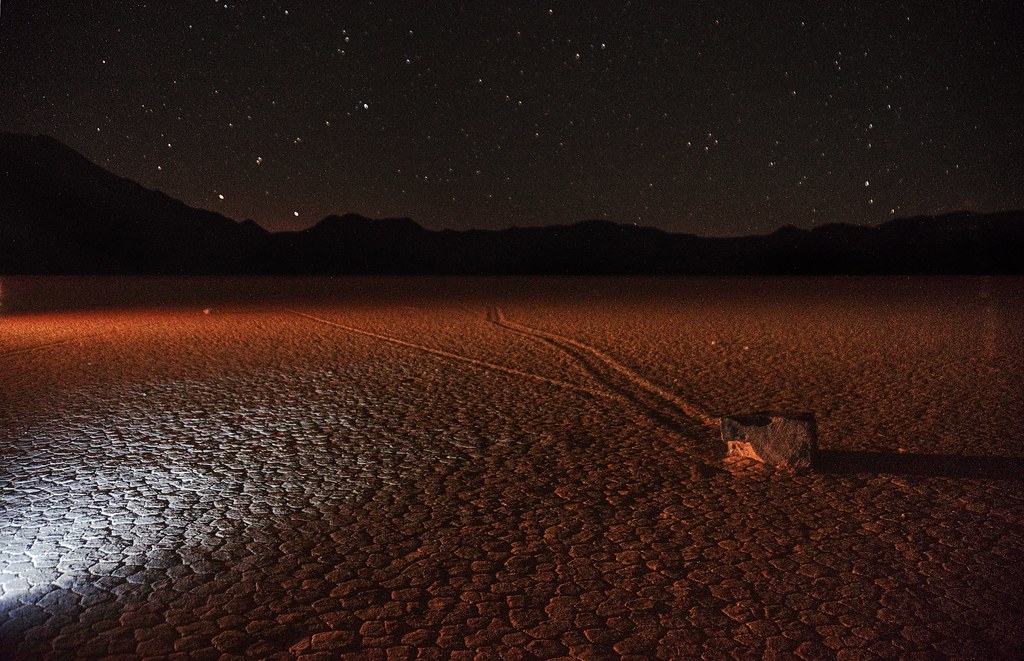 “Just stop and ask for directions,” my wife says. She knows I can’t do this—won’t do this. There isn’t even anywhere for me to stop and ask. We haven’t passed anything for hours. She leans her head against the cold window and her breath spreads fog over it.

“We can’t keep driving on and on,” she says. “We are lost. We are only going to get more lost.”

“I know where I’m going.” And I do, mostly. I am going north, or northwest; however, I think I should be heading southeast, because I probably passed the turnoff I was supposed to take, when the setting sun made reading signs impossible.

“You said that half an hour ago,” she says. And I had. But what if I hadn’t missed that sign yet? I can see it in my mind’s eye because I’ve been making this trip, in some form or another, for twenty-five years.

When you see things in your mind’s eye you see versions of them, not the real things themselves. I can see the sign and the plastic trim around the windows of my dad’s old station wagon; I assume the trees along the side of the road were the same as well, because why wouldn’t they be? But I can’t remember if they were luscious and green or if they were sickly, deciduous. No doubt I’ve seen them in both instances, and in many other variations throughout the years, and so now they’re all blurred together in some murky semblance of memory. I should probably watch the road.

My dad would not have stopped for directions—though he would not have ever needed them. He had what my wife calls “that uniquely Midwestern quality to always know where you are.” It appears that I have not inherited this quality. There is something innately charming about being a sturdy Midwesterner—or so my wife says. I wouldn’t want to dispel her of the notion that she married a good old boy from the Midwest. I like to think of myself as the “salt of the earth,” as a “man’s man.” In reality, I hadn’t lived anywhere near the Midwest for fifteen years before my parents talked me back into it. God rest their good old souls.

I met my wife in New York, and she was the type of woman I thought I would meet in a place like New York. She wore nice clothes and enunciated every word with the clarity unique to those who are, as she would put it, “well-bred.” I love my wife very much, so I never wanted to break the illusion that I was the prototypical Midwesterner. Truthfully, I am very much a product of the cities; I went to school out east (that’s what I was doing when I met her, as a matter of fact), and I considered myself something of an artist…well, at least I did once. These days, being fond of the arts breaks apart that image of the strong silent type.

“God I wish you weren’t so stubborn,” she says. I know she doesn’t mean this. She considers stubbornness part of the middle-American mystique. That’s always done something for her. She used to whisper in my ear that she liked how rugged I felt, how rough my hands were, how I kept to myself and wasn’t a weakling. She complained about the whiny brats she grew up with in the city. In truth, I hadn’t worked a day in my life when I met her. I don’t, to this day, know what she meant about rough hands or me feeling rugged. I can’t even grow a beard. I owned, at the time, all of one flannel shirt, and it wasn’t the warm type a working Midwestern man would need.

When I watch her staring out the window at the endless procession of anonymous trees, I imagine that she must be having an affair. There is no way this woman is still happy with me, because no one who isn’t from here wants to live here, not really anyway. To tell you the truth, those of us who are from here don’t want to live here. But there’s nothing we can do; we will always be drawn back here, and we will always think we are right to return after years spent doing something, anything, else.

She doesn’t complain about the directions anymore. At this point, I know I have driven too far, but to turn around now is to admit defeat. I hope she’s having an affair with someone interesting, because she deserves to be reminded of interesting things. I remember thinking everything back in New York was interesting. That coffee shop? So interesting. That old church on Amsterdam? So interesting. Those NYU girls falling into cabs with complete strangers? So interesting. For me these things were interesting, they were something novel; all my life I’d seen only these trees and these empty roads. I had tasted only the salted beef stock my mother used for practically all meals. I had never seen strangers, for strangers so easily become neighbors where I come from. For some people, that is a positive, but for me, that creates so many closed loops—how can you know anyone if you’ve never had to meet anyone?

The rumble strips on the side of the road groan and I jerk the car back into the lane, causing my wife’s head to jolt against the window.

“Ow! What the hell?” She looks at me with scorn. I expect, at any minute, for her to ask, no, demand, that I pull over at once and let her out. I don’t think I even need to say how preposterous that is; we are, as she would say, out in the middle of nowhere.

She doesn’t have to demand anything. As if on schedule, the car begins to lose power. It is out of gas.

“You have to be shitting me,” she says. I pull the car over to the side of the road, the two beams of light pointing out into the vast blackness ahead.

When we get out of the car, a chorus of crickets soundtrack the evening. It’s peaceful; this is what nights are like, and there is some solace in them. But I can still feel and hear the percussive racket of Manhattan. Once you learn how to sleep amid such noise, you can’t ever unlearn it. I don’t sleep much anymore; even with the crickets, things are too quiet here. I always feel like I’m waiting for something to happen. I’ve come to accept this, though, because accepting undesirable qualities is what a man like me does, according to my wife. I’m supposed to be “proud of my humble independence” and “stoically acceptant of my ‘lot in life.’” I have no idea what she means by any of that.

“How did you let this happen?” she barks. “What the hell are we even going to do? We are out in the middle of nowhere.”

I look southward and then northward. In both directions there is only a terminus of perfect dark.

“We just wait in the car for someone to come along.”

“What if no one comes along?”

“Someone will always come along.” But even I don’t believe this. True, this is a road, and all roads must be traveled to have any purpose, but what guarantee is there? While I may have panicked about this, and, if I’m honest, I want to panic about this, I have to convey a sense of machismo, for that is what she expects me to do. Not the braggart type of machismo that angry men feel, but that “quiet, determined self-assuredness.” That’s what she called it.

I pull some reflectors out of the trunk and put a few on each side of the car. I give her my jacket. People from back east get cold much easier than Midwesterners—at least that’s what she believes. In truth, my hands are practically frozen stiff, and my teeth are clenched so tightly (to avoid clattering) that my jaw hurts.

She is cursing me under her breath. I know she’s having an affair. I try and picture the guy but nothing comes to mind. I figure it must be someone she sees when she visits her parents back in the city. I don’t go with her anymore. It’s too hard for me. I don’t say this, not to her, because…well, you know why.

I ate at a Cajun restaurant the first time I went to Brooklyn. I went with a girl named Jasmine. It remains, to this day, the best food experience of my life. I can’t remember what the place was called anymore. I don’t think I ever knew what it was called, truthfully. But it always amazed me that, in one night, I experienced so many things that had, until that point, been alien to me. It was this newness I had waited my whole life to find. I’m convinced, even now, that I could still see so much there.

Here, life is like beige daubing on a brown canvas. My wife has said, often, that I must like the routine here, that feeling of “commonplace comfort.” I can’t argue with her—she says Midwesterners are known for not arguing.

I love my wife very much. I think she is having an affair with an interesting person back in New York. I know she wishes we still lived there, but she says she knows how much we Midwesterners love to stay in the Midwest. As usual, we are heading in different directions along the same path.

“Cobblestones on the racetrack playa” by PeterThoeny.

William Monette was born and raised outside of Detroit, Michigan. He holds an MFA from Columbia University. He currently lives in Washington, DC, with his dog. His work has previously appeared in Typishly, Flare: The Flagler Review, and SHARK REEF.