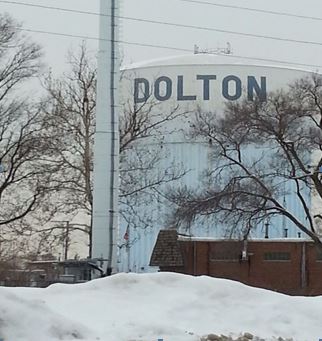 When you find yourself approaching the vicinity of a popular national retailer such as Walgreens, and a pair of bulbs are blown on its massive red cursive letters so that it only reads ‘ al green’, not in homage of the 70’s soul singing reverend, but just from an accumulation of mere chance, short funds and pernicious Midwest weather, then you know that you’ve arrived in my neighborhood.

Dolton, Illinois, immediately south of the hostile city limits of Chicago.  If Illinois was the land of Lincoln then Dolton was one of his beard naps.  Their slogan should be ‘Welcome to Dolton.  Not as many homicides as Chicago but our politician’s are just as cooked!’  Yes, home to small town heroes such as  former Philadelphia Eagles quarterback Donovan McNabb, acclaimed actress and comedian Jane Lynch, but more importantly, home to Spank. Now, nearly every small dilapidated town has their man of urban folklore. Ours was sir Spanky, a bony, musty native, whom legend has it, once survived a pit bull mauling by a prize winning middle weight dog fighting champion of the village. No one saw it but he reportedly, out of self defense, strangled the life out of the champ using nothing but his own ashy, bare mitts, and if you ask me, he wouldn’t have thrown three key interceptions against the Patriots in the Super Bowl despite the incident. What are you blind McNabb!

A town literally located in the Windy City’s overcast of a shadow.  What was once inhabited by working class white families evolved into an urban utopia of sorts.  Why, just a few decades ago, Dolton had been the site that hosted a slew of hate crimes, and though that dark chapter remains deeply buried inside the annals of the village, amongst the outskirts, you can still almost taste the racial history. Could use less salt.

I’d say the ethnic shift began around the mid-to-late Eighties. A cultural migration of biblical proportions. Property values plummeted, prosperous homeowners fled the area and a chain of ‘ Woo Woo’s Barbecue shack establishments sprung up across the landscape, polluting the neighborhood with fumes of charred pork fat that spread like locusts and specializing in a secret sauce recipe that would make Moses himself lick his fingers.

There were some elderly disgruntled remnants of the past population that stayed put, regardless that their once American dream had become overrun by minorities. They were the ones that hardly ever left the house and still referred to blacks as ‘ colored ‘. Having said that, it would be a disservice not to mention the trailer park Causation kids over East, whom having resided amongst the urban elements for such an extended duration were given honorable clearance with occasional usage of the N-word.

My hometown might have been the City of Broad Shoulders, and moving to Dolton as a child may not have been my ideal destination to grow up, but as I climb in age I can honestly say that I am proud to have been raised in the same neighborhood as the incomparable Spanky, whom if you ask me, would have won the Emmy for Outstanding actress in a comedy series in 2013. What are you blind, Lynch!

Marcus A. Millison is a writer from Chicago. He was a Fiction Writing major at Columbia College Chicago, has assisted playwrights at the Black Ensemble Theatre, and is registered with the WGA. The  father of two and resides in the South Suburbs of Chicago.