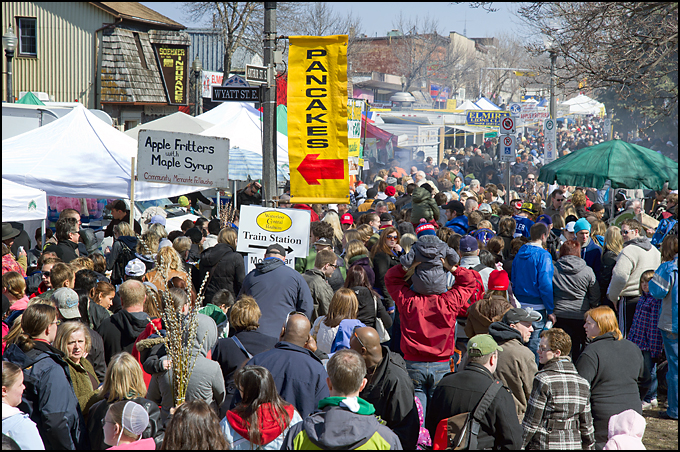 There is a Canadian quintessence to Elmira in that it boasts the world’s largest one day Maple Syrup festival. Arthur Street is bisected by a line of smoking tents that dish out pancakes, back bacon and grilled corn. Hayrides shuttle people to and from their cars. Others filter through the quaint streets on foot, passing by driveways where locals sell jam, pussy willow, or the contents of their refrigerators and attics.

Bands take the stage of the town’s green gazebo, inside a triangular park, where a marble soldier stands and honors townsfolk lost in both World Wars and Korea. There is also a fountain dedicated to teens killed in car accidents. When it’s all over, and volunteers are sweeping the streets, over sixty thousand people have visited Elmira, spiking their blood sugar and nourishing the sticky bonds of community in the name of boiled tree sap.

It would all have the atmosphere of pagan woodland revelry if the small town didn’t have more Christian churches than you can shake a hockey stick at: Mennonite, Pentecostal, Trinity, Presbyterian, Catholic, or The Dan Snyder Memorial Arena. The latter temple is where the Junior B hockey team, the Elmira Sugar Kings, nail opponents to the boards, and like countless towns across the country, children hardly able to walk, have razor sharp blades put on their feet, and with shaky legs, glide onto centre ice and learn the chicken dance: “Nana nana nun na na.”

Dan Snyder, by the way, was an NHL centre of great promise. He died an Atlanta Thrasher in 2003: a passenger in the Ferrari that teammate Dan Heatly crashed. For Snyder’s funeral, NHL hegemony descended on Elmira. When Snyder’s family made the short walk from their house to the church (the one without ice) hundreds of boys and girls in hockey jerseys lined the street and clacked their sticks against the pavement. This is the game’s percussive song of sportsmanship, commonly heard when an injured player is taken off the rink, or in this case, into the hands of the Lord, The Keeper.

Elmira is settled in the countryside, just ten minutes north of Waterloo: a thoroughly modern city, globally renowned for its techy pursuits. Elmira, meanwhile, has a robust population of old order Mennonites, who provide the steady ambience of jingling bridles and clip-clopping horse-and buggies. You can wake up in the middle of the night and believe yourself a Victorian Duke or Duchess, before realizing that a Mennonite is just getting his grocery shopping done at the twenty-four-hour Foodland, where he will shop under halogen lights, buy in bulk, and pay with a debit card.

The juxtaposition of Elmira and Waterloo frays the fabric of time (and re-stitches it on an antique loom.) To leave Elmira, on the especially nostalgic New Jerusalem Road, you will surely pass bonneted women selling flowers or produce. There is a house of fieldstone. There is a one-room school, from which boys in caps and suspenders, and girls in long dresses of muted pink and purple, go to and from, walking on the side of the road, swinging metal lunchboxes, or skates in the winter. They never make eye contact, oddly. It’s like you are swooping through a colonial painting as a disembodied ghost.

Five minutes later, and you’re in Waterloo, amongst thousands of university students. Many are computer science prodigies from Asian megacities. Everyone is slung with laptop bags and carries coffee. They text, listen to music and have fashionable, but not timeless, hair and clothes. They also ignore traffic. If you were on campus in September 2012, you might have seen Dr. Stephen Hawking. He was conducting research at the Perimeter Institute of Theoretical physics. With all that in mind, if we could travel forward through time, to the year 2100, I would love to learn that these two cultures cross-pollinated. It could make for a new literary genre. Perhaps cyber-agro punk?

One final anachronism, or charm of Elmira: every day at lunchtime, the fire station produces a siren that the whole town can hear. It wails from beside our bulbous water tower: Lunchtime! But it also functions like doomsday alarms of Cold War America. Why in Elmira? Perhaps because of the Chemtura Plant, which manufactured Agent Orange for American napalm strikes in Vietnam. The siren has sounded before when Chemtura caught fire. A black cloud covered Elmira one sunny morning. I can distinctly remember sitting in traffic to evacuate town, as horse and buggies fled to safety along the shoulder of the road, leaving my parents and me in their dust. It was something close to a religious experience. I was, ironically, on my way to get my G class driver’s license.

Towns with prominent natives and former residents are asked the cliché “Is there something in the water?” And because of Chemtura, Elmira’s drinking water is actually poisonous. So we can in fact say, “Yes, there is something in the water. Don’t drink it!”  A handful of NHL players have roots in Elmira. There are many others who lack celebrity but are formidable with their intelligence and character. We can also be proud that author Malcolm Gladwell once lived in Elmira as a sapling. His writing could very easily be the best thing Elmira has helped to produce, excluding that which you drizzle on pancakes. For all of its residents, and the bucolic imagery it has furnished my mind with, I’m proud to call Elmira home, even as I travel beyond its pastures.

Ed Scherrer is a native of Elmira, Ontario. He is a graduate of Columbia College Chicago’s Fiction Department. He currently lives in Toronto.