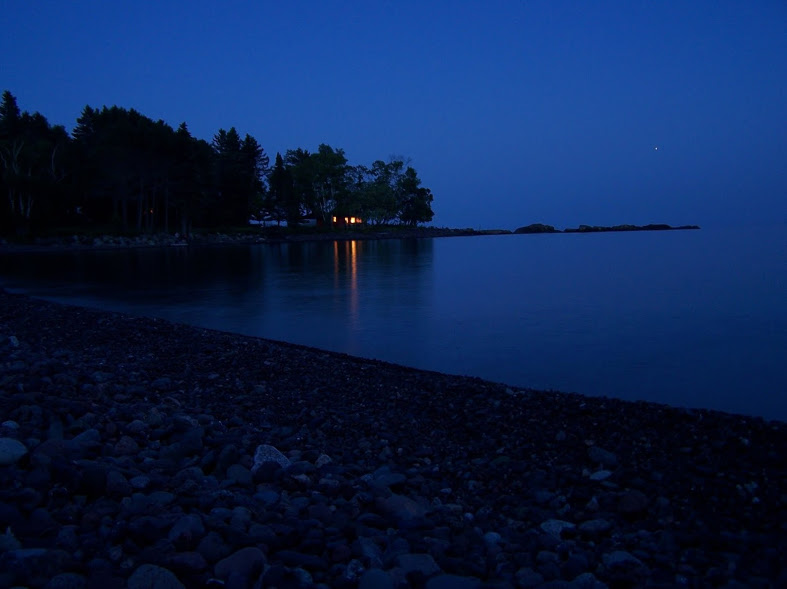 Just north of Little Marais, Minnesota a narrow wooded road snakes from Highway 61 down to Lake Superior. Our family’s favorite place on earth, Fenstad’s Resort, perches there on the lake’s North Shore. It is a small unassuming “mom and pop resort” tightly woven into our personal histories. Year by year our photo albums chronicle growth and change in the same beloved spots: around a driftwood fire on the beach, high on the cliffs looking north to Canada, gulls circling and delicate blue harebells nodding in the breeze. In the rocky harbor anchored by the old fish house, an upside down horseshoe above its door.

Fenstad’s has provided snug respite to families for more than 100 years, but was first discovered by ours the year after my dad died, when Mom instigated an annual retreat with grandchildren. But soon one summer visit wasn’t enough and we joined the privileged few with a yearly August reservation—fleeing the heat and humidity of Minneapolis/St. Paul, just four hours south. The North Shore’s natural air conditioning cooled and calmed us, courtesy of Lake Superior, the largest, deepest and coldest of the Great Lakes.

On that first visit in June the ice was off the lake, but as we passed through Duluth lilacs still bloomed—a full month later than in St. Paul. Heat was sorely needed in our little three room cabin at night and Mr. Fenstad hiked up to Hilltop cabin after dark to install a new thermostat. It was a cozy way to get acquainted—the kids tucked into beds and air mattresses, and mere curtains for doors. My mom and Mr. Fenstad were similar in age, and his wife and two grown sons helped run the resort—all quiet Nordic types and dedicated stewards of the land. Seventeen rustic cabins rimmed the beach, skirted the two small rivers that rolled into the lake, and climbed the hill to the cliffs adjoining unspoiled state land.

The moment we arrived, the baseball player trudged up a river path in search of a sturdy stick for smacking rocks far into the lake. The agate hunter sifted stones at the water line, alert to the tell-tale translucent swirls, and occasionally reminded herself to look up, to the distant horizon—no land visible across the freshwater sea. Grandma strolled, searching for one smooth oval stone among the thousands that lined the lake in shades of charcoal—the one she would dub a perfect “worry stone.” The hiker headed up to the cliffs, and the girl cousins lit off for the swings, or perhaps the tether ball—legs lifting, hair blowing, giggles floating back on the breeze.

The Fenstads provided what we needed and thankfully they knew when to stop. Knotty pine paneling, large windows onto the lake, spare, but comfy furnishings, a basic kitchen, no television, and until recently, no cell phone service. Heaven. Regulars at Fenstad’s don’t long for jacuzzis, granite countertops or channel surfing. Dramatic north woods views, quiet and the simple pleasures of outdoor living ruled the days. Raspberry picking with the sun hot on our necks and the smell of tar rising from the wooden bridge over the creek. Beach time building rocky dams, tiny houses, paths and gardens, while lulled by the lap of waves. And competitive hunts for quirky driftwood finds—look, it’s a funny bird, an alligator, a dog.

Fenstad’s anchored our world, but we ventured out occasionally to state parks like Temperance boasting narrow waterfalls churning their way to the lake, boreal forests of birch and pine and boiling rivers the color of root beer. Few seemed to find our spot near the beach at Split Rock, but we ran for it just in case others dared infringe on the lone fire pit for our hot dogs. The crowds clustered up at the famous lighthouse while we gazed at the postcard view from the shade of birch trees below. Birches dubbed “dalmatian trees” by the baseball player as a four year old, noting their dappled bark.

On hot August days the Baptism River at Tettegouche lured us in to swim—its water warm next to Superior’s legendary chill. Each year waves and weather reshaped the mouth of the Baptism and its small beach. In narrow years the river spat us far out into the lake at great speed—an exhilarating ride that entailed a tough swim back to shore.

Later, Grandma unpacked the picnic bag under the lone cedar tree—a speck of shade nestled between the small beach and two cliffs. My mom was the Queen of Picnics, she-who-would-not-willingly-eat-in-a-restaurant, weather-permitting (or not). We lunched on sandwiches and oatmeal cookies while behind us walkers hiked by intent on Shovel Point and jaw-dropping views. As we settled into post=meal snooze time, young daredevils jumped one by one from the rocky crag into the river. Often it was the afternoon heat that chased us back to Fenstad’s, or the biting flies. Sometimes it was the summer fog. We’d see it first as a narrow white line hovering on the horizon, then a curtain drifting closer, to quickly engulf us in damp, and temperatures dropping instantly by thirty degrees.

Twilight always found us back at Fenstad’s around a driftwood fire toasting fire food. Food on a stick of course, as at the Minnesota State Fair, s’mores naturally, but also our family specialty—dough wrapped around a green stick—a burnt biscuit with butter and local blueberry jam. There was no better place to spend a summer evening than on our own beach, gazing at the ragged silhouette of the Sawtooth mountains while the sky went pink.

The hiker roamed far for chunks of birch, while the girl cousins settled for tinder left in tiny piles by the waves. They sang softly, practicing their songs for Grandma—performances for later, after dark, while swatting mosquitoes, listening for loon calls, and hoping for the northern lights. As usual, the baseball player sent stone after stone towards the setting sun. Later he will set down his stick and pick up his guitar to join them.

Lindsey McDivitt is a Minnesotan now living in Michigan and expanding her explorations to all five Great Lakes that rim its upper and lower peninsulas. Sandy beaches and even swimmable lakes! But Superior still has her heart. Now writing for kids and adults, she worked in healthcare for many years, primarily with stroke survivors. Lindsey believes children’s picture books are ideal for sparking conversations to increase understanding between generations and change attitudes to aging. She reviews Positive Aging picture books on her blog at www.a-is-for-aging.com.