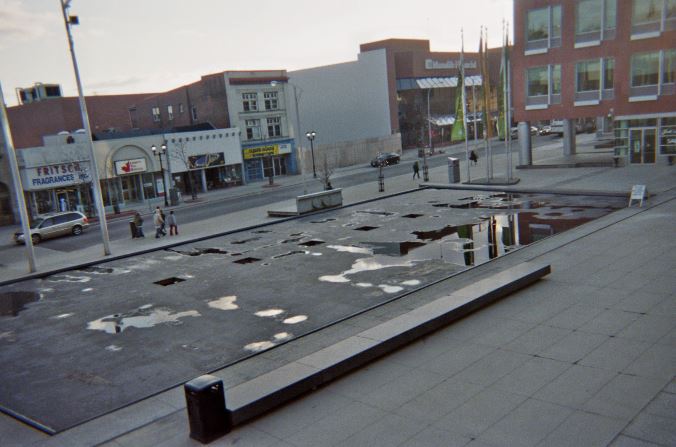 On Friday nights, I would meet Ren somewhere downtown around 6 or 7 o’clock, usually at the coffee shop. The coffee shop was not the only coffee shop in downtown Kitchener, but it was the only one that one might describe as a “café.” That would change. In only a few years, after I moved away for college, the Coffee Time at Ontario Street closed down, Donut City on Gaukel disappeared, Tim Hortons gave up on Market Square, while places with “Café,” “Commons,” and “Bean” in the name took their spots.

Sometimes we started our walks through Victoria Park. In only a few hours it would fill up with teenagers getting high and breaking things. For now, though, there was no one in the city. Those kids were only just slinking out of their parents’ houses. The university students didn’t come downtown, and the  people who worked in the offices were all at The Still, drinking and gnawing on suicide (suicide, not ghost pepper) chicken wings before returning to their subdivisions for the weekend. Back then, we didn’t usually cross King Street in front of The Still or the other restaurants, unless it was to pass through the square at city hall. Those two blocks had what they call “nightlife.” We preferred streets that led into parking garages, the quiet and wooded lanes around the park, the flat and empty roads around the train station, the dilapidated area south of Market Square, and the plazas in what only the two of us called Little Saigon. Little Saigon was a short strip of King Street by the school where you could get phở and Vietnamese subs (before we knew they were called banh mi), packaged seaweed, Chinese DVDs, and suits from a tailor from Haiphong who called his store “Hong Kong Fashion.”

On a raining October evening we shambled through Victoria Park. We circumnavigated the lake and wound up back behind the bus terminal, following a forgotten-looking street, lined with dumpy looking houses on one side and a parking garage on the other. It lead to the Lang Tannery, an enormous pink brick structure that looked deserted like all the other factories along the railroad and Victoria Street. But people lived there, and there was a karate dojo and several signs for photography studios and other things you didn’t really think about. Ren had wound up meeting some college-aged hippie who rented one of those apartments. The building seemed half deserted and half lived-in, like a gentrified squat. There was sawdust on the hallway floors and it seemed like it was under construction. It was. Later it would house another one of those “cafés,” an overpriced Toronto chain that plastered its walls in quotes from French novelists, along with a Google office.

The two of us never really started going to parties. Instead, we started hanging out with a few Waterloo kids who skulked around the city, drinking outdoors because they didn’t want to wait for someone’s parents to leave town. They didn’t stop in winter. There were the gaps in the city, and we were lucky enough to live in a city that fell asleep by midnight. We stayed away from the students bars up King Street. That’s where the police inevitably were. We stuck to the reservoir behind Waterloo City Hall, we stuck to parking lots and churchyards and the loading docks behind Len Mills, by the train tracks or further along them.

The quickest route between uptown Waterloo and downtown Kitchener wasn’t King Street, which almost took a ninety degree turn at the hospital, but the train tracks. This is a city that was built around trains. Trains were part of our night life. We heard them clicking as they sat in the station, we watched them pull laboriously back and forth in some kind of freighting dance, we stumbled into the ditch when they roared past us, half-hiding our liquor bottles. It was one of the local spurs that diverted from the main trunk, like a tributary that had collected freight from the factories to the north and southwest. It crossed Louisa at grade and snaked behind the houses and warehouses in the old neighbourhood that bridged the two cities. The trains were responsible for carving those gaps out of the urban fabric, the places where we wasted time. You emerged back onto the streets at Len Mills.

In the week before Christmas the coffee shop closed by six in the afternoon. Ren and I met at the Tim Hortons next to the school instead. That night, Victoria Park was packed with families looking at the Christmas lights.  We were not used to sharing our nights and our city. The Iron Horse Trail led out of the park to a forgotten sector between downtown and the sprawling geography of subdivisions and super-plazas. We came out around Sterling, behind the Schneider slaughterhouse. There was an open storm drain running through this sector of Kitchener – a concrete ditch with a stream on the bottom. The same drain emerged on the other side of town by my mother’s house, but vanished in between. I thought it could be a canal lined with bars and bistros and bouquinistes like in those cities people dreamed about seeing. But then, wouldn’t we have to share it? When we kept walking, we got to the reservoir. We didn’t know there was a reservoir here. We were south of St. Mary’s hospital, a glittering anomaly down Queen Street, a promise that there was some kind of life out past downtown. On little more than a hunch that we followed an unknown residential street to Charles, not far from Ottawa. There was a Tim Hortons where we sat and had donuts.

Jason Freure is from Kitchener, Ontario. He has published poetry in Vallum, ditch, Echolocation, The Hart House Review and Epiphany. He has also published essays and reviews in Lemon Hound and The Puritan.