This last summer, our regional literary community lost one of its most passionate ambassadors and with our most current issue which includes work from Toronto writers who directly or indirectly came to us through Darryl Salach, we thought it was time to pause and remember Darryl, who died June 19, 2015 at the age of 54 after a lengthy battle with ALS, according to his obituary. 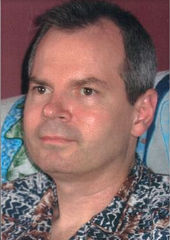 Darryl was the editor of The Toronto Quarterly and championed many writers from Ontario and beyond.  Fortunately for us, Darryl was also a contributor of Great Lakes Review as well as an early supporter and advisor, anxious to see the writers he published cross the border and hopefully gain a new audience.

After sending us works from writers who he believed in, he interviewed our Hamilton editor and eventually submitted his own work. Reading his contribution after learning he had succumbed to his illness made for a different experience. He never said if the poem in GLR was confessional or biographical but I was unable, at least this after his death, right or wrong, not to read it as personal.  Speaking with other editors here at the review, we decided not to include that particular poem at this time but instead include the poem that was included in his obituary.

In 2011, we had a conversation about printing a roundtable discussion that he would take part in with his counterparts in Chicago, Buffalo, Cleveland, Milwaukee, Hamilton, Detroit and any other editors running lit journals in the region who may want to participate. That project never progressed beyond its embryonic stage because it’s an idea, like so many proposals discussed, that we will get to, we have time, so we think.

The following is Darryl’s poem published in: “MESS the hospital anthology” by Tightrope Books 2014. It was included with his obituary at the time of his death.

It started with two rather

on the right side

and nape areas of my neck

all along my right side

ending with a final zap

at the base of my big

no inkling of reflex

was final and complete

I could tell by her

the result of the test

were not in my favour

but I smiled anyway

asked about her pregnancy

would be her last day

morning and after that

then parted her lips while

rubbed against her swollen

to rid myself of the hospital

the results of the EMG

with the clinic’s chief

I heard a faint knock

on the examination room door,

my parents walked in

thought it best that they were

with me for the final

my father asked about the machines

and how they worked

I laughed a little and instructed

my mother, no tears

before the examination room door

opened and the two neurologists walked in

while the pregnant neurologist gripped

at her swollen tummy

down my mother’s face.