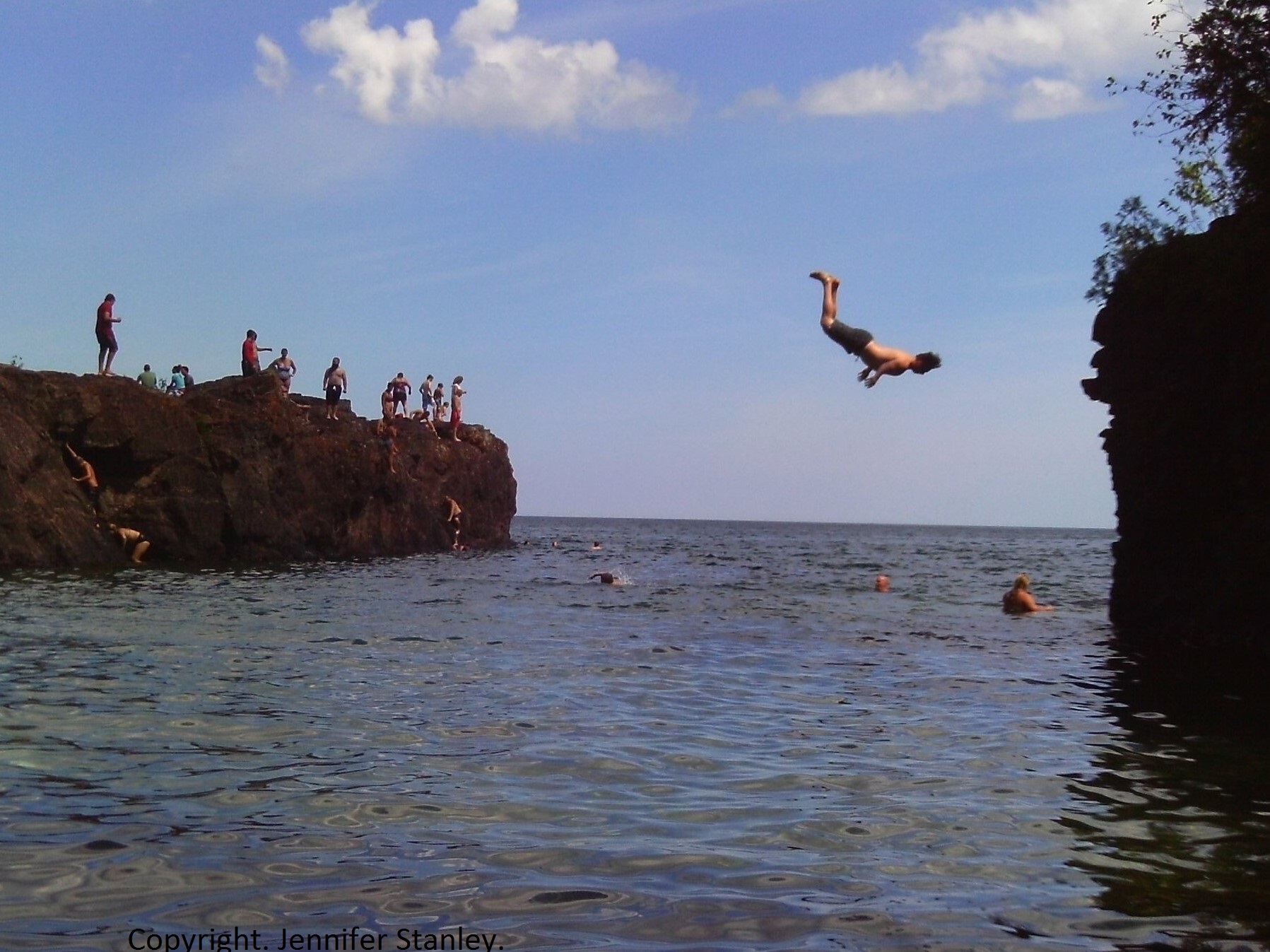 As a lifelong resident of Marquette, Michigan, located on the south shore of Lake Superior, I consider myself fortunate. Wherever I have lived in the city, I have been only moments from the lake, able to see it from outside my front door

Throughout my life, the lake and I have harmonized. As a child, I mimicked its spontaneity, dove in to dodge waves, oblivious to its cold temps. As a teen, I became intimate with its passionate pulse, perfect background for young romance. As an adult, I relived the intoxication of its danger, its wonder, watching over my own child’s fear and wild delight at the force of its storms. As I grow older, I find reliable companionship, the comfort of lifelong friendship in its rhythmic accompaniment during contemplative walks.

Recently, I realized how I have taken this relationship for granted as the result of a trip to the Atlantic coast.

When I first viewed the Atlantic Ocean from a New Jersey boardwalk, I said “It looks like Lake Superior.” This seemed to disappoint my host who knew I’d never seen the ocean, and I think felt deprived of the vicarious experience of my amazement. I explained that it appeared to be not so different from something I see nearly every day. However, as I spent more time getting to know the ocean, I realized the difference.

True, there are obvious similarities between the two bodies, which share vast breadth, unending horizons, but each has unique aspects, better appreciated after experience of the other. The fact that the sea is salt water, the lake fresh, is a difference which is a source of many others, for example, scent. Superior, though it has its own fishy ambience, does not overpower with pungent brine. To the panoramic view, colors differ, the sea being more aqua green than Superior’s robin egg or cobalt blue.

The large turbulent waves of the Atlantic make Superior’s seem clear and hard by contrast.  Under similar weather conditions, breaking waves of the ocean are foamier, spread and hiss a greater distance up the sand, while the sharper-edged waves of Superior seem to shatter and scatter. Because the lake is a smaller body of water, it feels more dense, compact. Ocean water has more space to stretch out, travels a greater distance, seems more diffuse. I hear this in the sounds of surf. While the ocean roars and pounds, the lake glugs, dunks, and gulps. Superior has less predictable shifts in water level, and where the regular tides of the sea litter the beach with shellfish, shells, and sharp mosaic fragments of shells, Lake Superior beaches are awash with pebbles, and agates, and driftwood.

Risks to the swimmer also differ.  There is no danger of jellyfish or shark attacks in fresh water, the most threatening creature likely to be found in the lake a transplant lamprey eel.  More remarkable is the difference in shoreline water temperature. Compared to the oceans moderate temps, Superior’s unmatched frigid bite is a nerve-numbing awakening not for the timid heart. This ultimately protects Superior’s purity, and primarily, it is this characteristic I have most taken for granted.

Marquette may be the most populated area in Michigan’s Upper Peninsula, but even so, its beaches, for the most part, in contrast to those I visited on the Atlantic, are generally open to the public at no cost. No purchased pass is required to spend a day or season of days on Superior’s convenient sands.  Yet, on most of those days, one will not find huge concentrated crowds taking advantage of that. In contrast to the popular East Coast beaches I visited on the Atlantic, the public beaches around Marquette are not massed with people, packed like cliché sardines under miles of striped umbrellas.  There are no troupes of solicitous hot-dog vendors, armed patrol guards, enormous bulldozers at daybreak, turning over yesterday’s garbage strewn surface, no airplanes with flying billboards urging the purchase of dinner reservations, no blocks upon blocks of full parking lots, no rows of expensive clubs playing conflicting raucous music.

On the shores of Lake Superior, one is more likely to find a bike path winding through stretches of sparsely populated beachfront pine forest than commercialized entertainment. Even on the most popular Superior beaches, one can easily wander only a short distance to find solitude, privacy, peace.

Certainly, both the northern “Inland Sea” and the Atlantic Ocean are lovely at sunrise, or under the full moon of a July night. Still I have to admit, my visit to the East Coast of the great Atlantic only deepened my preference for the Great Lake above the Mackinac Bridge. I now more fully understand its unique beauty, and more greatly appreciate the privilege of living with it daily.

Jennifer Stanley is a native of upper Michigan and has an MA in writing from Northern Michigan University. She has contributed to a variety of publications, including The Marquette Monthly, The Great Lakes Poetry Project Anthology, Above the Bridge Magazine, Country Woman, and The American Poetry Review.