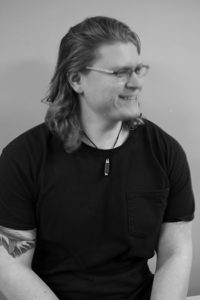 Dom Fonce joined the Great Lakes Review team as a poetry editor in February 2020. He also serves as a co-editor-in-chief of Volney Road Review, founded in 2018, and you can find his work in numerous literary magazines, journals, and anthologies.

A graduate of Youngstown State University, he lives and works in Youngstown, Ohio.

We spoke with Dom about his roots in the Great Lakes region, his chapbook, and advice for writers who are just starting out in the writing and publishing process.

You’re a native of Youngstown, Ohio. What makes that region unique, and how has it influenced your work?

Firstly, I would like to give credit to Rochelle Hurt and Allison Pitinii Davis. I think there is tons of evidence to show they helped start a small literary movement in the Youngstown in the 2010s—a movement away from pure nonfiction and into the creation of a regional mythology.

Hurt writes in an interview with Belt Magazine, “I suddenly realized how surreal the Rust Belt must seem to an outsider. There are these remnants of a grand past all around us (music halls, theaters, mansions) but they’re abandoned, hollowed out, dilapidated,and overgrown with nature. It’s a strange mix of past and present, grandeur and grit.Using elements of surrealism and magic seemed like the best way for me to write a place like Youngstown into something new. A mythical approach allowed for this more than a documentary style would have.”

Davis writes in an interview with Midwestern Gothic, “I’ve been warned that if I keep writing about the Youngstown area I’ll become a ‘regionalist,’ but northeast Ohio is a universe. I could write about it my entire life and still not say all there is to say about it.”

Youngstown has a very rich, but complicated, history. The city, in my opinion, is oddly designed. Mill Creek Park is not a normal park—it is literally part of the city itself. In many cases, I cannot tell where the park ends and the city begins. I drive from the West Side near Cornersburg through the park into downtown every day. I’m sure that the“West Side” and “Cornersburg” means very little to outsiders, but these Youngstonian terms are very meaningful to us. Every side and neighborhood of the city is different. Brier Hill is very different from Fifth Avenue. Every neighborhood is connected by the park, and it is one of our strongest commonalities.

I can go on and on about Youngstown. Simply put, imagine a dilapidated city taken over by vegetation with mob ties, a Cinderella bridge, a witch’s cave, the ruins of an old amusement park, a paranormal location just across the Pennsylvania border called Zombie Land, a historic event called Black Monday, and recollections of the glory days—with the majority of the information having been passed down by word-of-mouth rumors—and you can see how the mythologies create themselves.

Tell us about the origins of Volney Road Review, the journal you co-edit.

VRR was created by N.P. Stokes and I in 2018. I came up with the name to give homage to Volney Rogers, the man who donated the land that became Mill Creek Park. The actual Volney Road is a historic neighborhood in Youngstown, filled with amazing “park homes.” We will be open to submissions for out fifth issue in spring/summer 2020.

Your chapbook, Here, We Bury the Hearts (Finishing Line Press), actually contains a poem that Great Lakes Review published back in 2017 — “An Elegy for the Lost Athens Sixty-Two.” How does that poem fit in with the rest of the chapbook?

Here, We Bury the Hearts intersects the death of my father from cancer in 2015 and many historical deaths in Ohio. The relevance of the heart imagery obviously reflects the grief my family went through, but also is a play on the Ohio slogan “The Heart of It All.” The heart also appears in “An Elegy for the Lost Athens Sixty-Two,” as if the heartbeats of all Ohioans are connected, creating the shape of the state itself.

My good friend Brett Maszczak (shout out to him) took me to visit the cemetery at the Ridges Insane Asylum in Athens, Ohio. I was taken aback when I saw a grouping of tombstones set aside—fifty-pound slabs of stone, only knee-high—with a commemorative plaque from the city. The plaque states that the graves of these sixty-two tombstones have been lost throughout time, and that the city plans to eventually locate each grave and replace the tombstones. I find the story of these lost sixty-two patients (mostly Civil War soldiers) to be eternally important to us, as humans, as we move forward—hopefully more carefully—in time.

Beyond your chapbook, you’ve got dozens of other literary magazine publications to your name. What’s your advice to submitters who are just starting out in their writing/publishing careers?

Even though my focus is poetry, I recommend that every writer write a really bad novel. In 2014, I wrote 300 words a day with no exceptions for a year. The quality of the writing was horrible, but that was fine—I was just playing around. I think that essence of childlike, creative play is what successful writers replicate in each piece they publish. I didn’t begin writing poetry seriously until 2017 and my voice surfaced instantaneously. I suspect it did so because all my bad writing habits had been ironed out in the years leading up.

It sounds silly, but getting published frequently is all about writing well or being famous. The only way to get good at writing is to write a lot, go to workshops, and see how others react. The people who can’t write will shower your work with praise no matter what. The people who can write will give you genuine criticism. If your work surprises someone who can write and give good criticism, then you know the work is good. Then submit that work to Great Lakes Review.

Your Twitter bio includes the sentence, “I mostly use Twitter to complain about the Browns.” So who would win in a fight: you or Baker Mayfield?

I would never lay a finger on our franchise quarterback, even though he did disrespect my Buckeyes.