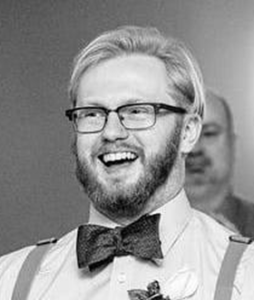 A Michigan native, Jimmy holds a Master’s degree in English language and literature from Central Michigan University and studied film and creative writing there as an undergraduate.

His work can be found in The Central Review, Gyroscope Review, Glassworks, and elsewhere.

We talked with Jimmy about Michigan’s influence on his writing, the relationship between fiction and poetry, and what he’s hoping to see in the stories submitted to Great Lakes Review.

You’re based in Michigan between Lakes Michigan and Huron. What makes your area unique, and how has it influenced your writing?

What I think makes Michigan generally unique is that the state has everything! In just a few hours, you can go from the heart of a major historical city like Detroit, through its suburbs, and find yourself at an ocean wide enough to be the sea, or a small rural town, or even sand dunes.

I grew up in Detroit’s suburbs, went to school for seven years in the very center of Michigan’s lower peninsula, and now live in Grand Rapids (Beer City, USA!), and each of those backdrops has its own unique flavor. I love Michigan’s geographic variety because, like people, each new setting has its own personality and heartbeat. I have the state of Michigan to thank for all of my interests while I’m writing—my characters are pulled from the people of the Midwest, my settings mirror Michigan’s varied landscape, and I speak the general language of Michigan.

Your Great Lakes Review bio mentions that the stories that grab you are the ones “that push linguistic boundaries, blending prose with the innate poetics of language to create something altogether new and unique.” Is there a short story that encapsulates this for you?

Simply put, I love when writers heighten their language. It shows me a kind of tenderness and care towards what they’re writing about.

One recently published story that really does that for me is “How do I get unlost on my own” by Lucy Zhang, published by Jellyfish Review. On its surface, it’s a story about an ugly duckling that drowns. In the language, though, the duckling “slips into the gap where no light reaches.” It’s subtly poetic how Zhang transforms the water into something so much more, and the blending of prose and poetry is another fascination of mine.

I also like to think of linguistic boundaries as cinematic editing—I was a film major as an undergrad. Zhang does this in how she transports from the water in one sentence to the narrator’s interiority in the next. It’s a wonderful example of heightened language being used very purposefully.

You’ve published both fiction and poetry in the last few years. Do you always know from the first word whether you’re writing a poem or a short story? What do writers fail to appreciate about the relationship between poetry and fiction?

Something that every creative writing professor has told me at one point or another is that poetry and prose do a great job of helping one another. I like to think of it as working out different parts of the brain; one day I might run the fiction treadmill, the next I’ll lift poetry’s weights. When I sit down to write, I typically know whether what I’ll be working on is prose or poetry, but I do like to play in that weird, fascinating middle ground between the two. A lot of writers working today seem interested in breaking down the binary between the two genres, which I think is fantastic.

I think what people fail to realize is how each genre specifically informs the other. My fiction has improved by writing and reading poetry because it’s allowed me to find new ways of implementing language to wring as much as I can from my images, my characters, their interiority. On the other hand, fiction likes to remind my poetry that language works best when used consciously, that even poetry typically comes in the form of sentences and, when it doesn’t, that should be a conscious decision on the part of the writer. I think “conscious” is the key word—that what we do in writing is a series of conscious choices that we make—and each form provides a new way of looking at the other.

What’s a piece of advice you can pass on to submitters who are just starting out in their writing/publishing careers?

As someone who’s also just starting out in my writing/publishing career, my biggest struggle is forgiving myself. For not always writing every day, for getting frustrated with a WIP and setting it aside for weeks at a time (or longer), for spending time doing things wholly unrelated to writing, for being almost 26 and not even having a Pushcart yet(?!). Writers like to compare themselves to superlative examples, so expectations are always high.

I’ve taken a pretty traditional route—studied creative writing as an undergrad, then as a grad student, and now I’ll be starting an MFA in the fall with the hopes of publishing more and more in the meantime—and I think what comes with academia is a need to always have things to work on. If all I did was write, write, write, I’d have nothing to write about.

My advice, then, would be, yes, to write, but also to be okay with going on walks, playing video games, sitting at the bar in a brewery (not at a table/booth!) and meeting strangers because, ultimately, that’s what you’ll be writing about. With that, of course, I would say to write frequently (see working out metaphor above; you’ll never lift 300 pounds if you don’t graduate from 100 to 150 and so on), and to submit just as frequently, the latter of which is something I think people newer to the industry have a harder time with.

Your Twitter (@JimmyHollenbeck) bio mentions that you’re a beer enthusiast and a listener of too many podcasts. Can you give us a few podcast/beer pairings to try out?

Of all the questions, I might be most qualified to answer this one! If you like funny podcasts, My Brother, My Brother, and Me goes well with something light like Atwater’s Dirty Blonde or Old Nation’s M-43. Another great funny one is Harmontown, but that one is a bit darker, so I’d say Right Brain Brewery’s CEO Stout.

For more serious podcast listeners, try Revisionist History by Malcolm Gladwell with Founders Brewing’s Green Zebra or Atwater’s Bloktoberfest. A good one to binge because there are so few episodes as of right now is Nice Try!, which would go well with Brewery Vivant’s Farm Hand farmhouse ale. Political listeners might try Red Library with Dragonmead’s Erik the Red ale.

Do I get extra points (pints?) because each beer is from a Michigan brewery?