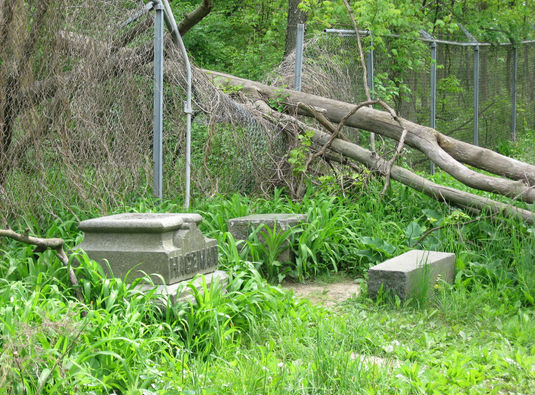 “Located near the southwest suburb of Midlothian is the Rubio Woods Forest Preserve, an island of trees and shadows nestled in the urban sprawl of the Chicago area. The rambling refuge creates an illusion that it is secluded from the crowded city that threatens its borders, and perhaps it is. On the edge of the forest is a small graveyard that many believe may be the most haunted place in the region. The name of this cemetery is Bachelor’s Grove and this ramshackle burial ground may be infested with more ghosts than most can imagine.” — prairieghosts.com

The dashboard clock read 12:34 pm as we sped off on his tour of the weirdest places in Chicago: the Starr Hotel on Madison Avenue; Indian Boundary Park on the northwest side, to see the chickens with Beatle haircuts; and then the leaning tower of Niles, half the size of the real one, and in Niles.  We were speeding around so much it felt like one of those Italian jet-set movies, where the woman is wearing big sunglasses and a scarf and the guy drives a red sports car (except we were in an orange Rabbit).  Our last stop, a cemetery.

“Bachelor’s Grove Cemetery,” he announced, putting the car in park.  “The most haunted cemetery in the entire Midwest.  Nobody’s been buried in it since the ’40’s, and it’s all overgrown and mysterious.  All the headstones have been moved, but nobody knows how.”

We got out and started up a gravel path that became less gravel and more dirt the farther we walked.  The cut grass became tall, prairie-type grass and shrubs, and little trees became bigger trees that obscured the hot sun.  The alternating patches of sunshine and shade that we were walking through, with him leading the way, made me a little dizzy.  I could hear birds high up in the trees, and bugs buzzing.

“This was the original entrance,” he said, as we passed between two worn-down pillars, “from the 1800’s.  This path we’re on was made by people just walking through.  That’s how many people have walked here.  Both living and dead — ha-ha!”

The overgrown grass made a dry sssh-ing sound as we walked past the half-hidden tombstones.  Some had been pushed over, others looked like a sledgehammer had demolished them.  I could hear the wind in the tops of the trees: like in movies when people walk through wheat fields at the height of summer, and the sun is all around but the wind is far away.  We walked silently for a while, stopping when he would point out bigger stones too heavy to push over.  We’d read the names, pause for a second, move on.  Then the path curved to the left, and when we came around we saw a big fallen tree with leaves still on it, blocking our way.

“Must’ve been struck by lightning,” he said.  “Oh, yeah — look.”  He pointed at the blackened trunk to the right of the path.  As we came up on the tree, I looked to see if there was some way to walk around it, off the path, because I didn’t want to have to climb over it and make a fool of myself (and there wasn’t enough space to crawl underneath).  He just put one hand on the trunk and hopped nimbly right over it.  Then he turned around, waiting for me to follow.

“I’ll never be able to do that,” I said.  He just laughed a little and held out his hand.  I thought:  If I take it, how will I let go? Because there was only one thing that holding hands meant. But I had to take it, or walk around the tree, through the branches and high, tangled bushes, and that wasn’t an option.

“What if I fall backwards?”

He stuck his hand out farther.  This time I took it, and he guided me over.

“There’s the most mysterious part of the place.”  In front of us was a lagoon, covered in bright green algae.  The path ended there.  Surrounding the lagoon was a chain-link fence, with a section cut and pulled back.  In the half-shade, half-sun, the pulled-back part looked like a sheer green veil.

Our shoulders were almost touching.  I looked back at the pond.  I was nervous, didn’t want to look at him and wanted him to stop looking at me. But he kept looking, calmly, as if he were trying to communicate that he wasn’t going to touch me.  I wanted him to, and I didn’t.

“I think I would want to remember,” I shrugged.  “What about you?”

“Hmm.  There are definitely some things I wish I could forget.”

There was something serious in his voice that wasn’t there before — something bad must’ve happened.  Well, he was eleven years older than me, and nothing had happened to me. Yet.  The day before, in journalism class, Sister Irene had told us to be aware of what we were doing today at 12:34 pm, because it was May 6, 1978, and the numbers would all add up: 12:34, 5/6. ’78.

“Were you in Vietnam?”

He laughed hard, and I got mad.

“Are you laughing at me?”

“Hey, did you bring any drugs with you?”

He did a double-take, then laughed — again!  He’d laughed at me twice!

“Oh, fuck you,” I yelled, turning away.  I was going back to the car and that would be the end of —

But the stupid tree was in my way.

I stopped short; he crashed into me.  Then he was holding me, keeping me from falling.  Then he backed off.  And then I took a step toward him, and put my arms around his waist.

Sharon Mesmer is the author of two short fiction collections, both from Hanging Loose Press, and a collection of fiction in French translation from Hachette. She is also the author of three poetry collections, with one forthcoming this fall. She teaches creative writing -- fiction and poetry -- at New York University and the New School. She has been a recipient of a Fulbright Specialist grant and two New York Foundation for the Arts fellowships. Four of her poems appear in the second edition of Postmodern Poetry: A Norton Anthology, published in 2012.