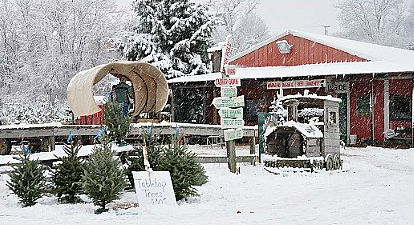 My aunt and uncle owned a Christmas tree farm out on Hickory Ridge Road in my father’s hometown of Milford, Michigan.[1]

The Broadview Christmas Tree Farm was 118 acres of scotch pines, spruces, and douglas firs, among other varietals. Every year, on the day after Thanksgiving, my parents and I would pile into our blue minivan and drive the forty-five minutes from my hometown in search of the perfect tree. That journey was epic to my young eyes. When we finally pulled onto the rural two-lane road, I was in heaven: houses miles apart, overgrown bramble, empty and dilapidated bars, other cars so infrequent as to suggest total solitude. Our minivan would glide over the hills, rolling up and down, while I stared out the side window at the sparse landscape. We’d approach the last, impossible hill, towards the arch of forest, plush trees that looked like they’d survived centuries. We’d turn off through the woods, lumbering down a gravel drive that opened into a clearing where my cousin, Adam, and some of his high school buddies would be directing traffic, getting the cars parked in fine rows. Adam’s dad, Jim, once the star running back at Milford High, took out groups on flatbed trailers, bouncing through the farm to find their own perfect Christmas trees. My aunty Marty commandeered operations in the barn, fixing batches of fried chicken while Becca, Adam’s older sister, made sure enough silverware was stocked, pouring hot cider for the local families.

At the end of the day, the whole family would retire to Marty and Jim’s house across the street–not exactly across, we had to go back up the gravel hill, over Hickory Ridge Road, turn down Broadview Lane and drive a half-mile through the woods, where the trees parted to reveal the gorgeous house my uncle had built, the A-Frame design, an angled roof that shot skyward like a church steeple. Around back was a long deck that hung over a wide ravine. It was quiet and isolated. It didn’t occur to me then that there was a little bit of defiance about living so far out in the country, away from the consumer machine. It may have taken longer to get a quart of milk, but they didn’t need all that other crap, just a simple existence in the middle of nowhere.

In Farmington, part of a ring of the Detroit suburbs that all look exactly the same, I lived with my parents in a bland,[2] one-story ranch with a pristine mowed yard and brick siding, nothing compared to the log palace my cousins occupied in the woods. Driving west from our Chatham Hills subdivision into downtown Farmington, we’d fly past a mini-mall, a bank, gas station, used car dealership, another mini-mall, bowling alley, another mini-mall, a venerable bar and grill called Dunleavy’s, another mini-mini-mall, a cemetery, and a funeral home, all the assorted landmarks of suburban sprawl.

In 1993, my uncle Jim announced to his wife of 23 years that he wanted a divorce. That same year, we discovered that I had severe allergies to the trees that lined the Broadview farm. My parents switched to a fake tree, folded out of a box that they kept in their basement. Since I’ve now moved away and only come home–if at all–a few days over Christmas, I’m no longer a participant in the ritual, the unfolding of the tree, the hanging of ornaments.

When I do come home for Christmas, my parents and I pile into my mom’s Buick and make the familiar trek to Milford. Adam has built his own house in the woods, on the Broadview property, and we spend a few hours of Christmas Eve in the presence of family: Adam and his wife, Kristen, and their two kids and Kristen’s parents; Becca and her husband, Ken, and their five kids; their other cousins from Marty’s side; and Marty, my not-aunt for more years than my real aunt but always my Aunt Marty. The men talk about guns, of which I can contribute nothing, or we’ll all talk about the Red Wings, of which I can contribute a great deal, or they’ll ask me about life in Chicago, where I’ve been rooted for a decade, but without my own home or kids or even a car. Uncle Jim lives in South Carolina, I think, and never returns for the holidays.

I still live in the Midwest but I feel so far apart from my family. Last year, the whole extended clan got together for a reunion: my dad and mom, Uncle Jim, Adam and Becca and their families, my other cousin, two aunts, and one uncle. I was invited off-handedly, a week before the orchestrated events, when I had work and a life I couldn’t leave behind at a moment’s notice. I wasn’t surprised. Adam once visited Chicago and tried to get me to have drinks with him but I declined, citing work and life, at a time when I could easily have arranged to meet him. We don’t talk on the phone and if you quizzed me about Adam’s and Becca’s kids’ names, I would barely pass that test.

Farmington is a ghost town now, the mini-malls three quarters empty, Dunleavy’s closed and torn down. Kids still live there but not many of them stay. Like most small towns in the Midwest, they grow up and move on to a different, but who can say better, life.

[1] Technically, they co-owned with Marty’s family and, technically, it was Highland Park Township, Michigan but I grew up thinking it was Milford, so I’m calling it Milford, deal with it.

[2] It was an excellent upbringing, safe and comfortable, and my parents house is enormous for three people, I just didn’t know that at the time.

Nicholas Ward's writing has appeared in or is forthcoming from HYPERtext Magazine, the Eunoia Review, Hobart, and the 2nd Story podcast, where he has been a company member since 2006. He lives in Chicago, with Amadeus the cat.