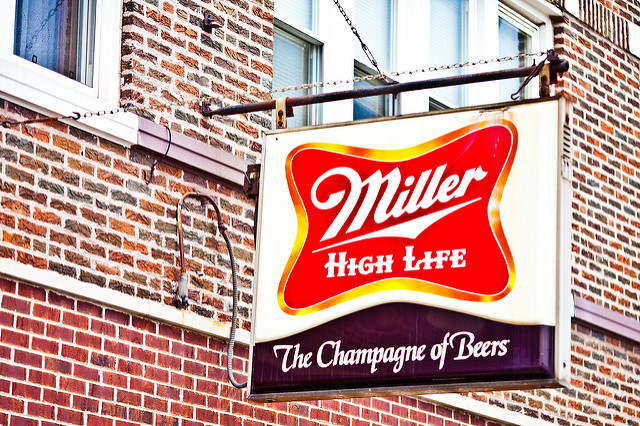 I didn’t notice how drunk my coworker Erin was until she fell down for the second time on our way to Summerfest.

Erin and I weren’t friends outside of work. We weren’t friends at work, either. The marketing firm we worked for took its company’s employees to Summerfest on the opening night of the music festival.  We were together in a group walking over from a bar on Water Street. I was one of the old ladies of the company at 27. Many of my coworkers were just out of college, or, like Erin, just 21.

For those of you not familiar with Summerfest, it’s an opportunity for all the bands you love to play on Milwaukee’s lakefront in late June and early July.  What the promotional materials don’t tell you is that it’s a ten-day chance for a million people to party till they puke a river of Miller Genuine Draft under a bridge.

He was not walking over with us. I didn’t tell Erin this, but while she was working on the second floor, Ryan would flirt with our boss, Jessica, who seemed interested in learning more about what he had to offer.

We pulled Erin up. We asked if she was okay. We progressed into the south gates of the Summerfest grounds. And then I realized what was happening: Erin was so not okay. She couldn’t walk without falling and it was up to me to ensure she returned home unharmed.  It was okay with me: I knew what could happen if you turned a blind eye toward another woman in need.  And the lineup that night sucked, anyway.

The other women went off into the night, not to be seen again until work the next day.  The 5 foot 8 inch me linked my arms under the arms of 5 foot 2 inch, 98-pound Erin. “I’M GOING TO TAKE YOU HOME!” I told her over the din. “I’M HOLDING ON TO YOU SO YOU DON’T FALL!”

“DON’T WORRY ABOUT HIM!” I shouted.

And we began our trek toward the North Gate, which would have the ATMs and taxis needed to get us back to my house on the east side, which had my car parked nearby.

Hours seemed to pass.  We were walking against a crowd of 200,000 people who were headed south on the grounds, toward The Fray playing at the Marcus Amphitheatre and the stages with the 10 p.m. shows. Neither of us said much to each other as we stopped at the women’s bathrooms.

But as we got to the midway point of the festival, security guards and other interested parties began to take notice of Erin’s current mode of transport. In response, I got her birthdate and started shouting out “TWELVE THIRTEEN EIGHTY FOUR! I’M TAKING HER HOME!” at anyone who raised an eyebrow.  They needed to know she drank legally tonight.

While we walked, I thought about the boys in my life that I treated like kings while they treated me like an assistant.

Erin and I finally got to the north entrance. I noticed there was a First Aid tent, so I thought it would be a good idea to get her checked out before we split. She was trying to convince me to let her call her friend Juan to give us rides back to our residences as I brought her into the tent. I emphasized I would be taking her home.

A medic took Erin behind a curtain and I looked around. There were three crying blonde women in various states of intoxication sitting against the wall. It was like I had entered into an adult daycare before naptime.

I took a breath and made eye contact with the crying girl in the middle of the group. Maybe this was a projection out of Psych 101, but I had an idea from where her tears stemmed. I said, “He’s not worth it.” She stopped crying. She didn’t give me a strange look, so I continued. “He’s not worth it,” I said again.

I also was amazed that there were so many dudes out there treating so many ladies like shit! I thought I was the only one, due to my weight and general awkwardness! I was concerned for Erin, yes, but this realization blew my mind.

“She’s right,” a man’s voice said behind me. “We’re not.” He brought Erin back out and released her to me.  She would be fine once she sobered up.

Tori Szekeres now lives 25 miles away from Lake Michigan in Chicago’s Northwest Suburbs. She enjoys stand-up comedy, graphic design and writing. She emphasizes that the names here are changed to protect the innocent.