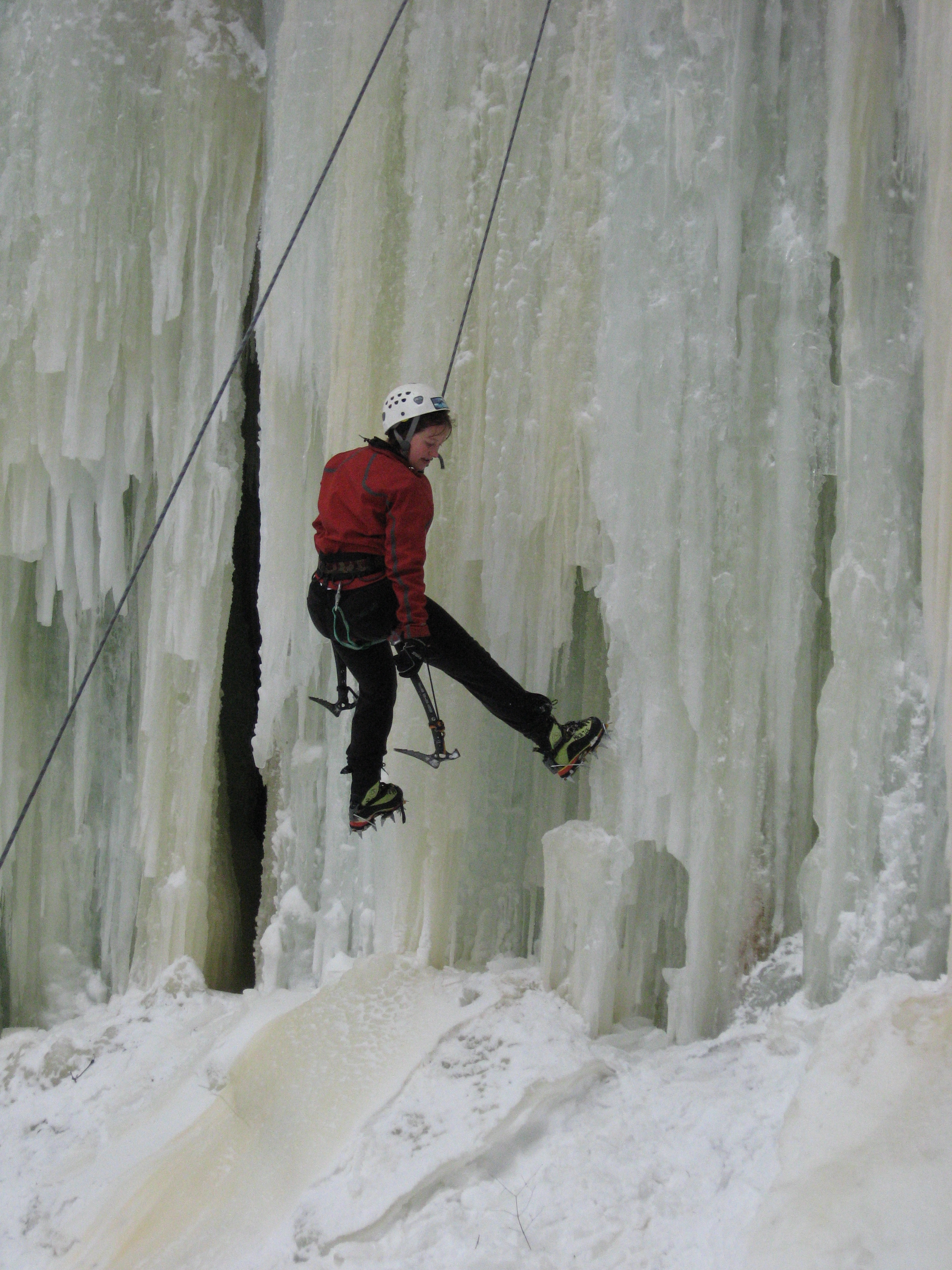 I’m not a climber.

I married into a family of climbers. Ice climbers.

Ice Fest in Munising, Michigan is their annual family event.

In Pictured Rocks State Park along Lake Superior, there are waterfalls. Water cascades over rocks and trees deep in the woods; water bursts over cliffs and pours down into the largest Great Lake; water spurts beside highways. Water falls everywhere, for half the year, anyway. The other half, the water is frozen solid. Delightful, laughing waterfalls become a thirty or fifty-foot wall of solid, unforgiving ice. Or a round pillar of ice. Or a combination of rock and ice, hanging in large downward spires, threatening to jab you in the head as you walk by.

When I had been dating my Yooper boyfriend for six months, he drove me from our home in Chicago up to Ice Fest. I was overwhelmed by the energy: the whole town of Munising overrun by axe-wielding, Frankenstein-boot-kicking, ramped-up climbers. YAAAAAAAH EEEEEHHHHHH???

Early in the morning of the climb, we gathered at Ice Fest headquarters: Sydney’s (a restaurant with an Australian theme, which somehow fits the U.P.). I was terrified that I would fall to my death from fifty feet up, or worse – that I wouldn’t be able to get off the ground at all.

We loaded our gear and tromped downstairs to the waiting van. About 20 miles outside of town, we pulled off to a side road next to a fence with a farmhouse and a barn 100 yards beyond. Everything was white. We hauled out gear and started the trek across a large field of snow to where the trees began. The forest was silent with fresh snow on the branches and ground to muffle all sound. We followed a narrow trail, ascending gradually. My confidence was growing by the minute. This was my element. I loved the outdoors in winter. I loved snow and ice and the cold wind. What had I been so worried about?

After a mile, we emerged onto a cliff before a clearing. One by one we saddled up to the edge to look down over the frozen waterfall. It was a long way. The ropes – one purple, one red – wound around trees at the top near us and dangled over, coiling on the flat, snow-covered floor.

At the bottom, Sue gave us a brief demonstration on the ice, teaching the whole way. Make sure to keep three points on the wall at all times. Use your bigger muscles – your legs.  If you hack away too much and try to pull yourself up by your arms, you’re going to tire yourself out.  She pointed out how our bodies are built differently from guys – our stronger muscles are in our legs – so use them. “Keep your hips close to the wall,” she said, “Push with your bush!”

Without a belayer, she climbed the wall with the grace and exuberance of a kid scrambling up a backyard hill. It looked so easy. We watched and cheered when she got to the top.  Then she climbed down and faced us.  “OK, who’s first?”

“I’ll do it,” I said, and approached Sue’s rope. “There you go,” she said.  I took off the down jacket, put on the helmet, tied into the harness and approached the wall.  “On belay?” I called back.  “Belay on,” she replied. “Climbing,” I said. “Climb on,” she answered.

I inhaled and stepped forward. A few inches from my face, the blue ice smelled clean, like wind. I could hear water trickling inside. Panic rose in my chest. I’m climbing a top rope, I reminded myself.  I’m safe.  I knew this was true.  Even if I climbed up halfway and fell, I would dangle in my harness on the top rope.

“There’s a good foothold on your right,” Sue called to me, “Step up on it.” I looked down and saw a natural formation in the ice that made a small step. I’d imagined the wall would be flat, that I would have to use the picks and the toes of my crampons to dig and kick my way up. But actually, the waterfall was frozen with natural footholds and shelves. I followed Sue’s instructions. “Good,” she said, “Now swing your right axe.”  I did. There was a thunk above my head.  “Now your left axe. Kick in with your left boot.”  I did and found myself in a squatting position, with my right foot resting on ice, both axes in the ice above my head, and the toe of my left crampon firmly in the ice.  I had no idea what to do next.

Against all logic, I put my weight in my legs and stood. My crampons held. And there I was, two feet above the ground, in the ice.

I didn’t get to the top that time. My arms turned to butter about ten feet up. I fell a lot groping up those ten feet, but the rope held. I would replace my crampons and try again. Try again became my mantra that day, and eventually I did make it to the top, to the cheers of my fellow climbers below.

Later that afternoon, we hiked out of the woods in the dusk, pink light glowing across the white field. Back at the hotel, exhausted and exhilarated, we celebrated with warm whiskey and the hotel whirlpool and the satisfaction of having ascended the impossible.

Felicia Schneiderhan used to live on a boat in Lake Michigan. Now she lives on the North Shore of Lake Superior with her husband and three small tsunamis.