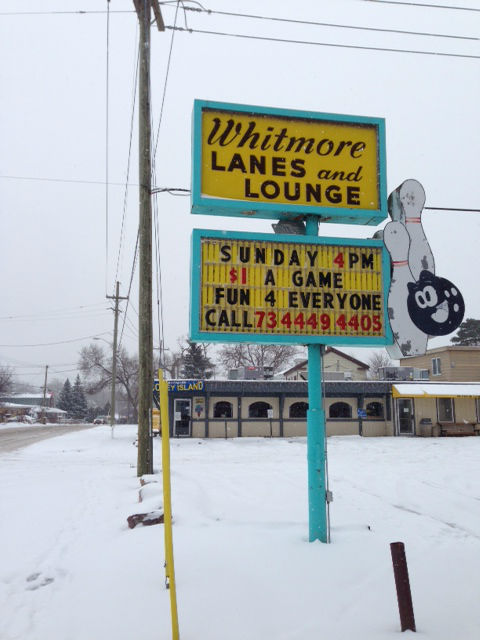 The sign greeting motorists says, “Welcome to Whitmore Lake,” set inside a Bob Ross painting of trees and water. I hear the 1973 township board meeting approving the sign. “We are a resort community. We want people to feel relaxed,” the local leaders said. The township board commissions a local artist who probably taught at the high school and died teaching watercolor techniques to senior citizens.

The MOTEL sign visible from the freeway is in large block letters. The cinder block motel itself looks like the rooms are giant smoke stains inside. I imagine it as a place of desperation and near-murders, though the parking lot is usually full in the summer when people from all around Detroit come to the lake to hop in boats and pop beers. The lake itself down the street is literally where iconic 8-Mile Road ends.

The Whitmore Lanes and Lounge sign along the main drag is yellow with green trim. There’s a bowling ball with a toothy smile and wide cartoon eyes bashing into two pins affixed to a second sign underneath where there is space for changeable announcements. The sentiments switch weekly. “Come out to celebrate Phil and Debbie’s 50th Anniversary on Wednesday!.” “Go Trojans. Good luck against Clinton.” The local high school team mascot is a Trojan. Local businesses hang the red and white school flags in their windows on nights the football team is playing. Condom jokes, of course, are rampant.

The Polly Market sign down Main Street is black cursive on a white background and announces the availability of package liquor. It lights up electric red at night. The store is small and dusty. The produce is a gamble. There are 10-year-old desk organizers for sale. In the winter, many of the people in the store have on thick bib overalls and large boots, including the women. The lake is directly across the street and the ice fisherman come out of their shanties and into the market to buy schnapps, beer and energy drinks. As I was standing in the checkout lane one winter evening, the teenager behind me with a hood on his head and a candy bar in his hand knew the cashier, a woman in her late 50s. As she was tallying up my purchases, she said hi to him and asked him how he was. The teen pulled off his hood and said, “I got jumped last night when my car broke down out by the trailer park.” The teen had cuts above his eyes and bruising on his cheeks. The woman gasped. No one else seemed to take notice. He began telling her the story. It’s that kind of town.