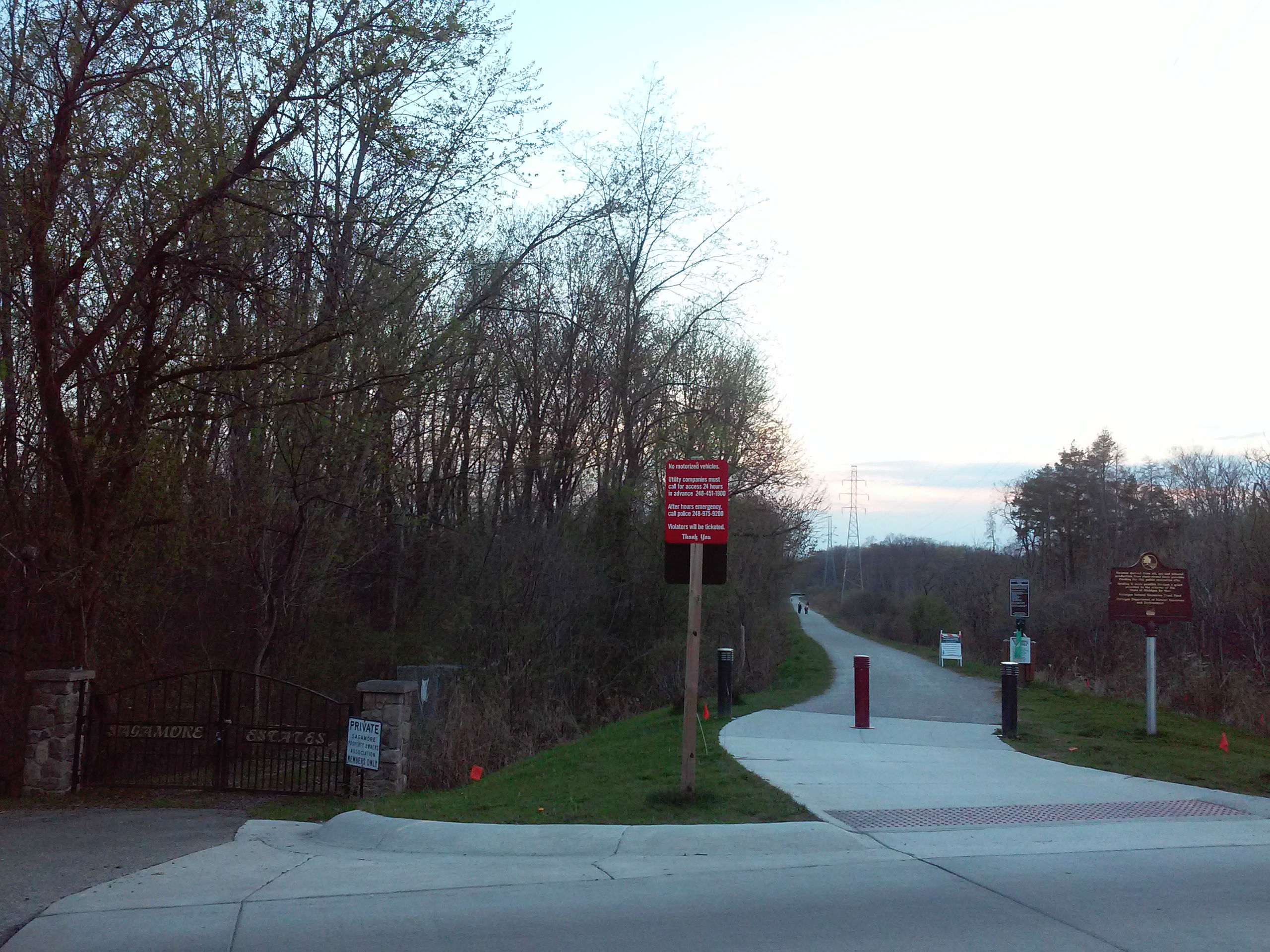 I once saw a West Bloomfield octogenarian pull an umbrella out of her purse and behead the hood ornament on a man’s Cadillac because he took her handicapped parking spot in front of the Deli Unique, and I once saw a red-headed sandhill crane snatch a Choco Taco out of the hand of a weeping child at the Orchard Lake Yacht Club. I don’t believe in fragility.

There’s a gated development right across the road, and I can catch glimpses of the miniature mansions painted in sepia tone through the wall of white privacy fences and wall of white pines. But there’s a gated development on the nature trail, too. The Orchard Lake Blue Heron Preserve, an acre walled off with split-rail fences instructing humans, wildcats, and snowmobiles to STAY OUT to PROTECT THESE FRAGILE BIRDS. This gravel trail used to be a railroad, these flowerbeds covered in coal clinkers. The beige plastic sign made from recycled materials holds the names of aged society mavens who once held silver-plated forks and knives to dissect fresh-caught whitefish and new fingerling potatoes on the Star Clipper Dinner Train that hummed its way along the edge of the western suburbs here twenty years ago. The tracks rusting, the velvet seats and polished oak of the caboose molding, the same women donated wads and wads of cash to dig up the ties and plant flowers between them. I imagine their diamond rings and carnation pink manicures caked with the bold stripes of Kalkaska Sand, patting clumps of near-extinct native flowers in these decorative beds. Tufted Vetch, Toad Trillium, Wild Blue Phlox, names neatly arranged on peeling laminated placards.

Twenty miles away in Hazel Park where my mother grew up, the houses are honest brick boxes that squat on gridded streets, congregating around vast expanses of cultivated green space. Long-dead urban planners laid out places for the children of autoworkers to play, leveling and banishing wild spaces for sledding hills and baseball parks as regimented and flat as a factory floor. Ten miles away in Brightmoor where my father grew up, those same brick boxes crumble into nothing after years of fire and neglect. Nature takes them back, fronds of unknown ferns sprouting from the melted linoleum of an ex-kitchen floor, maple and oak saplings feeding on the carcass of a rusted-out car, wild pheasant sheltering in the shade of half a collapsed wraparound porch.

I could leave these gravel paths and drive down Orchard Lake road, passing frozen yogurt shops and latte joints, gourmet grocers and designer boutiques. I remember this same road twenty years ago when we moved in from Southfield, how we would drive past fields of scrubland where fragile maple trees and sumac fronds were just beginning to sprout from the bare dirt. And then one day they were gone, pubescent forests bulldozed and blonde wooden frames beginning to sprout from the bare dirt. I cried, a nine-year-old in love with unspoiled nature, but the trees weren’t gone forever. Acres of cattails wave between neatly tucked-in suburbs, and every strip mall has a backdrop of verdant oak and tangled vines, guarded by little blue “Protect our Wetlands” signs. Even the smooth concrete walking paths that wend through landscaped subdivisions skirt the edges of precious swamps. I can wander through identically green lawns and I’ll still stumble into little Edens, slices of tree and stream too small for any developer.

Nobody my age really grew up here, save the old families with lakefront property, the stone swimming pools and bay windows I can see glistening from where I hike in the woods. The lakes are Private Access, and I wonder sometimes what it would be like to wake up and look at the water every day, what it would be like to casually dip into something I only see in glimpses from between the trees. To grow up taking the latte shops and nature preserves for granted, instead of seeing them spring up around you; to accept that you live in a world where Coach boutiques and cattail swamps are natural complements to each other, not fervent enemies. Perhaps my parents wanted this for me, this melange of sophistication and environment, instead of the embattled relationship to the wilderness their own landscapes presented them with. Perhaps it’s all about the property values.

Rachel Weisserman graduated from Central Michigan University with a Bachelor's of Science in Creative Writing, somehow. She ran the Spirit Spit Open Mic in the Woodbridge neighborhood of Detroit for a year and a half starting in late 2012, and owns Elmore Leonard's breakfast table.