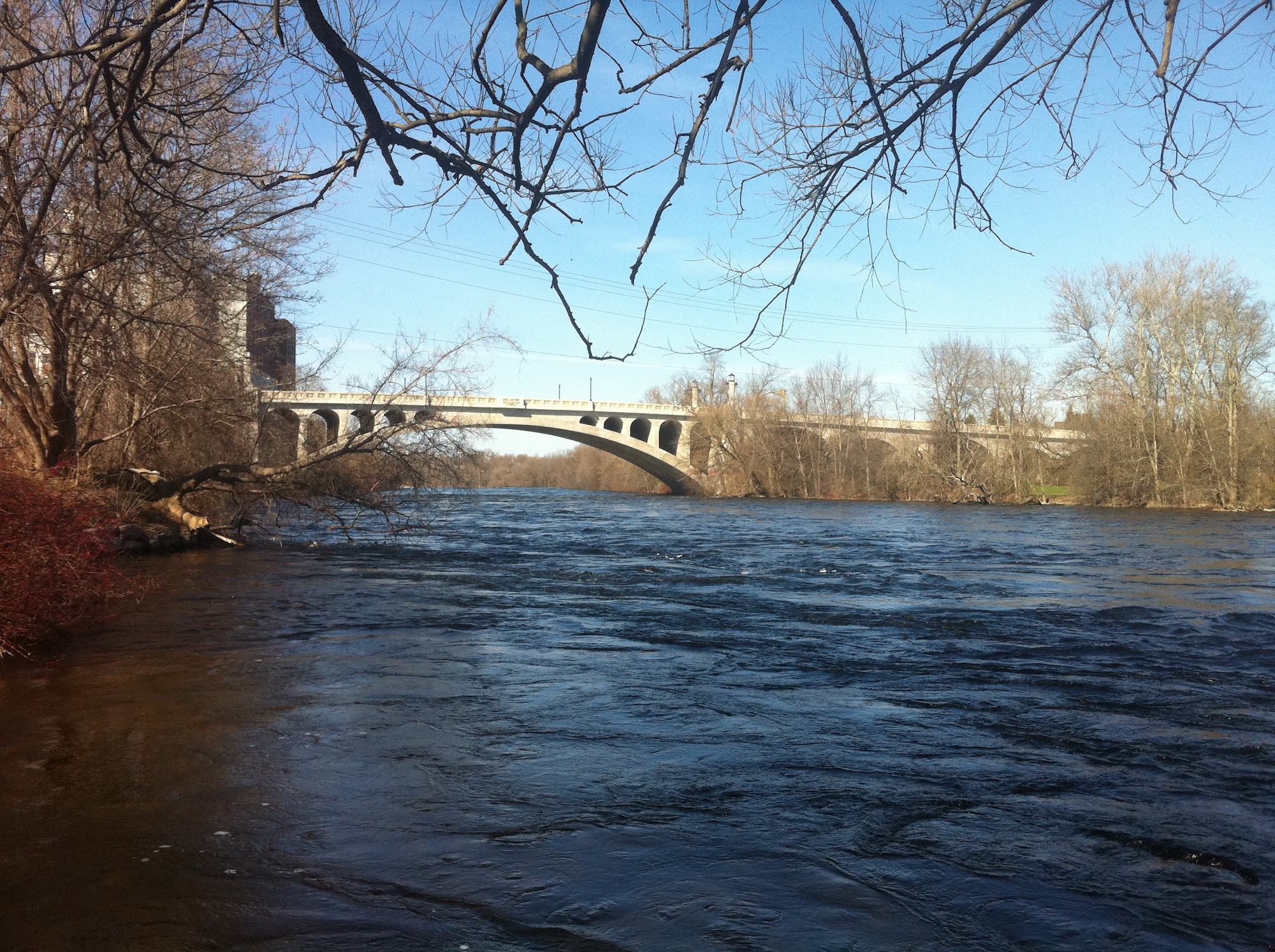 After twenty-four hours by train and two by bus, I arrived in Peterborough, Ontario with two suitcases and a backpack weighted with books, laptop, and clothes. I’d have little more to get me through year one of my PhD. September through May, “home” was a furnished house shared with three other students; I’d rented out my house in Halifax, Nova Scotia and put my belongings in storage. Low commitment, I told myself, in case the PhD didn’t work out.

The landlady’s windowsill knick-knacks were relocated to the dining room so I’d have a better view of the backyard and, just beyond, the creek—one of many crossing Peterborough and feeding the Otonobee River, part of the Trent-Severn Waterway, a suture of switchbacking rivers, lakes and and locks running from Georgian Bay into Lake Ontario. Mornings after heavy rain, waiting for my toast, I’d watch the swollen creek tumble; through the winter, I’d guess how cold it was by how thick the ice looked. In spring, sun-warmed snow broke from the banks and dissolved into the current, flowing south-eastward.

End of May, I did too, returning to Halifax to teach an art history course. Reconnecting with friends and family, I rarely thought of Peterborough—not till late August, when Graduate Studies sent emails reminding me to register, which I did the day after I returned, within hours of the deadline.

My ambivalence was puzzling. For second year, I had a one-bedroom apartment with a front garden, and soon, movers would deliver my things from storage: bed and dresser, sofa, oak table and desk, a couple hundred books, and mementos and photographs of my travels across Canada, the UK and Asia. But unpacking boxes, leafing through books, I felt only brief moments of joy; I couldn’t shake an unsettled, even sad, feeling. I joked with friends that it was “buyer’s regret,” having committed to living in Peterborough and doing the PhD. Once I had a routine, I figured, I’d get over it.

But as the days passed, my ambivalence intensified; I missed Halifax more than during first year. So I tried to be social, hoping to feel connected, that the scales would tip in favour of being here. In this spirit, I went on the Anti-Colonization Walk-About during “DisOrientation Week” in late September.

A small group was already assembled at Confederation Square, the appointed meeting place. Our guide was a member of the Haudenosaunee Confederacy, which had shared this land with the Mississauga before European contact—a fact sometimes overlooked, she noted, by the Mississauga and the government. Both the Haudenosaunee and the Mississauga are Anishinaabe people, whose traditional territories extend in all directions from the Great Lakes. Yet the territorial acknowledgement I’d learned the week before referred only to the Mississauga. I felt a trickle of doubt—not for our guide, but because I’d blindly accepted one version of the story.

Before the walk, our guide led us in ceremony: she placed a lit bundle of sage in a clamshell, wafted the smoke over herself, then passed it around so we could do the same.

We followed her to the edge of the park and a sign describing how “pioneers” had used it as an agricultural fair, then as a cemetery. At the bottom, two sentences acknowledged that remains of “First Nations” people had also been found. We followed her to a grass median in a parking lot and a small boulder with a plaque: “An Anishinaabe lies here. Rest in peace.” Nearby, a larger plaque detailed the life of the settler who’d found the remains. There was no further information about the Anishinaabe.

We followed her downtown. The quaint brick buildings of the main streets now seemed to conceal something, to be on shaky ground that might split open and swallow us up. I felt heavy, as though that boulder was now lodged between my heart and stomach. It was unlike any emotional weight I’d ever experienced—not the garden-variety blues that sometimes settle after several of life’s more trying days, not despair, not even grief. It was embodied—an emotion I was physically carrying.

We stopped along the west bank of the Otonobee. She asked us what we could hear.

The wind in the leaves of the trees overhead.

The constant drone of the ventilation system in the factory to the north.

But not the river.

We followed her to a patch of grass for closing ceremony: fingers dipped into a cup of warm water, then touched to forehead, nose, neck, shoulders, knees, and ankles. Our guide’s brother used a feather to “sweep death” from our eyes and ears. It was an oddly intimate gesture, and I wasn’t sure I believed it would work. But opening my eyes, seeing his smile, the lightness of joy replaced the gravity, the lassitude, of that boulder.

Back at my apartment, porch festooned with the vines of ripening beans, a hint of the boulder’s lug returned. Unlocking the door, I was grateful for a quiet place to process the afternoon’s experiences, but more aware than ever that this was not my home, just a temporary place to be.

Three blocks eastward, the Otonobee River flowed on, as it had long before 1615, when Samuel de Champlain conscripted the Anishinaabe, whose knowledge he used to define and delimit the land and the waterways between Georgian Bay and Lake Ontario, and beyond.

Three blocks eastward, the Otonobee River flowed on, as it will long after I’ve completed the PhD and found another, probably temporary, place to be.

In the meantime, reconciliation: of my feelings of ambivalence about staying for two more years in Nogojiwanong—the Anishinaabe word for Peterborough, meaning “place at the end of rapids”—and through becoming an anti-colonizing settler ally, wherever I am.

Jane Affleck is a writer, part-time instructor at NSCAD University in Halifax, Nova Scotia, and PhD candidate in the Cultural Studies program at Trent University, in Peterborough, Ontario. Her writing (short stories, feature articles and exhibition reviews) has appeared in several Canadian arts and culture magazines, including C Magazine, a quarterly publication devoted to international contemporary art. Her Peterborough “bucket list” (to do before completing the PhD and leaving town) includes visiting the Canadian Canoe Museum and, after a couple of lessons, venturing along the Otonobee River in a canoe.