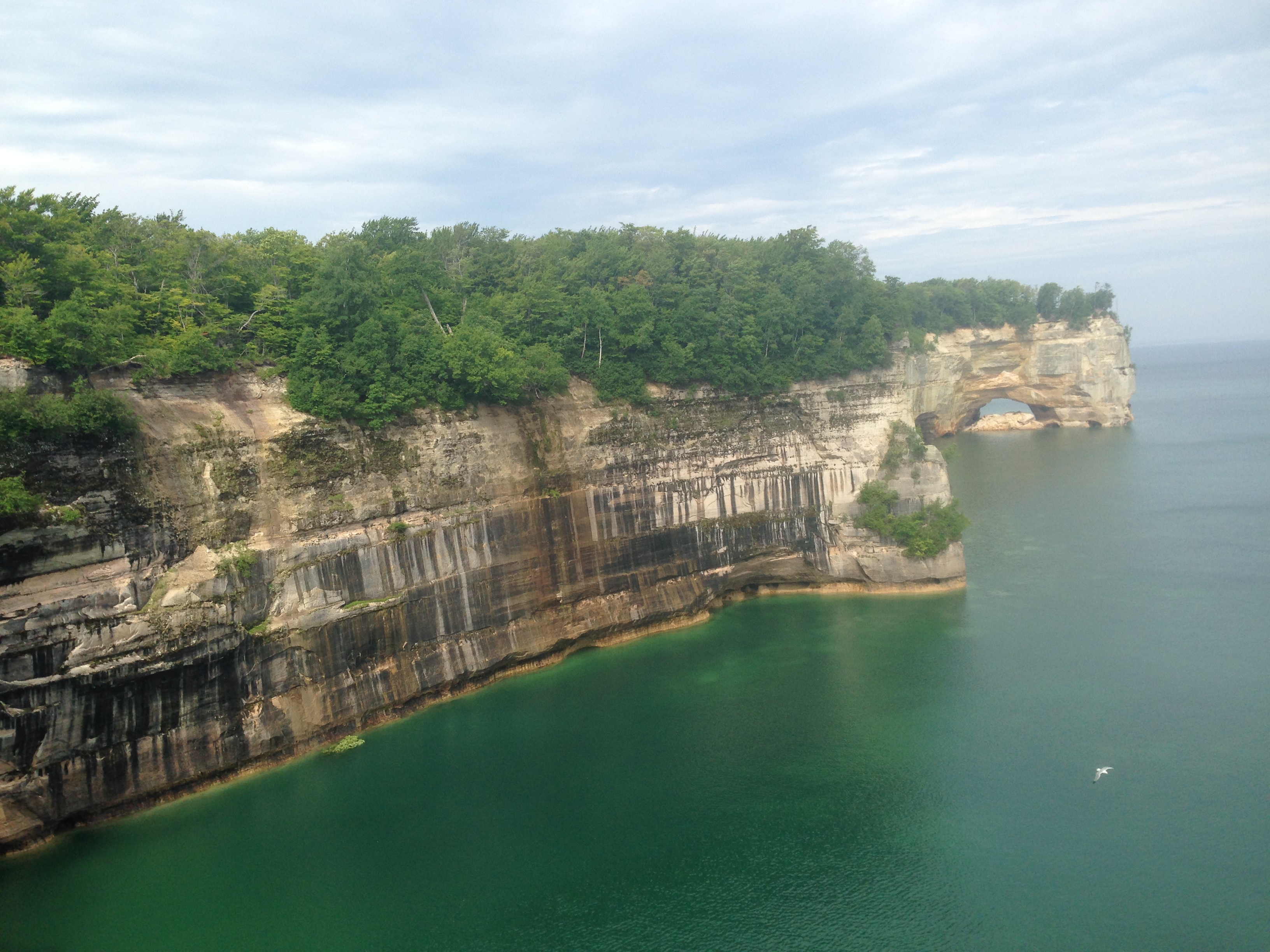 “If I wasn’t absolutely positive the fall would kill me, I would so fucking jump right now. Oh Christ, I’m talking to myself.”

The truth is I’ve already been talking with no one else around to listen for the better part of five hours. I’ve just finally verbalized it and confirmed to myself that I am, in fact, talking to myself. The madness of summer heat combined with — I don’t even know at this point, maybe like seven or eight miles of walking through a forest alone — leads one to forget the social norms that somehow exist out in the world of concrete and aluminum siding. I am standing, dripping with sweat looking out at the tip of Grand Island jutting up from the endless blue of Lake Superior. Below me, the most inviting waters. I know they are cold. Bluer than the eyes of a girl at the end of the bar who is so pretty you’re afraid to hit on her. Those waters are so clean I could open my mouth and happily drown myself trying to drink the great lake dry.

But, those purifying and welcoming waters are also more than 200 feet below me. And, as much as I hate myself for setting off on this trek — Munising Falls to Chapel Beach and back, 32 miles in two days — I’m not quite ready to die.

The trees wrap around me in the great forest that probably stretches forever southward, as far as I’m concerned. The uninterrupted wilderness of Michigan’s Upper Peninsula, the suffocating green forests that stretches from Copper Harbor to Manistique and Escanaba. And here I am, still another nine long miles from the great comfort of the driver’s seat of a Ford Focus, with a great land surrounding me on on all sides. Yes, I am contemplating a comfortable suicide, but I am home.

Michigan’s Upper Peninsula is a world away from everything. What people call Up North, the area between, say, U.S. 10 and the Mackinac Bridge, is, for the most part, a tourist’s playground. There are a few spots to escape mankind in the summer, but you’re as likely to find a world-renowned brewery up here as you are to find peace and quiet during the latter half of June. The most northern portions of the Lower Peninsula, save for a few spots in Leelanau and the majestic beauty of the Straits, is a lot like the 2005 Detroit Pistons: Underrated so much that it’s overrated. You’ll never have a hard time finding a McDonald’s in those areas, for instance. Every 20 miles or so on Interstate 75, you’ll come to a fairly good sized town where you’ll find actual residents. Hell, you can access most of the area by a damn interstate.

Cruising through the upper reaches of the Lower Peninsula as twilight slowly descends on the rolling hills, I barely have time for all these summer hamlets with their downstate residents making their way to weekend cottages. The sight of the Mackinac Bridge — Mighty Mac standing tall against the elements season after season — peeking through a gap in the hills caused by that concrete river that took me northward, ever northward, makes my heart leap. As my trusty Focus rolls up to the bridge, I throw off the restraints of cliche and find “Free Bird” on Spotify. Fuck it, man. It’s time.

As you cross the bridge, getting closer and closer to St. Ignace, you see a sign getting clearer: “Michigan’s Upper Peninsula.” The sun is setting on the Straits of Mackinac and I am doing my best to take in the view, but that sign makes my chest warm and makes me smile wide. The towering forest along the coast stretches back to the interior and it feels like you’re opening the door and walking into the welcoming arms of a lover.

I pull up to the toll booth, turning down the wailing solo, and am struck by the beautiful Native American man working that Thursday night. I hand him a twenty and hear him mumble something.

“I’m sorry, what was that?” I ask, leaning out the window.

He looks up at me and grins. “Welcome back, young man.”

Chills shoot down my spine and I don’t find the words to reply. I want to tell him it’s good to be home. I want to tell him how I’ve missed this empty place. Instead, I drive off into the majestic embrace of U.S. 2. The northern coast of Lake Michigan unwinds in front of me, all sandy beaches separated from the darkened forest by a simple two-lane highway. My goal is a campground 30 minutes west, where I manage to beat the sun, the bugs and the nagging fear that inevitably comes with being all alone in a great forest, to watch the sun dip behind the trees and drop gracefully into the deep lake.

I wake up to sunlight pouring into my tent and mosquitos parked on top of it. Also on the sides of it. Really, just about anywhere but inside of it. I’d convinced myself they wouldn’t be so bad, but what the hell do I know. In 20 minutes, I’m changed, packed and driving west again heading back to a place where I felt I was reborn into this world. Pictured Rocks, the stretch of Lake Superior coastline between Munising and Grand Marais, was my first thru-hike, 47 miles of forest, beach and stunning cliffs. Hiking was a hobby in the months before that trip, and afterward became a passion. Michigan was a place to escape before I walked those four days. It was a place to love in the years since.

One might pray for a coffee shop while driving in the Upper Peninsula’s interior, but all you’ll find are lonely gas stations in one-stop-light “towns.” Sometimes, you just have to make due with some beef jerky and an energy drink before walking 16 miles, but the crisp northern Michigan morning made up for any lack of food or drink. By the time I park at the trailhead in Munising Falls, I feel like a horse in the starting gates waiting for the sound of a gun.

At a pace that can comfortably called “Death March,” I blitz through the first eight miles, arriving by lunchtime at Miner’s Castle, which I’m sure is beautiful when it’s not full of fat people eating lunch. This is where their trip into one of Michigan’s most beautiful landscapes would end. Me? I have a date with the cliffs.

A few more miles later, and I realize I am minutes from what I’ve been longing for. The first sight of the grand lake hundreds of feet below you steals the wind from your chest. The trail bends around some trees and, quite suddenly, the only thing between you and Lake Superior’s icy blue waters is three steps and Michigan air. The sandstone cliffs jut in and out, never sheer, the erosion wearing lines in the rock like smiles do to a beautiful woman’s face. The base of the tan rock widens at the water line, the outline clear in the shimmering water. Some trees lean out over the chasm, their leaves gently slapping the cliff face.

The mosquitoes swarm and the promise of more beckons. Along the next five miles or so of trail, there will be a hundred such overlooks, every turn in the trail bringing a new point from which to ogle Michigan’s great rack. Every now and then, the blanket of the forest envelops the trail again only to spit you out onto a lonely beach a hundred feet above the lake where the water is invisible and only the horizon is there to greet you. I’d happily live on those beaches enduring whatever nature could throw at me.

But the summer heat holds me and is starting to wring me dry. My clothes are damp, my feet hurt and my eyes long for the sight of a tree growing out of a rock outcropping with the center somehow  — as if by cannon blast and missing. When I reach it, the sand of Chapel Beach is comforting and the lake is calm, but the swarms of infernal mosquitoes seem destined to ruin this fine dinner of re-hydrated chicken fajitas. The tent becomes home and I fall asleep listening to the blustery winds whipping through the trees.

I wake the next morning knowing I would soon face one of the sternest tests of my life. Another 16 mile walk back to the car awaited me and I curse my decision making.

“Why the hell didn’t you just park at Miner’s Castle and save yourself 16 miles?” I ask, starting the soon-to-be-troublesome habit of speaking to myself while alone on the trail.

In short order, my crippling fear of heights was washed away by the slightly dehydrated and completely fatigued urge to float on my back in the ice-cold lake. Within the first hour  — a relatively straight forward hike to Mosquito Beach  — I begin thinking there is, in fact, a difference between things you can do and things you should do.

But, there is no where else to go. And nothing else to do. So, I keep walking.

Apparently, the wind in this stretch of the southern Lake Superior coastline has Saturdays off. The sun rises high in the sky and the wind barely ruffles the leaves of the ancient trees that thankfully provide me shade. The heat falls on me. My mind grows tired, which always means my thoughts speed up. My mind is like the rapids of a river, moving fast but incredibly shallow. I lose myself in the drumbeat of my feet, moving ever onward.

It is a short time before Miner’s Beach, a sandy portion of the trail unprotected from the sun’s rays, when I stand over the beautiful cliffs and contemplate jumping. The greens of the trees contrast with the yellows of the sandstone; the reds, blacks, blues and greens of the minerals bleeding out inside the cliff face give the appearance of a master tossing paint on the earthen canvas. I pant like a dog, desperate for cool water and a respite from the June sweat.

“God it looks so good,” I say to myself, apparently no longer concerned with the two-way, one-person conversation.

The blue of Lake Superior, from that spot, can almost reach up and grab you. The depths of the freshwater sea are unfathomable. You stare at it and wonder who’s gone to rest there forever, what lives has she claimed and would it really be so bad if she claimed yours?

“I mean, what if you didn’t die? What if it was just really cold and nice?”

“Well, then how the hell would you get back? Are you going to flag down a tour boat? You’re sure as hell not swimming to Munising.”

“Yeah, and I’d lose my pack and all that too. If I lived and managed to get back to Munising, I’d have to come all the way out here and get it.”

“Exactly. Not worth it, man. Keep walking. Keep talking.”

And so I did. All the way back to Munising Falls, once again not bothering to take the side trail to see the actual waterfall because I was too exhausted, too ready to drink a Gatorade and get into sweatpants. Time goes by, but some things never change. The minute my boots hit the pavement and my eyes saw the Focus, waiting patiently as any good horse does, a smile crept across my face. I looked back into the forest – the place that tried to steal my breath away from me, the place that wrang me dry of damn near every drop of water in my body, the home of a place that pictures can’t do justice – and I missed it immediately.

Kyle Feldscher is a reporter and writer in Ann Arbor, Michigan.