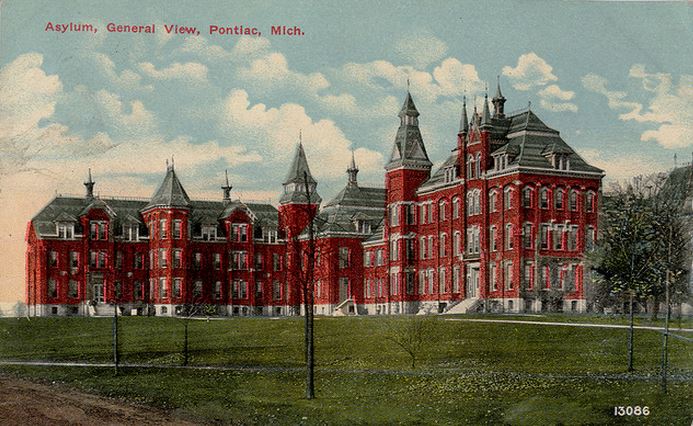 Summit Place was my childhood mall. My step-dad would buy my mom jewelry for special occasions at the Hudson’s there. Several tape shops turned into CD shops then went out of business. A decade later those same spaces were occupied by non-chain garment places that smelled of incense and sold patchwork leather coats and “South Park” T-shirts. Hudson’s was bought out by Macy’s, Builder’s Square went out of business and a Steve & Barry’s moved in nearby then went again. There was a Media Play (R.I.P.). There was a Mervyn’s (also R.I.P.).

A block down Elizabeth Lake Road was the Pontiac State Hospital, a big sprawling campus with a long, spooky history of housing mental patients and others swept out of public sight. The two places are linked, in my mind anyway, and not just in the offhand way shoppers might remark that the mall was also crazy.

Part of the hospital had been a TB wing. There was a sanatorium where my Great Aunt Cleo worked as a young nurse tending what were then called Mongoloid children on screened-in porches. I’m sure there were polio patients and iron lung machines. My mom took a class in college that required she spend a semester assisting or observing there. She says even when parts of the hospital were still open it was eerie. We took an unofficial tour of the place in 1997 or so, led by a former employee. Another aunt of mine, who arranged that first tour, had someone take a photo of her in one of the freezer drawers of the morgue. I remember being shocked at the big metal pans in which the bodies were stored, no different in size from the cookie pans my great grandma used, both with a substantial upturned lip all around the edges to curb overflow of batter, or, you know…

Basement tunnels connected different buildings on the grounds. Some of the tunnels had wall shackles where patients were apparently restrained. There were even tunnels, we learned, that went all the way under the major cross street and connected the hospital to the mall. 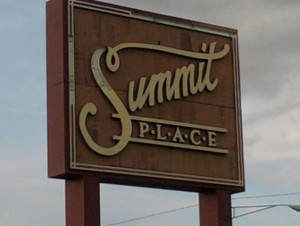 One shutdown wing had been redecorated to film a low-budget horror movie. Black and white spirals were painted on the walls of one large room, but that area was nothing compared to the patients’ rooms that had been left untouched. Sometimes a room would contain a single, spooky shoe. Or a plastic bedpan. Or a stack of dingy twin mattresses. In one bedroom someone tacked up lots of pictures of tigers and other predators clipped from National Geographics. There was smeary pencil scrawl all over the walls, too. Whole cabinets of patients’ file folders had been dumped, by trespassers I assume, in one commons area.

I don’t have the history of the place, only a few sentences of family lore and my impressions from snooping around at the hospital a couple of times. There had been a work farm, though I’m not sure what they grew, but several barn structures and rusted tractor equipment littered the acres of overgrown yard. There was a building of medical storage, containing equipment and glass specimen jars.

Who knows how many Oakland County residents have personal history with the place, how many of them gave up a child they didn’t know how to take care of, or were admitted for while they let themselves dry out or cool down or die forgotten.

Later in her life Great Aunt Cleo the nurse was admitted as a patient, after working there for I don’t know how long. And when the state stopped funding such hospitals a lot of the patients were sent to temporary housing without long term plans. In essence they were set free. In Chicago the joke is that when the state of Illinois did something similar, the mental patients took to public transit.

In high school, when there were friends with cars, we explored the grounds a few times with flashlights and big, bulky VHS camcorders. Most often, we hit the shambling mall to peruse the discount bins at Suncoast Video, to eat in the food court and visit with friends who worked throughout the mall after school. And there would be Aunt Cleo.

I knew her when I was a little kid, not so much later. She had lived with my great grandma, but then she died.  After a schizoid episode, Aunt Cleo moved to a home nearby where apparently she had the freedom to roam. I’d see her wandering the mall alone, looking blank. Once I approached her and introduced myself, not that I especially wanted to, but it seemed the responsible thing to do. I had no technique, no understanding of her situation and we hadn’t seen each other in so long I just confused her. I went back to my pack of friends dejected.

But there was more to the Summit Place Mall. I also saw one of my first movies in the “Cinema I II III.” I had a tire replaced on my first car, a handed-down Pontiac 6000, in the Sears Auto. They had the first Olga’s gyro stand I’ve ever been to and later there was an Auntie Anne’s pretzel stand that ignited a lifelong obsession.

I used to see Aunt Cleo there. Who knows how many random people I packed into cars with to visit that mall, people I remember fondly, or with a rush of icky teenaged feelings. But Cleo was distinct. She knew both worlds, the one of shopping and the more ominous one across the street. And she didn’t remember me at all.

Meredith Counts, a graduate of Columbia College Chicago, lives and writes in Michigan. She's editing a posthumous collection of poetry by Detroiter Jim Gustafson, her uncle. Her writing appears online at Ms. Fit  and Hypertext.