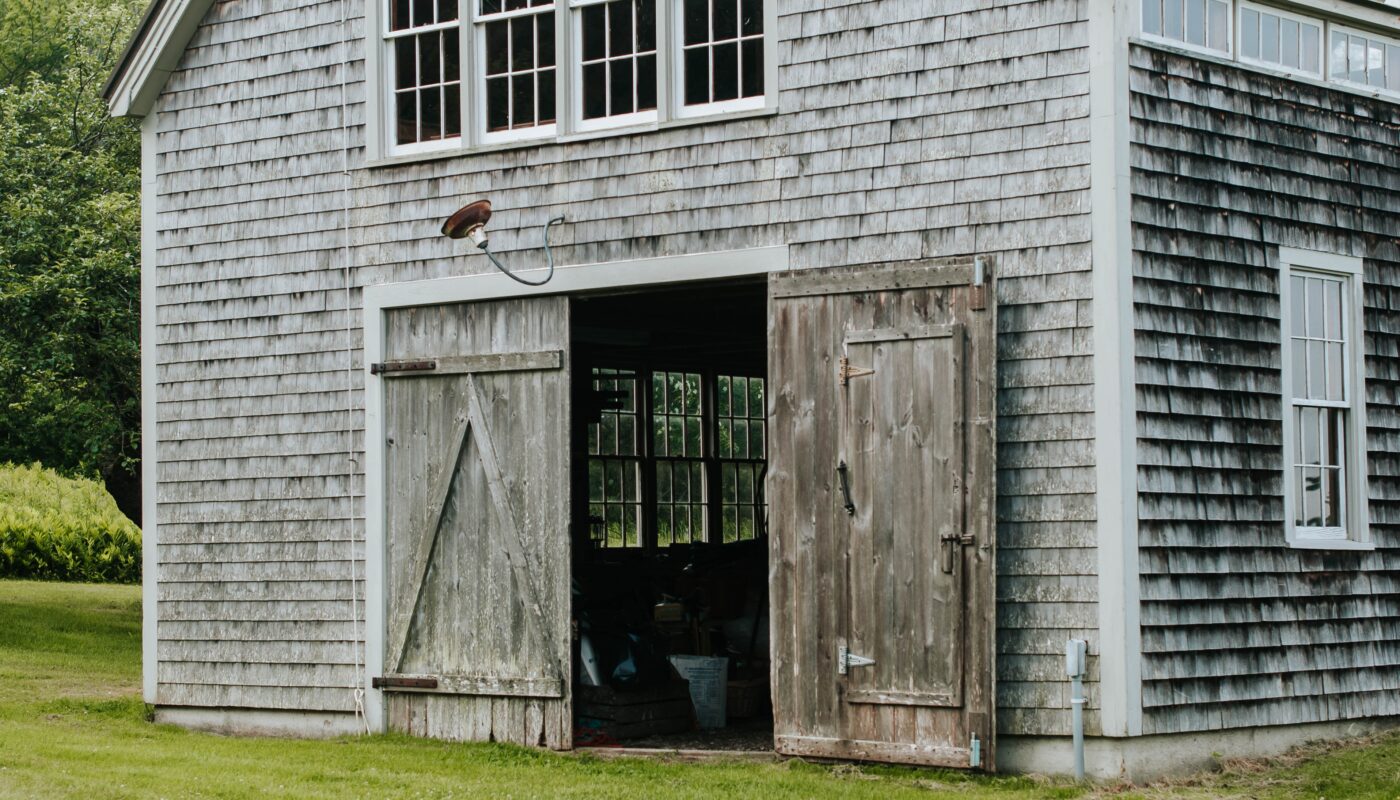 Glen nodded. Dale prided himself on remembering names. They were northwest of the Flambeau Ridge where it dropped in three ledges toward the river. As the cruiser crested Tower Road, the men could look past the river all the way to the national forest.

“What did Jerry say?” Glen asked.

“That nobody had got the mail from the box. Jackewicz always got his mail.”

“Just him. He stayed to take care of his parents. They’re gone ten, twelve years.”

From Tower Road, Glen turned west on an unnamed road that topped the middle ledge. Along it were farms one after another. The Jackewicz place was the third. Dale pointed toward it with his pipe stem.

“Place looks good,” Glen said. The house was painted, barn too. The patch of lawn from house to road was mowed.

“Not really. Park up by the house.”

Dale opened his door and climbed out. Glen did the same.

It was very quiet. Glen stared at the barn as Dale went to the house door and rapped on it. While they waited for an answer, Glen continued to strain his ears.

“Think he drove off?” Glen asked.

Dale pointed toward a pickup truck parked near a shed. “That’s his only vehicle.” Dale tried the door. It was unlocked. Glen followed him in. Neither spoke. The place felt empty, they both sensed, but they did not comment. The porch they stepped in was redolent of barn, and boots. Beyond, the kitchen linoleum was worn but clean. Sink empty. There were gauzy curtains at the window above the kitchen sink and they billowed inward at some light breeze. It was enough to make Glen look to the floor.

“Here,” he said, and stooped to pick up a piece of paper. He handed it to Dale.

Dale fished his reading glasses out and read carefully. “It’s a note,” he said, and handed it back. Glen read a few lines of cursive. “‘I am tired. Bury me next to my folks.’”

“Doesn’t matter,” Dale said. He folded the paper up and put it with his glasses. “I’ll look upstairs.”

There wasn’t much in the house. Glen saw that at once. They’d entered from the barn side, through a small porch that stunk of cattle. He stepped over boots, past a nail-studded wall that held jackets and caps. Barn clothes, he thought.

The kitchen had a linoleum floor with a worn, blackened trail that went from the porch door to the sink. Another worn path to the stove. Lodged against a wall was a small table, a card table. Two chairs. Nothing on the table. A few jars on the counter and a coffeepot on the stove. No clocks, calendars, or pictures on the wall. Glen stepped into the living room. One overstuffed chair. One sofa. A large radio on an end table.

He met Dale in the kitchen, who shook his head. The men went outside.

“I wonder where the dog is,” Dale said, “Queenie.”

“A big kind. Looks you right in the eye.”

Beyond the house were a sway-backed barn and a few sheds. The barn had its doors open and a handful of cattle were beyond it in the shade of a grove of trees. Young cattle, by the size of them. Two-year-olds. The men looked into the barn. What manure was lodged in the corners of the barn was dry and any hay remaining was dusty and old. As Glen walked, he collided with cobwebs.

“Nothing,” Dale said, and backed out.

They walked toward the near shed, which had a tractor parked in its doorway. Both men started when, from the shadow of the tractor, a large dog climbed to its feet.

“Whoa,” Dale said. He set a hand on his pistol. “Stand still,” he said to Glen, who was backing away. Glen froze.

The dog stepped into the sunlight. It was, as Dale had said, a big dog, brown with a black head and neck. On all fours it easily rose to Glen’s waist.

At her name, the dog regarded Glen. Her eyes held his and he saw an alertness in the dog’s brown eyes. More curiosity than hostile wariness. Glen held a hand toward the dog, palm down. The dog’s mouth opened and she panted a little. She sat.

“Good girl,” Glen said. He looked to Dale and saw that he was looking deeper into the shed. In the gloom, Glen made out a shape.

The dog remained sitting and the men stared at the body. Up in the rafters, pigeons cooed. Glen could hear the dog panting. A caw of a crow outside.

“How you want to do this?” Glen asked.

“You keep an eye on the dog,” said Dale. “I’m going to check on Jimmy.” He kept his hand at his belt and slow-stepped deeper into the shed. The dog turned away from Glen to watch Dale.

“Easy, Queenie,” Glen said. “Good dog.” He saw a coil of rope close at hand, draped over a wooden rail. The rope was covered in dust and hay chaff but looked strong. Maybe strong enough to hold the dog. He made a step toward the rope and watched Queenie swing her head to look at him. She was still panting, so he continued moving. Lifted the rope and, using both hands, shook a few loops free. He continued to move, no hurry, and then stood next to the dog. She watched him and he put one hand out to pat her head. She closed her eyes at this and he slid his hand down to grip her collar. “Good girl,” he said, and slid the rope bight through her collar. Made a few hitches, nothing complicated, and stepped away to tie the rope off.

“I think the Hudaks got a phone. Coupla miles toward Anson.”

“You go ahead. I’ll wait here,” Glen said. He stood near the dog and heard the cruiser’s engine start, then the crunch of gravel as it went away. In a few minutes, he untied the dog. She stepped toward where Jimmy hung and so Glen followed.

She lay down near Jimmy. Glen approached. He’d been hanging awhile. To the left of his feet, a stepladder lay on its side. The rope was newer than the one he’d used to hold the dog. Glen deliberately chose not to look at Jimmy’s face.

He looked around. Part of the shed was a wooden slatted corn crib. It was empty. Most of the shed was taken by vehicles and machinery. A seed drill on steel wheels. Bright red Farmall tractor. A car covered by a canvas tarp and what looked like a buggy, also under a tarp. A wooden bench covered in tools and cans, an inflated inner tube.

He saw feathers on the ground beneath Jimmy. Black feathers, a crow or blackbird. He puzzled on them and shifted his eyes to where Queenie lay. It came to him.

“Come on, girl,” he said and walked out. She followed him as he went to the house and found a washpan. Pumped water and filled the washpan. When he set it down, the dog approached it and began to drink. As Glen watched, the dog drank and drank and drank, lapping a prodigious amount of water before stopping. The dog stopped to regard Glen’s face with a quiet watchfulness. Then she trotted across the yard to near the barn. Glen watched as the dog arched her back and defecated. She was there a long time.

When the dog had returned to lie near Jimmy’s sinister shadow, Glen walked to the barn. The dog had shat an enormous pile, more than he had ever seen from a dog. He found a pitchfork and covered the pile with dirt. Then he went to the barn, found a milk can, and set it against the barn wall. The sun felt good on him as he sat on the tipped-back can, the barn wall against his back. The dog was at the corner of his eye and he waited.

When Dale returned, the cruiser was followed by an ambulance. Glen had seen the dust of them coming, had risen from the milk can to tie the dog to a post. Then he waved the ambulance over and had it back to the shed.

“I talked to Doc Everson,” Dale said. “He’s got an operation today and can’t get here. But he says it’s okay to cut the man down. He’ll do an autopsy tomorrow or the next day.”

Glen righted the stepladder and went up. He looked down at the dog, who sat and watched them. The hospital orderlies who manned the ambulance were young men, one of whom Glen had seen before. They nodded to him and pulled a gurney from the ambulance. They held Jimmy’s legs as Glen sawed at the rope. He fell like he was a tree limb shattered by a storm. Glen came down. The orderlies laid him onto the gurney and one of them looked at Dale.

“Yeah, go ahead,” he answered, and they removed the rope from Jimmy’s neck. It lay alongside the body like it was measuring him for a fit. Then they pulled the sheet over and tucked it in. With easy practice, they loaded the gurney and closed the doors. Glen saw the dog stand while Jimmy’s body was being moved, and lean into the rope as he was put into the ambulance. She remained standing as the ambulance drove away.

Glen looked at the cut rope hanging from a timber. He climbed the stepladder once more and cut the rope free. He tossed it aside and came down. Set the ladder by the workbench.

“Well?” Dale said. He nodded at the dog.

“Helluva thing,” Glen said. “I gave her some water. I think she sat here with Jimmy the whole time he was hanging.”

“Yeah. She drank a ton of water and then shit the biggest shit I’ve ever seen. She must have been holding it.”

“Then there are the birds.”

“Crows.” Glen pointed at the feathers. “I think she was keeping the birds off him. Nothing had got at his eyes. I think she caught one of the crows.”

Dale nodded. “Could be. But what can be done with her? Give her to the sister?” His eyes slid sideways. “Or shoot her?”

“Good. Let’s take her with us to town. Break the news to the sister. See what happens.”

Queenie went docilely into the back seat of the cruiser. She sniffed at the seat and then lay down. After a few miles she sat and looked forward at Glen. In the rearview mirror her profile was that of a thick-necked miscreant.

“Hope nobody sees us,” Dale said. “Rumors’ll be we arrested somebody.”

“Hmmf.” Carmichael was a thief, drunk, and general son of a bitch. “Maybe we could sic the dog on him. Chew him over just a little.”

“Be a good reason to keep the dog,” Dale said. “For chewing on sons of bitches.”

Travis Stephens is a tugboat captain who resides with his family in California. A graduate of University of Wisconsin-Eau Claire, his recent credits include Waxing & Waning, 2River, Sheila-Na-Gig, Griffel, 101 Words, and The Dead Mule School of Southern Literature.