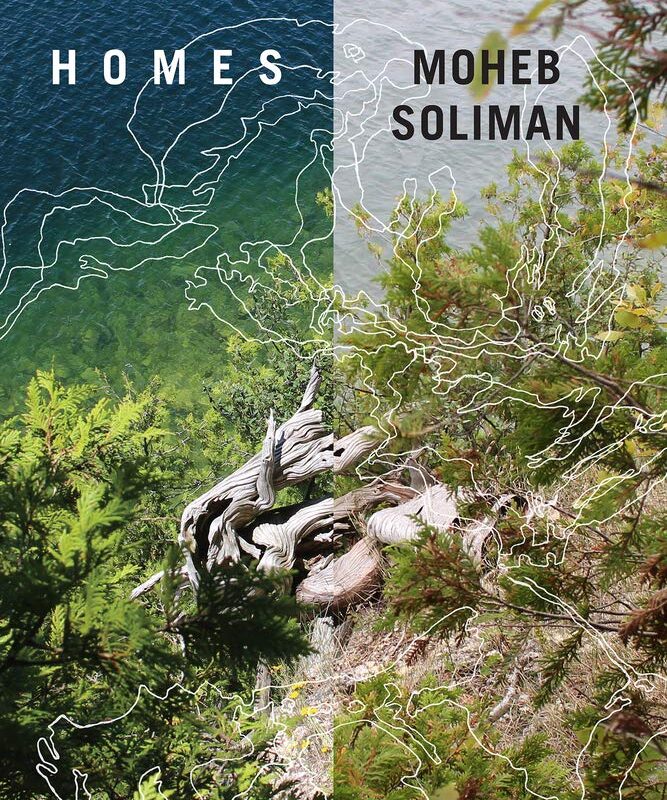 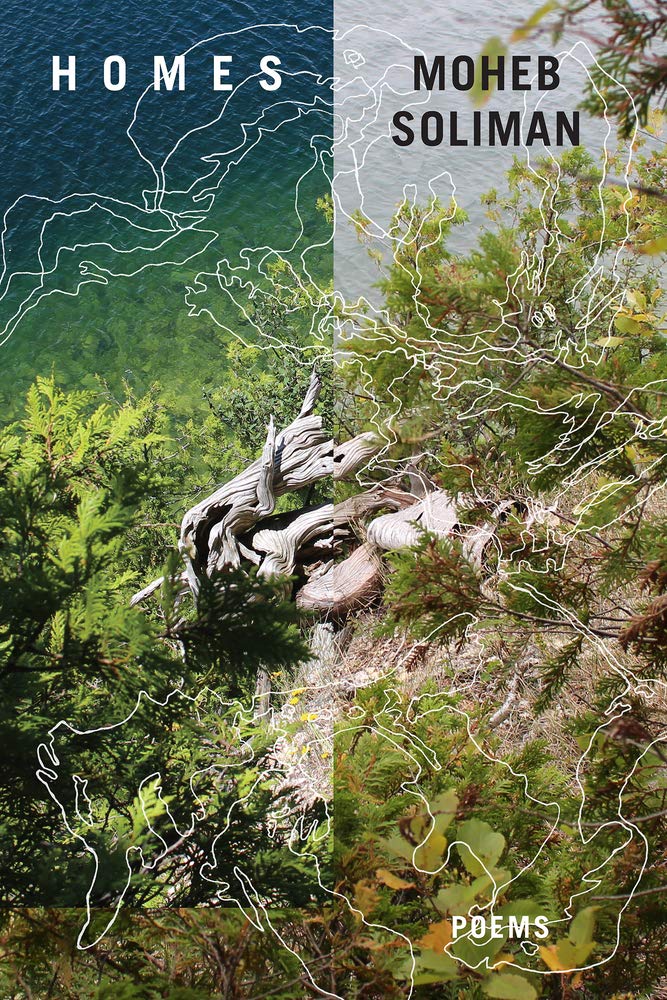 In HOMES, a portrait of the Great Lakes is sketched and its terrain remapped as a site of sanctuary and estrangement in an increasingly bordered world. The debut collection from interdisciplinary artist and writer Moheb Soliman is an archival tribute to a voyage circumventing the Lakes, on its surface a travelogue that explores interiority against the backdrop of this Midwestern ecosystem.

The book spirals around its concerns and tensions, making a record of their ups and downs as emotional triggers vibrating through a life. Linearity is suggested but never proven—the bell curves average out a trajectory with exponential slowing that occurs from start to finish.

The majority of poems assume a block form with justified margins on each side. Visually, it suggests a frame within a frame, the inlaid page as artifact within the physical page of the object. This form is importantly broken throughout the book.

With no table of contents, the collection lends itself to the conceit of a notebook early on; reading the first several pages is as disorienting as leafing through another’s diary, skimming handwriting you can’t quite make out.

The first and by far shortest poem, alluding to “when this all started,” consists of a few “jots” describing Lake Ontario as “half-naked … slipping off its jersey.” From there, the poems begin to explore specific experiences of travel, tourism, and camping, interspersed with observations of the environment—beaches, bodies of water, woods—and speculation over the forces of nature.

There’s a general absence of spatial grounding; unclear actors muddle the narrative, as figures of a spouse and children come and go; external bits of dialogue and signage split and refract the internal monologue. We move quickly, from sentences and phrases, sometimes marked with capitalization or punctuation (though never periods), to isolated words and fleeting images: “Algae break       water       webs of puce    the shoreline lipstick left by the lake on lovesick miles of napkin good-bye.”

The writing throughout is heavily fragmented in this style. Complete thoughts and structures are suggested but rarely notated. There are truncations, abbreviations, a redundancy of information that all evoke a furious, stream-of-conscious notetaking style—the fiercely internal sensibility amounts to something more like notes to self. Each page of the journal tenses and flexes with coherence, alternating very dense and very sparse lines.

The ideas conveyed in half-completed sentences and semi-connected progressions have the exact, uncanny, and (im)precise logic of fleeting thoughts. Poem after poem, these moments become a nod to shorthand in their rendering, and the resulting un-grammaticism is preserved as a testimony to its speed, mistakes being truer to the intent than polished revision:

With caesura functioning almost word to word, the writing has no loyalty to syntax. Phrases are broken apart, and often, beautiful and evocative double readings are created. Soliman employs a kind of “hinge phrase” that seamlessly concludes one thought and begins another while satisfying neither—a reader may better understand the gesture between them than the meaning. A true merit of the work is that the unclear syntax does not stunt interpretation but invites it, sometimes as a fill-in-the-blank, and deftly builds momentum over time to make even more sense. It’s obscuring, but never so heavy-handed that it’s confusing.

At this granular level, the writing itself explores the concept of the “gap,” as both a formal poetic technique and a topographical quality of water that separates us, that we seek to cross.

Despite this slant toward disorientation, there’s an undercurrent that pulls the reader through—the speaker’s expressed desire for change, or to become changed. These moments briefly reveal the emotional life beneath variably concrete and abstract depictions. It’s simply how he perceives the landscape, and his field notes betray him:

To this end, there’s recurrent mention of twos, of things split into parts. This kicks up mid-book: “see for me / the world is two, two / land and water / shallow and possible,” the speaker notes, during a lesson in the region’s prehistory, where “not even algae was invasive” and “[e]verywhere was a sort of water-Pangaea, a lake somehow floating invisibly in a sea.” On the very next page, he wonders, “How many hearts can a place have … feel the heart kick / back, away / asking to be seen whole, broke / two halves folded to a near close.”

A related theme emerges around masculinity and getting in touch with our primal state in the great outdoors. There’s many a reference to stripping bare, skinny dipping, pissing in the forest—the speaker noting early on, “I wanted to be sensational   in nature male is beautiful.”

When the poems go beyond the landscape, they touch on the culture and communities of Great Lakes cities and towns—critically, from both outsider and in-group perspectives. Recounting a day spent with a short-term host and their acute lack of commonalities, he remarks, “I can appreciate   embracing the country   through a window.” But to conclude another account, where he and his family sneak into a state park to set up camp, he writes:

There’s a continuous grappling with the tension between identities—an Arab American from a region that itself straddles nationalities—threading through his register in experiences with locals as a “tan man,” memories of childhood and holiday gatherings, and invented lore around lost cities of the Great Lakes.

Naturally, concern over our climate crisis and the speaker’s environmental dread seep into the writing. This takes the form of worried statements injected into descriptive scenes, one prolonged imagining of a future dystopia—but, most poignantly, as poems of address and appeal: “Please be real beach and please be real sand   And have been   from here   before men and women and all Corollas … please, outlive me.”

This framing allows us to read the traveler’s obsessive capturing of the landscape as an attempt to preserve it, to give it the justice it’s due, and epitomizes the book’s move toward entreaty and tenderness for the Lakes despite their nations’ colonial history:

At times, the block form is broken up, with poems or parts of poems employing more traditional free verse enjambment—though still an inversion, aligned against the right margin. But in the book’s second half, there’s even more of a departure, with varied poetic “attempts,” lyrical experiments with a blues structure, and rhyming couplets. These feel essential, not just for their gorgeous use of rhyme and slant rhyme, but for the fact they often result in “failure”—the conceit kind of craps out, giving in to the established style in the book up to that point. It suggests the dominance of this mode of thinking over poetic containers, an inherent distractedness of a speaker eager to take note and collect every thought before it is lost. There isn’t time to measure meter or arrive at the perfect word—though the flirtation with form provides much appreciated variety.

It speaks to the author’s prowess to use drastic formal methods that still contain a cohesiveness of thought. One way this is achieved is through the loosened constraints of the language. There’s an understanding that connecting dots between ideas, words, or sounds on a page is much like charting a course on a map—there’s usually more than one way to get somewhere, and our attention is masterfully directed.

Nearing its end, as the book arguably goes more into ungrammatical territory, the reader has fallen into the book’s rhythm. The imagery becomes more unusual and abstract, the pacing and spacing of the lines more erratic, the content more traditionally confessional. That fierce interiority gets infiltrated by often perverse reality. It strangely paints a clearer picture of the speaker, disparate and desperate, no longer feeling ups and downs but a slowing, a staying put, an arrival somewhere:

we stopped   a   moment
midchannel   the setting    sky    was outrageous harmony

The last few poems wish for simple things: the ability to move on, a return to familiar places, a world where immigrants are not turned away from borders, where “power would go out / And all leisure would be more.” And the final one, the longest the poet has spent within any one moment, reflects on the end of his tour and the world’s inherent wildness. If there’s any conclusiveness it offers, it’s that our homes are as intricate and muddled as our histories. This world can be better, but it’s the result of infinite stories converging and for now, it’s what we have.

Even at a glance at the author’s website, it’s clear the overarching HOMES project has taken many years and many forms to iterate into the publication of this book. The impressionistic cover image, showing one scene spliced into two moments, is overlaid with hand-drawn lines suggestive of the author’s transposed, personal topography. It’s directly related to presentations and installations by the author, reciting sections of the work while tracing over and spilling water onto a map of the Great Lakes via an overhead projector. The blog that chronicles the original trip undoubtedly serves as a first draft.

Moments throughout acknowledge the act of writing this book as part of the larger project—“‘The environment’ was born as a subject for artists,” he once quips. Though it seems the project became so sprawling due to a depth of uncertainty, the unending questions that arise once we start to consider our relationship to nature at every scale. Soliman’s collection, a subversion of a captain’s log, feels like the tip of a melting iceberg. “I feel I will fight an obscure peace awhile   a love that’s unhuman”—it’s that unhuman love that’s so mysterious and worth private investigation from every one of us—“that’s what we’ll have some of.”

Will Russo is the Section Editor for Poetry with GLR.