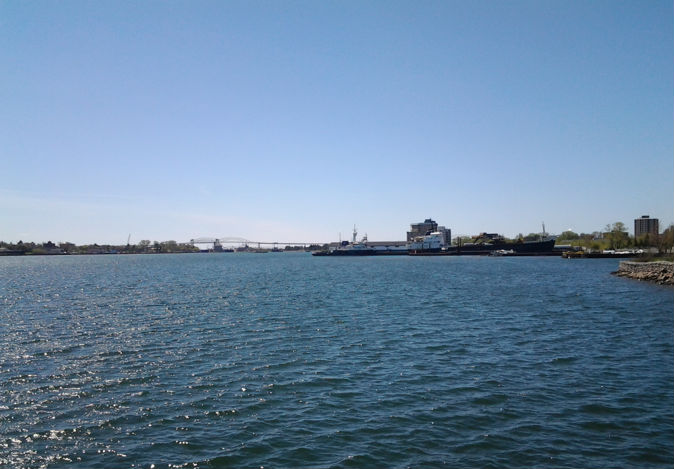 When Hemingway dipped his hook in these waters the First World War was not two years over. Prohibition had just begun in the United States and the ferryboat between Ontario and Michigan was the only official way across the St. Mary’s River at Sault Ste. Marie. Writing in 1920 for The Toronto Star Weekly, Hemingway called the fishing in the area, “…a wild nightmare.” The first people still call the waters and the villages nearby Baawitigong, which represents something like the sound of water over stone. The name has been Anglicized, stultified into hard syllables more accessible to the European tongue, into “Bawating” – a word that carries some of the meaning but none of the music of the original.

Although not as grand as Niagara Falls, or as storied as those on the St. Lawrence, the rapids at Sault Ste. Marie have teeth. Hemingway warned his readers, “It is dangerous wading in the spots that can be waded … for a mis-step will take the angler over his head in the rapids.” Before the dam, which stoppers the only natural outflow from Lake Superior, the sound of the water over stone was said to swallow all conversation within two miles.

In 1900, while Hemingway was in swaddling clothes in Oak Park, Ill., 62-year-old music teacher and daredevil in the making, Annie Edson Taylor somehow heard the rapids, muffled as they were from their unfettered glory by the new power dam. I like to think it was the roar of Baawitigong across the stones at the mouth of Lake Superior that sent her over Niagara Falls in a barrel the following year.

The river is a double-sided mirror with a city on each side each named by French explorers for the Virgin Mary. The “Soo” remains the only Canadian city with a French name to have banned the use of the French language for official city business. And Canada is a bilingual country. The word Sault is a lost word. It meant “leap” to the French voyageurs who tagged it to various water features across North America, but the word cannot be found in modern French dictionaries.

Someone who cares about hockey could fill an almanac with the names of players born here or those who have played here. But I hear the old rapids tear through the ages, see the whitefish leaping into the birch canoes of Anishinaabe anglers. When the Jesuit explorer-priests came through the area in the 17th century, they saw copper in the water and wrote of their findings. It would not be long before soldiers arrived to raise a cross on the river bank, to claim the land and the freshwater ocean beyond for King Louis XIII.

One of the first popular writer the area produced was Alan Sullivan whose 1922 novel The Rapids documented the rise and fall of an American industrialist named Robert Fisher Clark. Sullivan based his story on Francis Hector Clergue, an aspiring captain of industry from Maine, who almost single-handedly built the industrial infrastructure of the city. Clergue, or Clark as he is portrayed in the novel, saw the power of the rapids and its potential. The electricity came first, then the industry – a steel mill and a paper mill – followed by a city. The city was the aftereffect and not the reason for industrial expansion.

There are two Saults: A small Michigan town with a military base, the commercial lock that expedites more cargo each year than the Panama Canal and Lake Superior State University. Then there’s the larger Ontario Sault with its fading steel empire still chugging smoke and effluent, various government offices, a university and a college, hockey stars, a novelist or two, musicians and one world-famous astronaut after whom half of the city’s new buildings are named. Linked by a bridge that opened in 1969, the cities draw their boundaries along the river. From the Canadian side, the Otherworld is south. From the American side, the Otherworld lies north. The river between binds and divides, roots and severs, while it changes and remains unchanged.

Mark Dunn has published two books of poetry, Ghost Music ( BuschekBooks, 2010 ) and Fancy Clapping ( Scrivener PRess, 2012 ). The former has a chapter/section of poems that come from the river. He is currently working on a new collection of poetry, a book about marriage and a novel set in 1900 and a decade or two after.