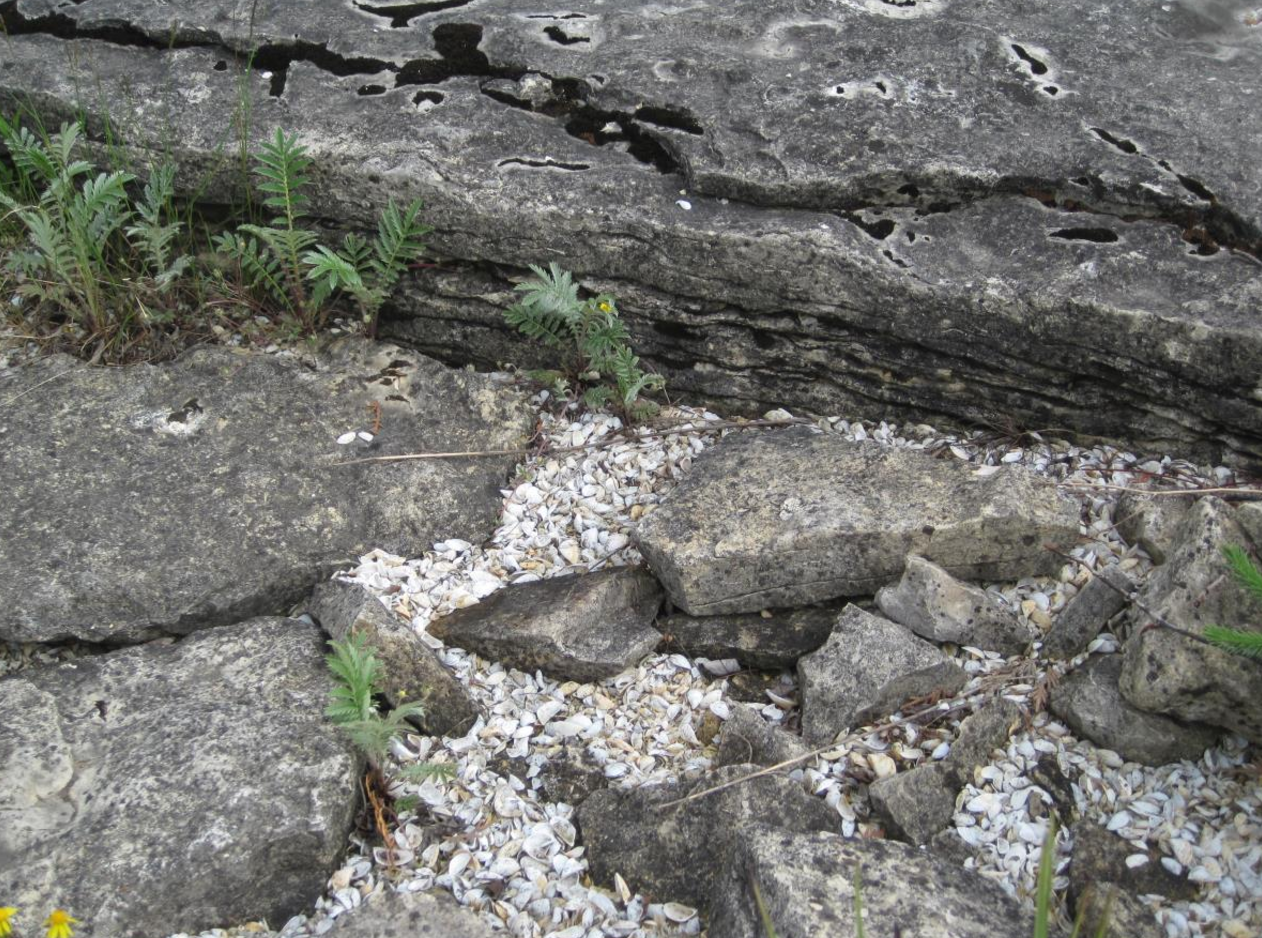 I’ve been tracking the Niagara Escarpment, a geologic formation that arcs from Wisconsin through upper Michigan and Ontario past Niagara Falls into western New York. In the Upper Peninsula, Seul Choix Point interrupts a long stretch of Lake Michigan shoreline, between the Garden Peninsula on the west and the Mackinac Bridge on the east. The name comes either from French explorers who thought the point the only choice–“seul choix”—for shelter between Mackinac Island and Green Bay or from a distortion of an Ojibwa word, “shashoweg,” the straight line. As my wife and I approach, I ignore college French lessons and use the local pronunciation, “Sis-shwa.” I want to see the way the Niagara Cuesta slides under Lake Michigan here.

Passing the Seul Choix Lighthouse to reach a path through the trees to the shoreline, we emerge onto a broad flat rock beach, its surface uneven but mostly uniform. Shrubs and grasses grow in crevasses and deeper indentations are filled with either lake water or layers of small white shells. We weave our way toward the water across eroded strata, broken chunks of flat rock lying in small pools or in the midst of shells. Dark mosses spill over cracks and fractures. Just offshore glacial erratics rise above the waves. It’s an overcast morning, and the waves match the grayness of the clouds and the grayness of the rocks.

In a satellite view of Seul Choix Point the shoreline appears almost striped. The bordering tree line is deep green growth, succeeded by a narrow strand of dark gray, the surface we first encounter, then a wider strand of white paralleling the dark gray. The gray of the waterline forms the next strand, clear slabs of rock, often fractured or jointed, jagged at the edge where rock is submerged. The lake is bright green near the shoreline, in contrast to the darkening green of the waters a little further offshore. The colors of the lake provide a sense of its varying depths and the distance below the lake that the Niagara Cuesta soon slopes.

Where the rock surface is most uneven and depressions most pronounced, I squat low to consider what’s been exposed by the elements. Some rocks broken from the cuesta are rounded and smooth, having undergone considerable weathering in Lake Michigan waves. Other rocks are almost neatly formed, flat on the top and the bottom, mostly straight on the sides, as if chiseled off the strata nearby. They resemble on a small scale larger slabs in the talus below cliffs and bluffs along the Escarpment, wherever the scarp face is prominent. Here, when I step off the continuous surface into rubble and shells, I see the exposed edge of the rock and the tight layers of strata that built up over time to form the cuesta. The rock edge seems as neatly cleaved as the walls of a quarry or a cliff face. I wonder if, somewhere offshore in the depths, an escarpment carved out of the cuesta rises above the lake bottom.

Sue and I slowly circle the point, pausing now and then to watch waves rolling in, offshore erratics resisting them, clouds drifting slowly above the lake. From time to time we trudge over huge mounds of white shells, so thick and dense they bury the rocks and add another layer of strata to the coastline.

Eventually we find an opening in the trees and ascend to an open, grassy area near the parking lot. We see a few more newly-arrived vehicles, surfboards unloaded from rooftop carriers propped up against them, men gearing up into wetsuits. My images of surfing are mostly west coast ones as well as, more recently, memories of our grandson surfing off the Florida Gulf coast. Lake Michigan never struck me as a promising body of water for surfing. Curious, we stroll over to the men while in the distance other men carry surfboards toward the shore.

When we ask how the lake could be deep enough for surfing, the men tell us that, though the near coastline is only ten feet deep, further offshore it becomes 40 feet deep, guaranteeing good waves when the summer wind blows north up the lake. Sue asks about the seemingly billions of shells on the beach. The men identify them as zebra mussel shells, washed in each year by the same summer waves that make good surfing here. In other times of the year, when the winds shift, the mussel shells are deposited profusely at the southern end of the lake, along the Indiana shoreline. We trudge glumly back to our car, images of mounds of zebra mussel shells now competing in our memories with images of the exposed cuesta on Seul Choix’s shoreline.

The zebra mussel is a persistent and prolific invasive species, an Asian mollusk brought to American waters in the ballast of international freighters. Over the past several decades they’ve had a deleterious effect on native mussels and fish by interrupting the food supply of larval fish, smothering native mussels, clogging water intakes for utilities, and coating boats and docks. They reproduce rapidly, have no natural predators in North America, and caused a decline among commercially fished species, including lake whitefish.

As we first crunched across the empty mussel shells, I was only mildly irritated at being hard-pressed in places to examine the cuesta that centuries of wave action might have exposed. But driving away from Seul Choix Point I can’t stop thinking of the oldest rocks on the shoreline being submerged below the remains of a recent invasive species. I usually enjoy the sense of traveling back in time my encounters with the Escarpment give, feeling as if I’ve transported myself back into the Silurian period 400 million years ago. Yet now I can’t escape the memory of walking on mussel shells. It keeps me anchored firmly in the present far longer than I’d like.

Robert Root lives in Wisconsin and teaches in the MFA Program in Creative Writing at Ashland University in Ohio. He is the editor of “Landscapes With Figures: The Nonfiction of Place” and the author of “Postscripts: Retrospections on Time and Place,” “Recovering Ruth: A Biographer’s Tale,” and the forthcoming “Walking Home Ground: In the Footsteps of Muir, Leopold, and Derleth.” He claims he is writing a book about the Niagara Escarpment. Visit his website.