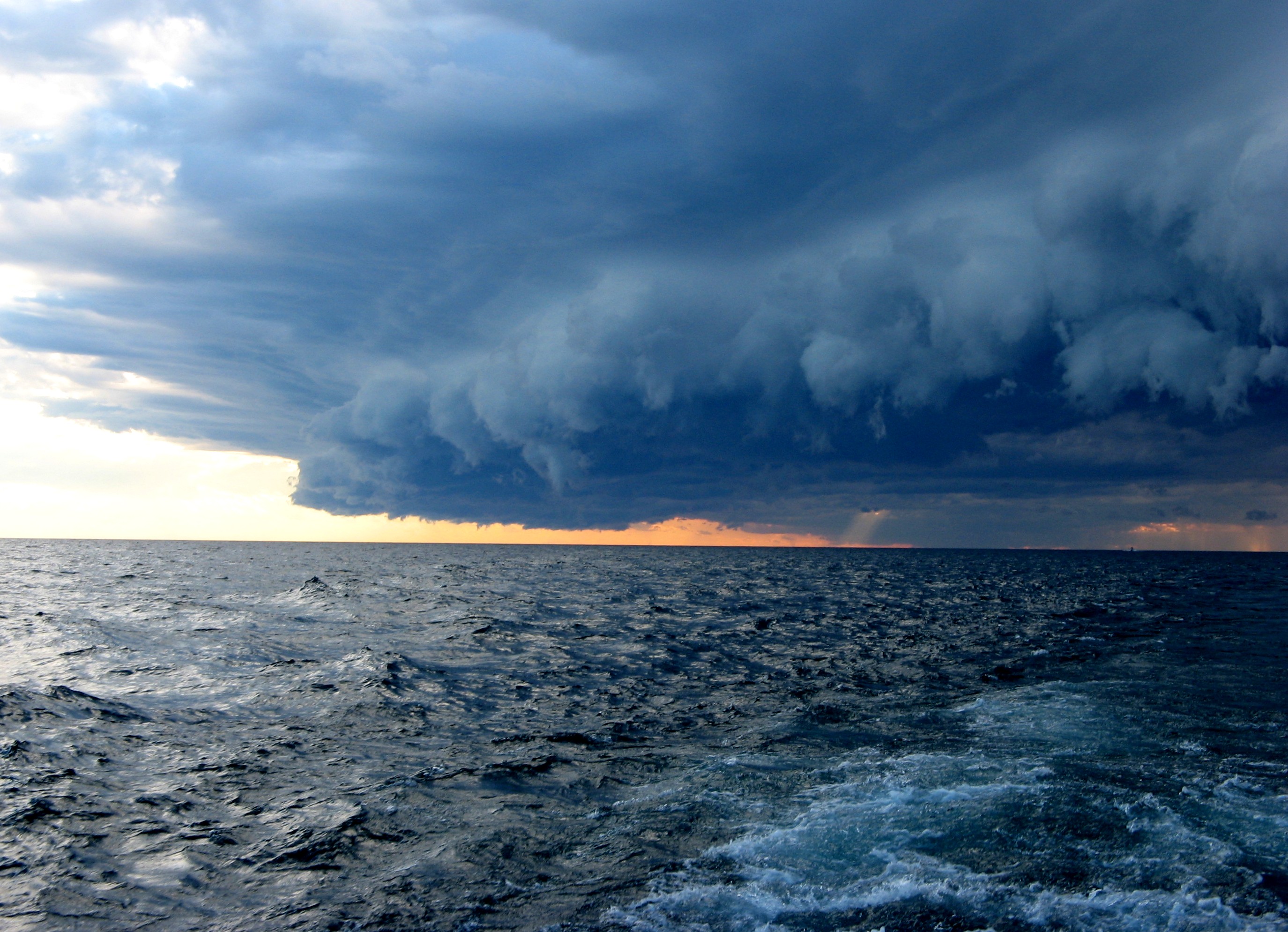 A hot summer day seemed perfect for the ferry ride to South Manitou Island in Sleeping Bear Dunes National Lake Shore. A nice family outing was in store for my parents and me with my daughter, who in the mid-1980s was in first grade.

Temperature about 93. . . pretty boat ride departing from Leeland across Manitou Passage under lumpy, piled clouds. . .a swim in the warm, pellucid water. . .a hike to the lighthouse. Finally, a picnic lunch before the return ferry. The sky looked a bit darkish. Maybe rain?

Like a window shade yanked down, a navy blue sky unrolled from the western horizon and raced over us. The turquoise water turned grey. The boat began to hit waves—slap, slap, bounce, slap. South Manitou receded in the rain.

“The return trip will be quicker with the wind,” said a girl in a crew uniform with forced perkiness. She had come down the ladder to the lower deck where we sat.

Scanning the waves, I saw tornado-like dervishes of water dance not far away. “Water spouts,” the girl announced, as incredibly she pulled down one of the life jackets. My unease ratcheted up to fear.

“Will we need those?”

“One of the passengers is very disturbed,” she said and left.

Chaos had erupted over the lake. Thunder, lightening, and rain bombarded the boat and water began splashing below deck. It was the madness of the marching brooms with their buckets in Fantasia—like Mickey we were caught in a nightmare.

This couldn’t be happening to us! We’re good people for God’s sake, just out for a day on the lake!

Though acknowledging the danger truly terrified me, I put my daughter in her Garfield lifejacket. My elderly parents sat tight together resigned like couples in the ballroom on the Titanic. I glanced between the lifejackets overhead and another family bent in prayer. Should we go above deck where we might escape from a capsize or stay below out of the rain?

The delicious, friendly lake had by now broken into pieces. I watched waves the size of my garage race toward and behind us. It was as beautiful as it was terrible. Hikers standing on the stairs to the upper deck screamed as we crawled up the rollers and tipped down the other side, their hair and shirts plastered to their bodies.

“Look at that one! Hold on!” they yelled over the wind. I tried to pull my daughter to the stairs where it might be safer, but she refused.

Finally, we could see Pyramid Point in the haze, and we entered the slight shelter of Good Harbor Bay. It seemed we might make it. I held my daughter less tightly hoping that from here perhaps she would float to shore.

At the dock a small crowd watched for smaller boats to return, which we later learned all did, despite all the Mayday calls. Wet and weak, we stumbled off the boat giving thanks to the captain. In the rain my family trudged along the dock through Fish Town to the Blue Bird restaurant. A waitress took us in, offering drinks and the restroom for comfort. “You poor, poor people,” she clucked.

About ten years later, an article in the Traverse City Record Eagle about storms included reference to this mid-1980s storm as unusually fierce in a hot summer of bad weather. The captain quoted said he figured the passengers thought we might not make it. Whether he included himself in this opinion wasn’t entirely clear.

The treachery of the Manitou Passage was well known to commerce but was a favored shipping lane because it was shorter route to Chicago. In fact, so many wrecks occurred there that two life-saving stations were built in 1901, one at Sleeping Bear Point and one on South Manitou Island. Today, there’s no need to experience a storm first-hand to understand disaster and rescue. The Sleeping Bear Point Coast Guard Station Maritime Museum at Glen Haven has dramatic photos, early equipment, and re-enactments of rescue drills.

Over the years our Manitou trip became a family legend. During a thunderstorm somebody would always say, “How about a little trip to Manitou today?”

Joyce Hicks retired from Valparaiso University, twelve miles from Indiana Dunes National Lakeshore. Much of her fiction centers on the lives of older people and has appeared in Passager, Uncharted Frontier, Still Crazy, Literary Mama, and others. Since her debut novel Escape from Assisted Living appeared in 2014, she has been at work on a sequel. Her love of Lake Michigan, especially in storms, has long competed with her fondness for upstate New York, her childhood home. Find her online at http://joycebhicks.com.