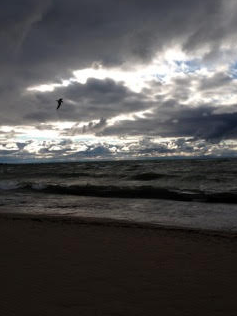 This nonfiction poem is part of the Great Lakes Review’s Narrative Map project.

Note from the author: I based this poem on a storm I experienced in Southampton, Ontario, in 2013. Lake Huron is the second largest of the Great Lakes. With its panoramic crimson sunsets, white sandy beaches, and grassy dunes, its beauty is unparalleled and draws throngs of visitors to its shores every summer. Yet what it boasts in beauty, it also boasts in power. Serene and playful one day, it can unleash its fury the next. This was never more visible than in the Great Lakes Storm of 1913. Also known as the Freshwater Fury, it assaulted the shores of Lakes Huron, Erie, Superior, and Michigan from November 7 to 10 and claimed the lives of over 250 people. In one day alone, Lake Huron took eight vessels along with their crews.

The roar of the lake
Challenges, beckons
I push my way forward
Hair streaming back
Eyes half shut

A couple, shuttered together
Hurry past
Away, away
From the angry surge
A predator in full pursuit

The waves, impossibly high
Six-foot, seven-foot,
Ten?
Barrel over each other
Spit their wrath
Onto the beach
Like rabid dogs
Behind a chain-link fence

The wind’s gnarly fingers
Rise from the lake
Whip through the sand
Tracing letters, words
Don’t underestimate me

I think of my grandfather,
His stories of the Great Storm
Back in 1913

“Twas a powerful spectacle,
That one
Many ships went down that day
Off Huron’s shores
Never seen anything like it
Before or since”

I find a dune, burrow down
Turn my attention to the sky
A single ray of setting sun
Boldly claims its place
Within the violent hues
The blues, the purples,
The blackest of blacks

A crack of thunder
A jolt to the heart
Seagulls rise
In a panicked, squawking chorus

A flash of lightning,
Pure gold
Streaks across the horizon
Then another, and another
Nature’s fireworks
Soundless, throbbing
Close

But I stay where I am
Held captive by this beast
By its sounds, its furies

Jennifer Hutchison teaches writing and English as a second language at George Brown College. She has also worked as a writer, editor, and translator for the private and public sectors. Short-story writing is a new, exciting realm for her. She lives in downtown Toronto with her husband, four children, and a giant Goldendoodle.