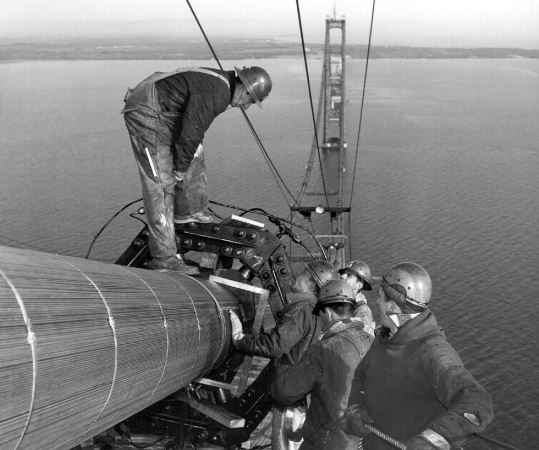 It rises before us, its two towers brightly lit beacons of a different world approaching.  It is five miles long, and allows for a twenty-three foot width of traffic, two lanes in each direction.  To a first-time traveler, it looks a bit ominous, even eerie.  Below its center, the Straits are 250 feet deep. Our car gets in line with a multitude of others on this chilly September evening. Gulls screech, circling above;  ferries make their last runs of the day.   Ships can pass beneath, as two hundred feet cushion roadway from water. Lake Michigan and Lake Huron meet here and their waters commingle. This is the Mackinac Bridge, the only means of car travel between Michigan’s Lower and Upper peninsulas, between Mackinaw City with its kitschy tourist shops and lovely, wooded St. Ignace, between the “mitten” and the land of the “Yoopers.”

We tune the car radio to AM 530, one of the two stations dedicated to bridge travel updates.  We’ve picked a good night to make the trip: clear weather, no delays reported.  As we queue up just outside Mackinaw City we lower the windows – the aromas of fudge and fish mingle in the air, a blended scent found nowhere else in Michigan and probably nowhere else in the world. The cold lake air is exhilarating.

For timid motorists, there is help. The Bridge Authority offers a “Drivers Assistance Program.” Anyone who is uncomfortable with the idea of driving across the Bridge can arrange to have their vehicles driven to the other end, for no additional fee. At least 1,200 drivers per year request this service. A humbling statistic. Should we be afraid? Some of them suffer from gephyrophobia, anabnormal fear of crossing bridges. Some have heard of the two vehicles that have fallen off the bridge (one blamed on high winds and excessive speed, the other an apparent suicide). Some are just nervous drivers. After all, the Straits’ depths loom below.

No passing, no speeding, we are warned. Who would pass or speed on this thing, we wonder.

Climbing higher, we remark that the bridge, “Mighty Mac,” is as old as we are, built the same year we were born. Completed in 1957, its construction claimed five casualties: two in falls, two in a catwalk collapse, and one from the bends, after ascending too quickly from an underwater depth of 140 feet. Those men would have been about the age of our parents. A plaque at the bridge’s southern point stands in their memorial. We wonder how many travelers notice it.

We are halfway over.  Mackinac Island and the Grand Hotel are especially visible from this vantage point. They are pieces of the past, watching the twenty-first century traffic whiz by. No motor vehicles are allowed on Mackinac Island, only bicycles and horse-drawn carriages. Fort Mackinac is there, built by the British, during the American Revolution, for control of the Straits. We drive on, two southwest Michigan residents heading for the part of our state where the delicacy is pasties and snow arrives most of the year.

It takes seven years to paint the entire bridge. When the project is finished, it begins again.

Each year on Labor Day there is a Bridge Walk. The Governor is first in line; no one may walk ahead of him or her. In 1992, President George H.W. Bush walked the walk, brought in by helicopter.

Walkers gather at St. Ignace, on the bridge’s north side, and finish their trip at Mackinac City. Bus transportation is provided in each direction for the intrepid hikers who, after leaving their cars at one end, are willing to wait in line for what seems like an eternity. In a typical year, somewhere between forty- and sixty-five thousand people participate;  it takes each of them about two hours to walk the bridge from start to finish.

It is faster to walk now than it was to drive then.

Prior to 1957, anyone who traveled from one of Michigan’s peninsulas to the other could go by ferry. Or they could take a long trip by car, westward around Lake Michigan, through Indiana, Illinois and Wisconsin, or eastward around Lake Huron and through Canada. Either way, they had to leave Michigan to get to the other part of it. Since then they can simply drive across the bridge.

We are descending gradually now, approaching land, approaching the U.P. Darkness has set in. The Mackinac Bridge is lit up resplendently, welcoming oncoming travelers, and bidding farewell to those departing. We have crossed over, and in a few moments will be “up north” in the truest sense.

Already, we are looking forward to the return trip.

Deborah Davis is a former equities trader who lives and writes in Richland, Michigan, near Kalamazoo. For many years she lived blocks away from Lake Michigan in Chicago, and near Lake Erie in Ohio. Ordinarily a bridge-phobic person, she drives the “Mighty Mac” happily and without qualms. Her work has appeared in Halfway Down the Stairs, Fifty Words Stories, and Searchlights and Signal Flares.