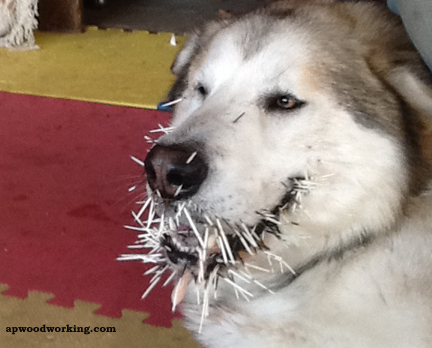 We adopted Helgi, a Giant Alaskan Malamute, just three days after Thanksgiving, and by our first spring together I recognized in him a shared personality trait, what I like to think of as tenacity, and what others might call stubbornness. Weighing in at 124 pounds, Helgi – Icelandic for ‘celebration’ – is an outdoor dog the size of a small pony with fur frosting white. As a hunter, you can always tell from the quality of his barking what he has cornered, and at four a.m. that spring morning I awoke to the high-pitched yelps that meant Helgi could only be celebrating one thing: porcupine.

I flew out of bed, banded a headlamp around my forehead, and shoved my feet into the first shoes I could find – my daughter’s garden Crocs. Wearing a thin, black slip nightgown, I charged out into the woods.

“No, Helgi. Leave the porcupine alone!” I yelled into the night, no moon, no stars. I followed the barking, left the path, and barreled up a hill that sloped along the east side of our house. The incline spanned a good acre, crammed with deadfall and spindly branches that poked and stabbed through the flimsy Crocs as I wobbled along, screeching, “You will NOT eat this porcupine, Helgi! You will NOT!”

We had other dogs get quilled before, but Helgi was the first dog that tried to eat the bugger. Three weeks prior, when the porcupines came out of hibernation, Helgi came onto the porch, paws bloodied and head slung low. His face wore a thick beard of quills, the ivory points long and tipped elegantly in black. Helgi couldn’t close his mouth or lie down or drink water. He swung his head between bruised paws and stumbled blind with pain.

Five-hundred dollars, forty-eight hours, and one overnight stay at the emergency vet hospital later, he was back to his sweet-natured self: a gentle giant with the tongue of a butterfly.

The first time the vet told us that Helgi had quills inside his gums, through his tongue, and all down the sides of his throat. The second time they speared through his nose like exotic African bone jewelry. The third time the quills were confined to a crowded patch around his snout; the fourth time I was so disgusted I could hardly look.

In the beams of my roving headlamp, I caught him leaping and pouncing around a downed balsam fir, tail raised like a flag. He barked and yipped and jabbed with his snout. I shone my light along the tree big as a canoe, and there was the porcupine, scurrying in circles with the halo of his quills pulsing like a shivering star.

We had spent nearly one thousand dollars on porcupine quill removal, and I was not going watch the last of our savings slip away. I broke off a spiney branch from the deadfall and wielded it like a jousting stick to prod my dog. Helgi snapped and growled. The porcupine dodged sideways and Helgi darted after him. I threw myself between them, standing in too-small shoes on a steep grade littered with woodland debris, wearing a stupid nightgown. I knocked into logs and branches, screaming like a crazy person. We fought and hollered in the dark for what seemed like twenty minutes before we ended up close enough to the house to wake my husband and two kids. They arrived, corralled the dog, and the porcupine escaped.

Porcupines can’t really run. They sort of wobble back and forth, their quills — though deadly in the face of a dog — are really no more than toothpick-sized straws that move together like waves of wheat. He was larger than a school globe but with a small face, and he held his hands in front of him fretfully as he hustled away. The porcupine ended up on our porch, standing in the corner like a chastened pupil, his back to the world. He stayed that way for nearly a full hour.

Meanwhile the sky turned a weak-kitten gray as my husband and I assessed our situation. That was when I finally accepted that as long as Helgi was our dog and that porcupine was in our woods, Helgi would continue to get quilled.

We found a box the size of a kitchen cupboard and nudged the porcupine inside – he went rather willingly. My husband took the kids and drove six miles up the road where they opened the box and let him waddle free.

After delivering the porcupine, we loaded Helgi into the back of the minivan. I had found a country vet willing to inject my dog with tranquilizers for a reasonable fee while I removed the quills. I had never done such a thing before, but the vet and his assistant taught me how to use the tools, how to fold back his lips and check along his gums, how to recognize signs of broken quills and squeeze them free. Helgi’s head is bigger than my head, and it was like rooting around inside the mouth of a lion, but I did it. I pulled the quills, plunked down my money, and drove home with our mighty warrior passed out in the minivan.

I drove alone along the back county roads, properly dressed and wearing sensible shoes. A train pulled up on my left, long and sleek and also northbound. I matched its speed and we sped alongside one another as the fields went flying by. I rolled down my windows to hear its roar and we burst through the orange-gold air.

My dog has the intelligence of a toddler and yet we share a mindset. I also believe that if I just try harder, don’t give up, then I’ll get what I want. But sometimes that way of thinking only gets you a mouthful of quills. Sometimes, the right thing to do is just walk away, let it be, and pay the bill.

Carol Dunbar is a vegetarian food writer and mother of two carnivores living off-grid in the woods of Superior, Wisconsin. Her work has been published in Literary Mama, the Midwest Prairie Review, and in the anthologies Writer’s Read Vol. III, and The Heart of All That Is: Reflections on Home, by Holy Cow! Press.