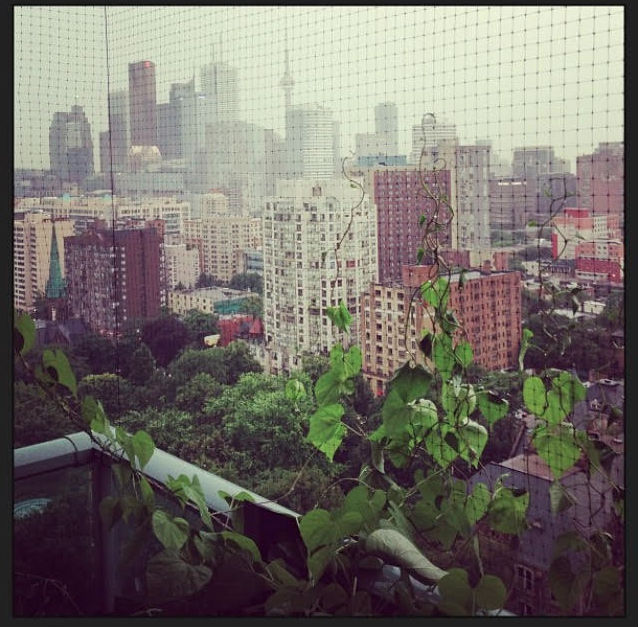 People who live in small towns or smaller cities will almost always question why anyone would ever want to put up with the dense crowds and the bums and the traffic and the garbage and the construction and the expense of living in Canada’s largest city.

We shrug and cite the obvious answers. We talk about concerts and nightlife, having everything at our fingertips, of having a planetary menu available to us, of having access to art galleries and festivals, both musical and cinematic. We brag with a smile that we can afford the high rents because we aren’t burdened with the expense of owning cars. Instead we have an adequate transit system, a reliable bicycle, and cabs like sharks on every corner in constant search of fares. But the truth is that we sometimes forget why we live here, and during those moments of defending ourselves with our rehearsed speeches, in the back of our mind we’re considering how much simpler life would be if we were to move to a small town. What an incredible luxury it would be to have a backyard with nothing but the sound of crickets in our ears while we sit and drink local craft beer, gazing at stars unseen past the light pollution of the city.

For a few weeks now I’ve been asking myself this question. Life has been busy. Too busy to enjoy all that this city has to offer. I’ve been stuck within the three-block radius of my apartment—work and my daughter’s daycare steps away. My wife’s job is a fifteen-minute ride to the financial district and when we have “free time” it’s spent in the park across the street watching our daughter test gravity on the jungle gym and learn the importance of sharing. I’ve been getting cabin fever. My bicycle—faster than transit in the core, cheaper than cabs and less smelly and cramped than the TTC—has been sitting, dusty and unloved and longed for in our building’s bike room for the past month.

We live in a high-rise on the edge of Cabbagetown; a neighbourhood where million-dollar homes with manicured lawns share their postal code with co-op housing and crack dens.

Today I had an uninteresting errand to run on the other side of town and I woke slowly during my ride, clicking my bell in hope of not catching the open door of cars since Little Italy was cramped, the bike lanes occupied by delivery vans and cars under the false impression that hazard lights give them legal immunity. I was twenty minutes early for my appointment and I found a cafe I’d never noticed before where the baristas wear bow ties. I drank a double espresso on the patio while eating a prosciutto and mascarpone croissant still warm from the oven, too distracted by the life of the neighbourhood to read a single page of the book fanned between my fingers.

I went to my appointment then started home.

I rode back across Dundas for a change of scenery. I rode through little Portugal and saw the new restaurants and shops that had opened there. I stopped to read menus with the promise to bring my wife on a night when we’d have a sitter and few hours to ourselves. I crossed Ossington passed the rows of white movie set cube vans embraced by orange pylons and stopped at the edge of Trinity Bellwood’s to watch hipsters drink tall-boys against trees, chain smoking and talking about Twitter, organic beard oils, or whatever. I rode past the skate park on Bathurst, turning into Kensington Market, past thrift stores and restaurants and bike shops—the streets littered with buskers and families and the weird art kids playing in the park. The stench of fresh fish and Big Fat Burrito burned into my nose. I wanted to park in the market and walk and take my time to enjoy all the graffiti and cultural clutter, but didn’t. I rode over to Spadina to marvel at the congested street markets in Chinatown; raised voices in foreign tongues. Back on College I wove through U of T, gawking at the majestic century old buildings and the bars and the mountainous mirrored hospitals ahead of me on University Ave. I wanted to browse the U of T bookstore or grab a pint on the patio of O’Grady’s. I wanted to grab a coffee and sit with my book on the lawn in King’s Circle or Queen’s Park. At the light, a girl on the bike in front of me spun around, smiling and wiping sweat from her brow. “Do you hear that?” she asked. “It’s so quiet.” And it was. There was nothing but the small sound of a horn solo bleeding from the thin speakers of the hot dog stand across the street—not even the screeching of streetcars rolling across rusted tracks.

At home I hooked up my daughter’s bike trailer, and after my wife met me at daycare, the three of us rode to Riverdale Farm and we ate ice cream and hot dogs at the park’s edge. This city is always changing, always new, and we will always be tourists.

From the balcony of our apartment I can see the stage lights at Dundas Square flickering against the skyscrapers in the core and can hear the roar of the crowd welcoming the band to the stage, the thick kick of a bass drum finding its tempo. Those in smaller towns and cities would consider this noise pollution, but, with my wife and daughter sound in their slumbers, and tonight the first night of NXNE, I decide to hop on my bike to ride down and join the crowd, to yell and applaud and welcome them to our city.

Darren Bradley Jones is a recent graduate of The University of Toronto's Continuing Studies Creative Writing Program, has published several short stories with a variety of journals, and is working to find a home for his novel while working on a linked story collection. He lives in Toronto with his wife and daughter and rides his bike everywhere. He can be reached at darrenbradleyjones@gmail.com.