When I talked with poet Julie Babcock this winter she was finishing the semester teaching at the University of Michigan, excited about starting a new journal, and enjoying the events surrounding the November 2014 release of Autoplay (MG Press) her debut book of poems. The poems in Autoplay describe Midwestern territory defined by American history, local landmarks, and the narrator’s imaginative leaps that take us from Ohio to Wonderland and Valhalla while exploring the too real hazards of growing up female. Jeff Pfaller, an editor at MG Press, is drawn to “her notion that if you call the Midwest home, your past becomes something you want to run from but ultimately cannot shake. It becomes something you wish you could transform, but is indelibly tied to place.” When she came to chat, Babcock was charming and fiercely thoughtful, and very polite about the aggressive flavor of the well water at my house. If you’re at AWP in Minneapolis this year, check out Babcock’s Saturday panel, “Who We Are in the Creative Writing Classroom: Interventions in the Craft vs. Context Fight.” She’ll be reading at Lyon’s Pub that night for MG Press. – Meredith Counts, Managing Editor, Great Lakes Review

GLR: What’s happened since the book has come out?

JB: I was thinking about my younger self, and those visions that when you have your first book everything is going to change, knowing even as I was creating that fantasy that it wasn’t true. It’s been fun to realize how wrong my fantasy was. I’m teaching every day, and taking care of my son. Inside that are a few readings here and there… Life continues as it does and writing is a practice more than a product.

It doesn’t really change my daily world view except I feel a little bit more part of the poetry community and when I go to AWP I’ll be at a couple of book tables and events.

It’s taken so long for this book to come out that I’m working on several other writing projects. I’m hoping to read in my hometown this summer, that’s in the works.

GLR: To take Ohio back to Ohio. Will it be like when you translate a translation, that it might not even be recognizable to the people that it’s about?

JB: I’m really curious! I grew up in this small town and never moved until college. I haven’t been back in ten years, even though it’s only three hours from where I am now. I had school friends from Mount Vernon who I see on Facebook bought the book – maybe people who don’t read a lot of poetry but are still living in that place. I wonder how they’ll experience the book, I hope it’s a good experience.

GLR: Anything that gets anyone buying poetry can’t be bad.

One of the things I really like in these poems is this contrast between the regionalism, these really concrete places, like the Big Boy or the graveyard where kids eat ice cream, but then you have Oz and Wonderland, and fantasy characters like Johnny Appleseed,  Jonah and the Whale. Is that trying to put some magic into the real place?

JB: I definitely am. Part of my experience growing up in Ohio was fairly – I don’t want to say banal, but there’s this – flatness. This everyday, day-to-day living that was not presumptious in any way. You got up, you had a job to do, you did it, you came home and went to bed. In Central Ohio there aren’t as many models of difference or otherness as in a big city.

GLR: So you get those models, as a kid, from books instead?

JB: Yes! Books can be really abstract and out there. Like, I’m on track in a really clear way, or I’m in outer space, or I’m inside a whale. (Laughs)

GLR You said that having the book come out makes you feel a little more connected to the poetry community, and people have great stuff to say, do you feel like you fit in with a school of writers? Are people doing same things that you relate to?

JB: This notion of poetry schools and affiliations, hanging out with poets has helped me to understand that I can be obsessed with what I am, that I don’t need to worry about how it connects to ideas about poetry, and that strangely enough that brings me closer to the conversations that they’re having rather than if I made some theorist move to situate myself.

GLR: It sounds like that allows you to commit to your own voice whether it snaps into place with someone else’s dogma.

JB: Yes. Part of my teaching is getting students to listen to their own concerns, pay attention to those and figure out what they’re curious about to broaden that conversation and understand “I am a part of this conversation and I want to know how this works.” My journey as a poet has strangely been to become more conscious of what I’m particularly doing so I can see the way my work resonates with what other poets are doing, rather than the other way around.

GLR: You’re publishing fiction, too. Did you study both? 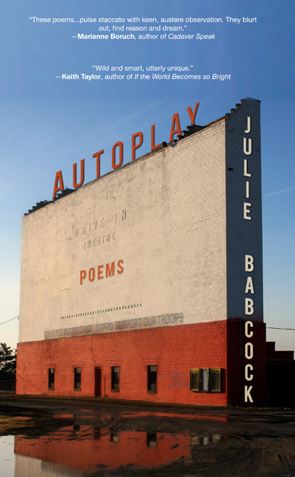 JB: I did! I’ve always written poetry and fiction. I’ve always loved writing. I taught myself to read from Shel Silverstein’s “Where the Sidewalk Ends.” I have that book memorized still, I performed those poems. I won a second grade talent show for performing “Paul Bunyan” in overalls and a flannel shirt… there was a grainy picture in the Mount Vernon News.

Anyway, I got an MFA in poetry and went on to do a PhD in Fiction at University of Illinois Chicago. A lot of places where they have Creative Writing PhDs, writing is separated from lit studies. At UIC there are workshops but there’s a huge literature component. So I have graduate degrees in both.

GLR:  I saw on the University of Michigan website that one of your interests is Women’s Studies. Let’s talk about that in terms of AUTOPLAY, because you have some delightful and tough girl and women characters here.

JB: That idea of being set up in an established system, a daily thing that you’re supposed to take for granted and not question, is something that can be really devastating when you’re not in a position of power.

GLR: Like, to be told “you’re a girl, here’s your girl things, go do girl activities”

JB: Right. Or these are things you just have to put up with, these are realities of your life as a woman or girl. And then trying to imagine outside of that is double challenging. I think the poems in here where girls, mostly, are experiencing some kind of violence whether it’s sexual or an uneasy kind of familial structure. Giving voice to that tension really concerns me. Thinking about, how do you live in a small town or place with expectations on how power in relationships is supposed to go.

GLR: Tell me about the process of putting AUTOPLAY together. A lot of the poems have appeared in journals, and I know the title changed, and I heard you say at a reading at Literati Books in Ann Arbor that an editor suggested you add more poems.

JB: It’s hard for me to say how long I’ve been working on this book, because I’m not sure how long it has been this book and when it was an earlier, different project.

The earliest poems in there are the persona poems, I’ve always been attracted to that form. So there’s one in there about Alice in Wonderland, one about Pinocchio. Those are older pieces, then skipping some time to about four years ago my brother graduated from Ohio State and John Glenn was the speaker. At that point I was really thinking about astronauts, and I was sitting in the stadium, trying to amuse myself as graduation went on and on, and I was thinking about the phrase “Astronaut Ohio.” I came up with that phrase and concept at my brother’s graduation, listening to John Glenn, and it was at that moment that I really understood what kind of collection I was writing and that it was much more about place than I thought.

Those earlier poems with Pinocchio and Alice were sort of place-less, their stories from two different countries.

GLR: The finished book is very rooted in place.

JB: That was an important shift for me. And that was how I got the original title, Astronaut Ohio. Then I changed it because editors really liked the collection, but said a title about Ohio was too specific. It seems strange because we experience place in a literal way but also in a psychological way that’s much more united across different localities. While I see this book as being about Ohio, in the shorthand, I also see it as being about a more general place where you’re trying to see more options and having a difficult time bring those options and your reality together.

The magical jumps that all human beings are capable of fascinate me, and fill me with a lot of hope, the ways we create and recreate things.

JB Christina Olson was my editor and she was really helpful with this work. She had suggestions about reordering some of the poems at the end of the book, and asking me for more. I added three poems – two are erasures, the only two of that form in the collection.

The end poem was originally “Astronaut Ohio,” which I think is an inspirational poem because it’s, like, “I’m gonna get out of this galaxy! I’m gonna do whatever!” I am so interested in those moments, but there’s always something that pulls us back down or tethers us. The last poem now is an acknowledgement of that as well.

GLR: You bring us back to earth with an object. It’s an object that’s full of possibility but it’s also a thing you can hold in your hand, it’s not trying to fit all of your future and longing for adventure – it is a totally different note to end on. Either, “I’m blasting off, or on land.”

JB: But still surrounded by water! It’s actually not my most realist poem, either (laughs).

I see things I’m obsessed with recur in different ways through different genres… I used to think that I was really sporadic with my tastes and knowledge base. I worried I wasn’t connecting anything, but now when I think about my writing I worry “maybe somebody is gong to notice that I am writing about the same thing over and over again.” Obviously neither one of those is true, but I may have a central thing I can’t stop writing about.

GLR: Yet you’ll always find new ways to look at the obsession, and new research. If the longing for adventure is the sun in your mental solar system, you’ll find all sorts of different things orbiting it.

JB: I like the idea of orbits. I was at the natural history museum on campus the other day. They have a big piece of meteorite, or a cast or whatever, that you can touch. I’d like to think it’s a real meteorite that I’m touching.

You can fine Julie’s book at the Midwestern Gothic website.