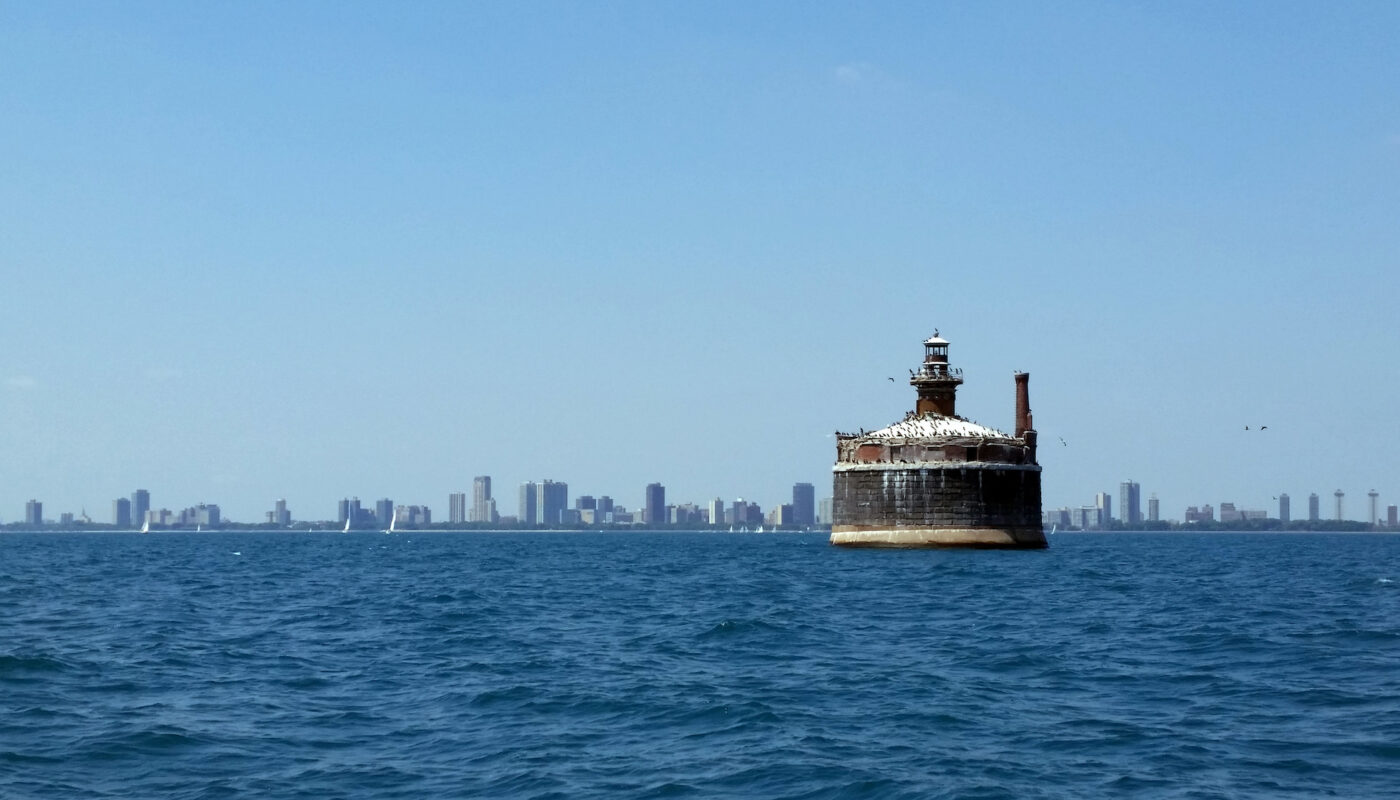 It keeps a distance, out on the water. From the shoreline, you can only make out its shape: short and round, with a low conical roof like a granary, and what looks like a chimney on one side. On a clear day, it’s the only thing separating the cloudless blue above from the waveless blue below—a kind of beauty mark on the stern lip of the horizon.

Friends and I often met on Chicago’s eastern edge, where we lived and went to school, and where Lake Michigan was never more than a few blocks away, almost always in sight. That distant stony structure was a tranquil place for our eyes to rest as we sat facing eastward at a lakeside park, or became a point of interest within the natural pauses of our conversations. It was a retired lighthouse, a watchtower, a one-room hut for a fisherman or wise man. An abandoned laboratory, a circus tent floated off from Navy Pier, or the Taj Mahal. We didn’t know, and we were comfortable not knowing. Maybe we even preferred it, because without a reality to measure our imaginations against, that structure was not simply one thing but many things at once. It accepted the multiple histories we wrote for it; it housed all our fabled soothsayers and Shahs. On the horizon was something capable of storing those many fantasies we gave it. And storing away copies of those many fantasies we gave ourselves.

We joked that if we could only reach it, we would discover its secret once and for all. One winter in college, as a group of us trailed the waterfront, returning from class, Paul dropped his backpack at our feet and ventured after it. He climbed over the rocky revetments onto a thick sheet of ice that had taken hold at the stone’s edges. He walked slowly, looking back at us only to joke through his fear—Tell my mom I love her!—or to admire the widening view of our campus blanketed with snow. When the ice began to crinkle at his feet, he took a few small rocks he’d gathered moments ago and threw them in the direction of the hut, in one final attempt at that connection. The rocks plopped into the water, glittering with shards of ice. Even the ripples came short by a few miles.

The hut’s small wonder accompanied us through college and the awkward time that followed, though always in the background of our more pressing concerns—Where will I live, what will I do, who will I love, and who will love me? Paul, who’d bravely gone over ice after it, had been between homes at the time, felt unsure of his chosen career path, and was in love with a mutual friend who didn’t reciprocate. It may have been pleasant to imagine a wise man in the hut, because in our perpetual reaching for it, we seemed to be approaching someone or something with answers to the many questions of our lives, lives we were just learning to live. In some sense, we needed the guide of a lighthouse, or a watchtower from which we could spot storms ahead. Some, a laboratory with tools that might detect incoming dangers. A circus’s reprieve from worry, or a sanctuary to protect us from what might come.

When I finally learned what the hut really was, a year after our college graduation, I felt a lot like the child in a classroom who has been let in on the secret of Santa. Proud of what seems to her to be very adult knowledge, but nostalgic still for a childhood she mistakenly believes she’s left behind. Courteous of her friends’ understandings; meanwhile lonely within the adjacent world she’s entered. It doesn’t occur to her until later that she might not be one of the first to know. The same way she’s now taken on the role of preserving her friends’ innocence, her friends had been doing for her all this time. All protecting each other, in turns.

At the time of my discovery, I’d been living near Wrigley Stadium, a few stops on the Red Line south of where we went to school, still a few blocks west of a lakeside park. On the steps of that park’s dilapidated clocktower, whose faces had all frozen at different times, the hut appeared almost perfectly centered on the horizon. In those late summer and early fall months when I had finally learned its true function, I went to the clocktower park to see it with no less frequency than I had those many months before. I went, knowing well that it housed no wise man or trapeze artists, and that there were several more just like it, in fact, several more century-old drinking water reservoirs dotting the Chicago shoreline. I went, knowing its dimensions in feet and its distance in miles, as rough-cut granite and steel; knowing it had been long retired, reserved only for emergencies that might not come. And I would have continued going to see it, even if I hadn’t learned it had been set for demolition by the end of that year.

The Wilson water intake “crib,” as it was officially called, had a name curiously fitted to how it carried us during that fraught passage into maturity. Friends and I had slowly forgotten the particulars of those lakeside conversations, but the crib seemed to preserve and protect everything within it. Locked in its steel caisson like the contents of a child’s diary were not only our dated imaginations of the hut’s identity, but also all those anxious stumbles and fervid feelings it witnessed through our college years.

The last time I went to see it, I went alone, on the way back from the supermarket, on a bright blue September day. The park was full of people. Dogs off their leashes circling their owners’ hammocks. Cyclists going a slow, even pace. A group of adolescents scampered along, smoothing their hair in strong winds, sending panoramic videos to friends who weren’t present. Videos in which that distant crib played an unassuming cameo.

There would be so much ahead we could not prepare for. But the sight of the hut in its last moments, as composed and still on the wind-wrinkled water as it always had been, seemed a final blessing. A presence, of many sorely needed things, in the luminous blue.

Photo by David B. Gleason.

Gabriela Valencia is the co-author of neuroscience research in the Journal of Speech, Language, and Hearing Research and Language, Cognition, and Neuroscience. Her poetry and essays have been published or are forthcoming in Watershed Review, Degenerate Art Literary Journal, Runestone, The Showbear Family Circus, Bird's Thumb, and elsewhere. Valencia received her Bachelor’s in Chemistry and English from Loyola University Chicago in 2018, and she received her MFA in Poetry from Boston University in 2022, where she served as Teaching Fellow and was a recipient of the Robert Pinsky Global Travel Fellowship.  Find her on Instagram.