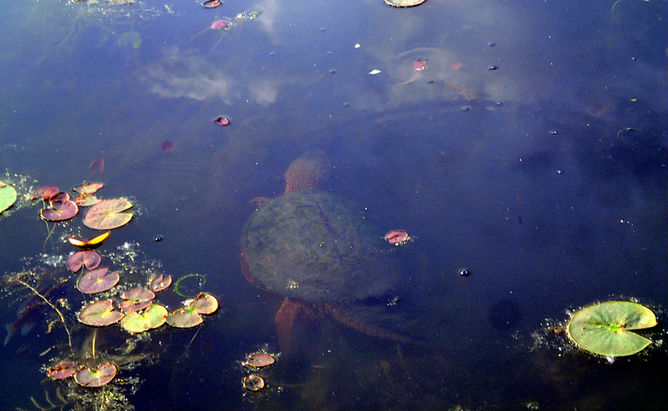 I grew up in a bucolic little Ohio Township, less than a mile from a 540-acre lake, created by the Goodyear Tire and Rubber Company in 1916 to create a water supply for its manufacturing operations.

Almost every day in the spring and summer, my younger brother and I rode our bikes to the lake, through our neighborhood, past whispering corn fields planted to the edge of the road.

We sped past the white house with the biting dogs where the farmer had murdered his wife and burned her remains in a barrel; pedaled past the compound of rotting double-wide trailers where the occupants raised a couple dozen goats on a tiny fenced-in plot.

We left our bikes where the train tracks crossed the road, and trespassed on the rails, listening to the frogs and red-winged blackbirds calling in the lily pads. The lake sprawled under the trackbed, under the ballast, spilled even further across the road, a wetland seeping toward our house.

We brought our fishing poles to catch bluegills and crappie and the occasional largemouth bass. We caught bullhead catfish, little olive green slime cats with flopping whiskers. We caught perch, runty and stunted and covered in black spots that suggested mold.

Railroad men had yelled at us from slowly passing trains, warning us for trespassing, but we never considered their threats to be serious or worth heeding. The lake was ours.

The summer after I graduated from Kent State University, the year I thought I was leaving Ohio for good, my brother and I set a trotline on the bank of Wingfoot Lake — five bluegill heads, threaded on barbed hooks, strung along a nylon rope, anchored to shoreline with a metal spike.

The next day we found the line pulled taught, and dragged twenty-five pounds of mud-black snapping turtle to the bank, thrashing in muck, tail and legs flailing as we pulled the cord hand-over-hand.

We prodded the huge and angry reptile into a large plastic tub and took it to our parents’ house.

I was going through a neoshamanism phase, and intended to eat the damn thing and wear its claws around my neck. But my brother and I were a generation removed from eating foraged reptiles and had only the vaguest concepts of what to do next.

We spilled the giant turtle out onto my parent’s backyard, the black rubbery monster wallowing in my dad’s lush grass. My brother goaded the turtle with a broom handle until it violently latched onto the stick, and he stretched its neck out to full extension.  I stood off to the side with my father’s axe raised, and brought it down, chopping its head off in a clean motion.

Then I strung a rope around its tail, and hung it upside down from a tree branch in the woods overnight.

We took to it the next morning with Buck knives and found its headless body still alive.

The snapper clawed my arms as I cut it down from the tree, and then pried its shell apart – jamming the Buck knife between the plastron and carapace, leveraging against its frantic scrabbling. It seemed to grab my wrists as I struggled to pull it apart.

My brother watched as the animal that should have been dead writhed underneath me. I had lost my intention, groping as blindly as the turtle. I grabbed foul sacks of its guts and pulled them free. Its heart beat in my hand, some strange prehistoric physiological quirk that allowed this turtle’s organs to function for hours without connection to its reptile brain.

I cut through mottled, leathery skin and found something that looked like meat attached to the limbs, to the tail. With grim determination, I carved those pieces off the carcass, and placed them in the bowl my brother held out away from his body.

We soaked the pieces in cheap beer, and hours later the golf-ball sized chunks still twitched with some kind of haunted nervous energy. I sautéed the flickering turtle flesh in butter, and threw the pieces into a box of Zatarain’s Jambalaya Mix. We gagged it down, every bite, as penance.

My grandfather had always talked about some recipe he served at his bar on Nimisilla Reservoir in Akron, where guys passed out on their stools after a day at the Firestone Factory, slouched against each other, eating turtle soup at the bar instead of going home.

When the cigarette machine went empty he couldn’t afford to refill it. When the tills came up short, my grandpa had to close the bar.

But he made it sound like you could just cast out, catch a turtle and make a soup.